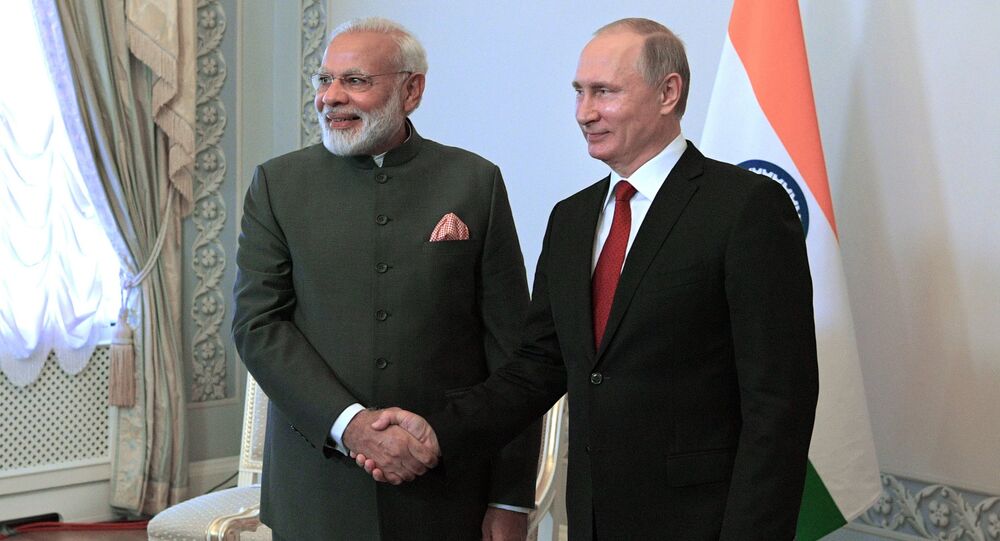 Russian President Vladimir Putin held talks with Indian Prime Minister Narendra Modi on the sidelines of the International Economic Forum in Saint Petersburg. Radio Sputnik discussed the results of the meeting and the prospects of cooperation between Russia and India with Nandan Unnikrishnan, Vice President at the Observer Research Foundation.

Commenting on the outcome of the negotiations, Unnikrishnan noted that the two leaders managed to bring relations between the countries to a new level.

"The results are better than expected. When Mr. Modi went on this trip, there were signs that the relationship was beginning to stagnate a little bit and that we were beginning to take each other for granted. But I think the two leaders have been able to resolve whatever problems were there and have clearly taken the relationship to another level," the expert told Radio Sputnik.

According to Unnikrishnan, one can speak of a certain breakthrough in Indo-Russian relations.

© Sputnik / Vitaliy Ankov
Putin Reveals Modi Talks in India Prioritize Struggle Against Terrorism
"I think so. In a sense, we've gone back to the days when our relationship was very dynamic and robust. I'm sure because of the uncertainty in the world at large today, there are bound to be some wrinkles in our relationship, too. But overall, it seems to be on a much surer footing now," he noted.

At the same time, there are several of factors that are hindering the development of mutual economic ties and that should be eliminated, Unnikrishnan argued.

"One of the major obstacles is the lack of a direct transport corridor. In other words, we have to go across the seas to reach Russia if we were to take any goods from India. There is a much shorter route, through the proposed north-south corridor through Iran," the expert said, adding that if this transport route could be effectively used, it would simplify the supplies of goods between the two countries.

Another problem, according to the analyst, is "the lack of banking ties."

"I think we need to improve the interaction between the banks in Russia and India. And of course, we need to create much more awareness in the business communities about each other," he explained, stressing that more than 80% of the Indian economy lies in the private sector.

© Sputnik / Maksim Blinov
Large UK Companies to Participate in Upcoming St. Petersburg Economic Forum
Commenting on a possible free trade deal between India and Russia, the expert noted that such agreement could be beneficial for both countries.

India could have benefits if it had access to the Eurasian market, while the Eurasian Economic Union could in turn participate in India's development programs, the analyst concluded.

Russia and India have signed nineteen cooperation agreements during the International Economic Forum in Saint Petersburg. Among the key joint projects between the countries are construction of two more units of a nuclear power plant in India and manufacturing of frigates.

The agreements were signed as Russian President Vladimir Putin held talks with Indian Prime Minister Narendra Modi on the sidelines of the forum.

The two leaders discussed a wide-ranging agenda including bilateral, regional and international issues of mutual interests, and ways to boost energy and trade ties.