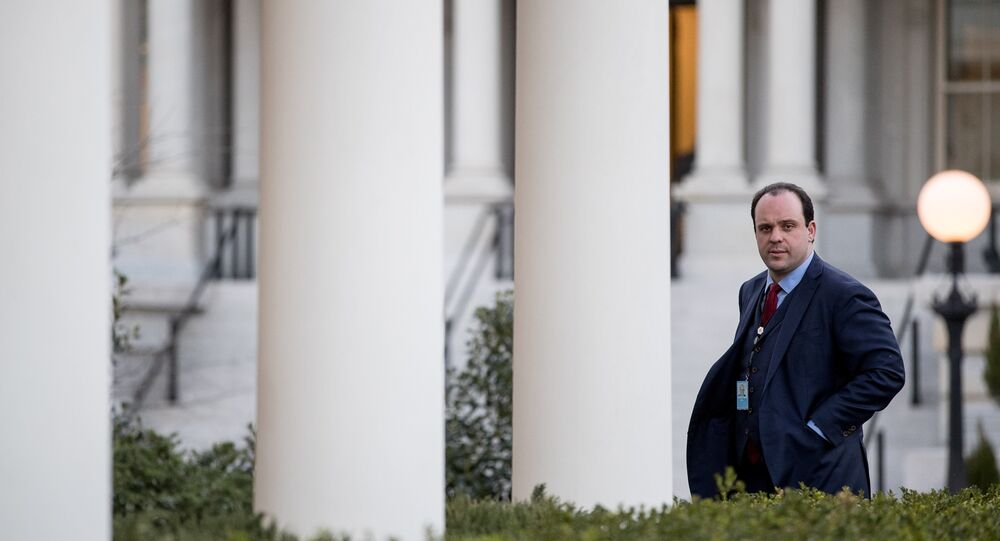 The House Intelligence Committee's attempts to engage Donald Trump's former press aide Boris Epshteyn into the "Russian investigation" is part of the Trump opponents' effort to discredit and impeach the US president, Russian scholar Pavel Sharikov told Radio Sputnik, explaining why they still have no grounds to kick off the impeachment process.

© AP Photo / Andrew Harnik
Ex-White House Press Officer Under Investigation in Russia Probe
US President Donald Trump's former press aide Boris Epshteyn has been recently brought into the spotlight by the House Intelligence Committee, which continues to seek traces of the so-called "Russian interference" in the US 2016 presidential election.

According to Pavel Sharikov, director of the Center for Applied Research of the Institute of USA and Canada at the Russian Academy of Sciences, Epshteyn's coming under scrutiny is yet another attempt to facilitate Trump's impeachment.

"Like many others, Mr. Epshteyn has received a broad, preliminary request for information from the House Intelligence Committee," Epshteyn's attorney commented for NBC News. "This is a voluntary request, Mr. Epshteyn has not been subpoenaed nor do we anticipate that he will be."

"We have reached out to the committee with several follow-up questions and we are awaiting their response in order to better understand what information they are seeking and whether Mr. Epshteyn is able to reasonably provide it," the attorney elaborated.

Speaking to Radio Sputnik, Sharikov underscored that "now there is no doubt that this is an internal political problem which is aimed at discrediting the Trump administration."

"The House Intelligence Committee, which summoned Trump's former aide, is comprised of ardent opponents of the [US] president. It was they who conducted most of the investigations and issued various statements regarding 'Trump's ties with Russia,'" the scholar pointed out.

© REUTERS / Carlos Barria
Ex-FBI Director Comey Cleared to Testify Publicly on Trump-Russia Probe
Sharikov drew attention to the fact that amid the ongoing media fuss no evidence has been yet provided to prove either alleged "collusion" between Trump's campaign and Moscow, or Russia's supposed "meddling" in the presidential elections.

"Therefore, the campaign continues, being blown up, and it certainly will not disappear in the near future," the scholar stressed.

The only aim behind the anti-Trump campaign is the US president's impeachment, the scholar believes.

"I have a suspicion that the purpose of this campaign is to initiate an impeachment procedure. Trump… enrages the Democratic Party members in Congress, but they have no grounds for the impeachment procedure. The only opportunity for them is to convict him of having come to power with the help of foreign forces. And here they have a problem," Sharikov told Radio Sputnik.

Epshteyn is not the only political figure related to Trump who has recently come into focus of the Democrats and the left-leaning US mainstream media.

© REUTERS / Kevin Lamarque
NYT Strikes Again: How Kushner Could Have Tried to Create Link With Putin
US President Donald Trump's senior adviser and son-in-law Jared Kushner has also been rumored to have "ties" with the Russians.

The New York Times claimed that Kushner was supposedly under scrutiny by the Federal Bureau of Investigation (FBI) because of interactions with Russian officials, such as Ambassador to the United States Sergei Kislyak, and that Trump's adviser made efforts to establish a channel between the White House and the Kremlin.

However, as it turned out, there is no credible evidence to back any of the mainstream media's claims.

"It comes back to the point: I haven't seen anything that leads me to believe that there was any wrongdoing by Jared Kushner or by the Trump campaign. I haven't seen that evidence yet, and there's a lot of speculation," US Congressman Sean Duffy told CNN.

The US intelligence community earlier accused the Russian Federation of trying to influence the US presidential elections. Moscow has repeatedly denounced the allegations as "absolutely unfounded," citing a lack of any credible evidence to confirm the accusations.

Meanwhile, Special Counsel Robert Mueller was appointed to supervise the investigation into "Trump's ties with Russia," the existence of which is denied by both the White House and the Kremlin.

Eye for an Eye: How Trump Helps China Ink Closer Partnership With EU