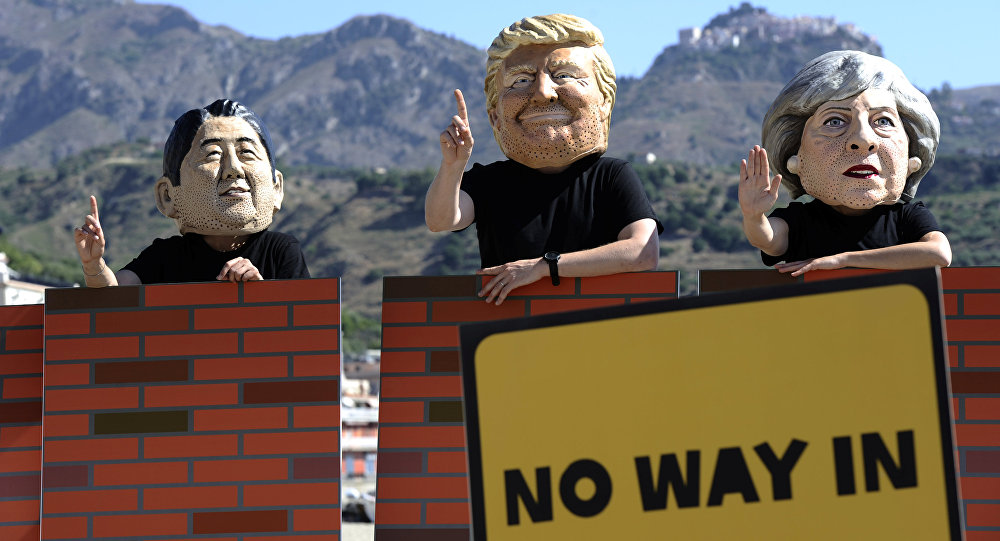 On Saturday, G7 countries wrapped up their summit in Taormina with a joint communique, expressing concern about the situation in the East China and South China Seas. Russian political analysts told Sputnik that the US and Japan used the gathering to intensify their pressure on Beijing instead of reaching consensus on global trade and climate.

© REUTERS / Jonathan Ernst
'Mealy Mouthed Platitudes Aside, Not Much to Be Said for G7 Communique'
The annual G7 summit, which wrapped up on Saturday in the Sicilian city of Taormina, Italy, ended with a joint communique in which the group stated it is committed to "maintaining a rules-based order in the maritime domain based on the principles of international law."

The statement expressed concerns about the situation in the East China Sea and South China Sea.

On Sunday, China strongly denounced the result of the two-day gathering, accusing it of interfering in the East China Sea and South China Sea disputes in the "guise of international law."

China has been committed to properly handling disputes, cementing cooperation and safeguarding the peace and stability of the East China Sea and South China Sea through talks and consultations directly with related parties, he said.

Lu urged the G7 and countries outside the group to understand the situation, stick to the pledge to take no position on relevant disputes, fully respect the efforts made by the countries in the region to handle disputes and stop making irresponsible remarks.

Sputnik interviewed a number of Russian political and military analysts who noted that the US and Japan have used the G7 platform to intensify their pressure on China. It was easier to write in an anti-China thesis into the final declaration than to reach a consensus on global trade and climate change.

Chinese Foreign Ministry spokeswoman Hua Chunying then retorted in Beijing that the South China Sea issue had "nothing to do" with the G7 or any of its members.

"China is resolutely opposed to individual countries hyping up the South China Sea for personal gain," she then said.

Since then, the situation in both conflict zones has relatively stabilized, however it found no reflection among G7 member countries.

© Sputnik / Aleksey Nikolskyi
China's Plan for New World Order: What Role Does It Leave to Russia?
Political analyst Mikhail Belyaev told Sputnik that long ahead of the annual G7 meeting, experts called it one of the most complicated gatherings in years, mainly due to the serious discrepancies among the member states on the issues of global trade and climate change. And mostly between the newcomer Donald Trump and the rest of the club.

"As they needed to adopt a final resolution which could be supported by all participants, they had to find a common denominator, a common platform which would unite all the participating countries. In this situation, the Chinese issue surfaced without any further discussions," he told Sputnik.

The political analyst added that all of them are cautious about China's growth. He referred to the recent survey of the International Monetary Fund and other international economic and financial institutions, which firmly put China as the number one economy in the world by 2050.

India is going to emerge as the second-largest, with the US ending up only third. Western Europe is set to leave the top ten, he said.

"Such a trend can't be prevented as the world is developing in this particular direction, however, both Europe and the US are trying to put up certain obstacles to it, to the best of their abilities. They have used the anti-China thesis and G7 platform tools to slow down this process," Belyaev told Sputnik.

© REUTERS / Jonathan Ernst
'Scandal,' 'A New Low': G7 Summit Promised Little, Delivered Even Less
Meanwhile, Alexander Lomanov, an expert at the Institute of the Far East in Moscow, noted to Sputnik that Germany, France, the United Kingdom, Italy and Canada are not just too geographically distant from the South China and East China Seas, the territorial disputes in these zones are not their main foreign policy priorities.

"It is only too clear that out of all G7 member states only two countries are interested in this issue, namely the US and Japan. The issue is so far-off for Europe and Canada, that, apart from abstract speculations on the righteousness of the existing world order, it bears no geopolitical or otherwise practical benefits or damage," he told Sputnik.

Nevertheless, he noted, the G7 policy on the issue will remain unchanged as the US and Europe will need certain leverage to pressure China for further trade bargaining and certain concessions.

Among other concerns, the expert noted China's One Belt, One Road project and its Maritime Silk Road initiative in particular. China has proposed to run it through the South China Sea and the Indian Ocean.

© REUTERS / Tony Gentile
Beijing Expresses 'Strong Protest' Over G7 Discussing South China Sea Dispute
This presents a major worry to the leaders of the G7 economies, who are resolved to stop Beijing in its efforts. This explains their concerns over the situation in the region, the expert said.

Russian military analyst Vladimir Evseev suggested that the pressure on China is of a particular interest to the US, thus Washington will go on with its policy of pressuring China on "its sore spots."

In such conditions, he said, it would be more rational for China to strengthen its cooperation with Russia, as it is only too clear that the number one geopolitical adversary of the US is not Russia but China.

Besides, he noted, the US remains if not an opponent then the main regional competitor of China. Hence it would have been strange for the US not to support its ally Japan.

Evseev also noted that the current policy of President Trump is to say a lot but to do little, and so he suggested there are unlikely to be any practical measures taken as a result of the G7 declaration.