'Mealy Mouthed Platitudes Aside, Not Much to Be Said for G7 Communique'

On Saturday, G7 leaders adopted a final communique following the group's Italy summit. Asked to comment, Australian foreign policy analyst and Fairfax Media columnist Tom Switzer told Sputnik that all things considered, communique or no, there are a lot of issues still left to be ironed out.

Asked for his views on the consensus apparently reached regarding Russia, Switzer noted that among the 39 points in the communique, "there's one point dealing there with Russia, and in the context of Ukraine; the general consensus there was that sanctions should continue until Russia completely implements its commitment to the Minsk agreements and respects Ukraine's sovereignty."

© REUTERS / Tony Gentile
West to Lose Russia as Partner in Fight Against Terrorism If Sanctions Enhanced - Lawmaker
Moscow has repeatedly reminded its Western partners in the past that it is not a party to the Minsk agreements, but rather only a guarantor to the Ukrainian settlement.

In any case, Switzer said that "but by and large, I wouldn't place too much emphasis on this G7 communique. For example, there is no consensus at all on the question of climate change. President Trump will make an announcement on that later in the week."

Asked about the apparent agreement reached in the communique about the need to fight protectionism, something that contradicts Trump's rhetoric on the campaign trail about protecting American jobs and manufacturing, Switzer suggested that "the first point you have to bear in mind about Donald Trump…is that this is a fellow who flips and flops with remarkable abandon."

"One of the first things he did as president was to pull the United States out of the Transpacific Partnership, which was a 12 nation trade agreement that included 11 other Asian-Pacific countries, and was seen as an anti-China trade agreement. Trump pulled out of that, but on the other hand, he has not supported a 45% tariff on Chinese goods, nor has he supported a 35% tariff on Mexican goods, which is more or less what he [promised] during the campaign."

"My guess is that the reason why he flips and flops is because the Republican Party, which he represents, broadly speaking, is pro-business and pro-free trade," Switzer said. "There are a lot of corporate lobbyists who have probably got a new [line telling him to] go slow on the trade issue. But he did win the election in part because he appealed to a lot of working-class folks who have been deindustrialized and displaced by globalization and technological change. He's in a bit of a bind, and that explains his flip-flopping."

© AFP 2019 / Brendan Smialowski
US Republican presidential candidate Donald Trump puts on a miner's hat while speaking during a rally on May 5, 2016 in Charleston, West Virginia

© Photo : Pixabay
Trump 'Wide Open' to Views on US Participation in Paris Climate Deal
Asked whether the G7 summit, the first for President Trump, French President Emmanuel Macron, and British Prime Minister Theresa May, was a sign of growing unity among Western powers, the observer suggested that it would be premature to make that kind of assertion.

"All things considered, it went reasonably well, but I don't think we should place too much emphasis on these things. One point that one needs to bear in mind is that the opposition leaders in both Britain, and especially in France – conservative leaders Francois Fillon and of course Marine Le Pen disagree profoundly with Macron on key issues, most notably ending sanctions on Russia; and the opposition leader in Britain – Jeremy Corbyn, also takes issue with Theresa May on those issues."

In other words, Switzer noted, "opinions in those countries are pretty mixed, and Trump himself is a bit of a character. There was some optics there of him being comfortable and boisterous in some of those photo ops, but I think there's a lot of unease among European leaders, especially given that Trump did not reaffirm America's commitment to Article 5 in the NATO Charter, which stipulates that an attack on one member state is an attack on all. That got a lot of tongues wagging back in Washington." 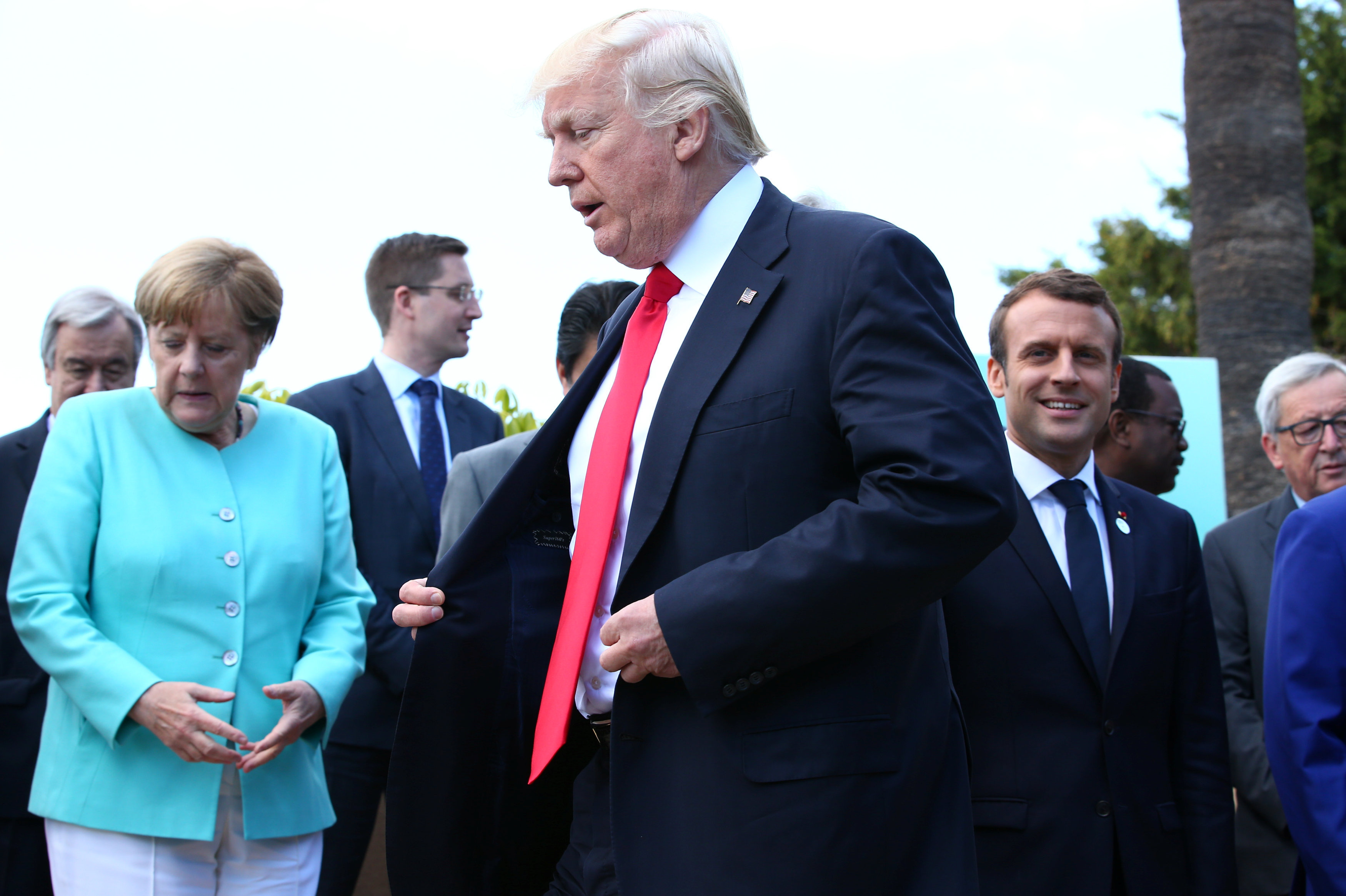 As for the overall results of Trump's first trip abroad, Switzer recalled that "he seemed to get a lot of praise in Washington for building up the US security and diplomatic relations with Saudi Arabia and its Sunni coalition partners. I would argue that Saudi Arabia and those Sunni Gulf States have indirectly sponsored those Islamic State jihadists, the al-Qaeda jihadists, the Syrian jihadists fighting in the Syrian civil war."

"Mr. Trump seems to have a real bee in his bonnet about Iran. Iran has no question supported Shia militias, but the cold hard reality is that most of the terrorism in the Middle East is driven by the Sunni jihadists. Donald Trump is supporting the Saudis, who have been in cahoots with many of these jihadists, and I think that's a problem. But again, in Washington he was well received, because that goes in accordance with establishment foreign policy."

© REUTERS / Jonathan Ernst
U.S. President Donald Trump dances with a sword as he arrives to a welcome ceremony at Al Murabba Palace in Riyadh, Saudi Arabia May 20, 2017

Switzer suggested that probably "the big thing to keep an eye on over the next few days is – what will he do on the climate change issue. Will he pull the United States out of the Paris climate change talks? If he does, that'll be a big story, although frankly, it doesn't really matter much, because Paris, unlike Kyoto, is not legally binding, it's not verifiable."

© REUTERS / Tony Gentile
Beijing Expresses 'Strong Protest' Over G7 Discussing South China Sea Dispute
Finally, regarding China's strong note of protest over the G7 communique's point about the East and South China Seas, which 'expressed concern' and 'opposition to any unilateral actions that could increase tensions', Switzer said that the reality is that China is a rising great power, and statements by Western statesmen aren't going to change that.

"History shows that rising powers' definition of their national interests grow as their power increases. So it's not surprising that China would like to seek a sphere of influence in what it sees as its near abroad…I'd say the same thing about Russia – Russia is a great power; it may not be rising the way that China is, but it's a power with legitimate security interests, and its own sphere of influence. So I think China is basically reaffirming that position," the analyst said.

"The reality is that most of the nations around Southeast Asia are slowly but surely accommodating themselves to a rising China. And although the United States has [carried out] four or five freedom of navigation patrols through that 12 nautical mile zone in the South China Sea, ultimately, neither the Americans, nor the United Nations are going to reverse China's assertiveness in the South China Sea," Switzer concluded.

Trump Brings to US Results of His First Foreign Trip Across Middle East, Europe