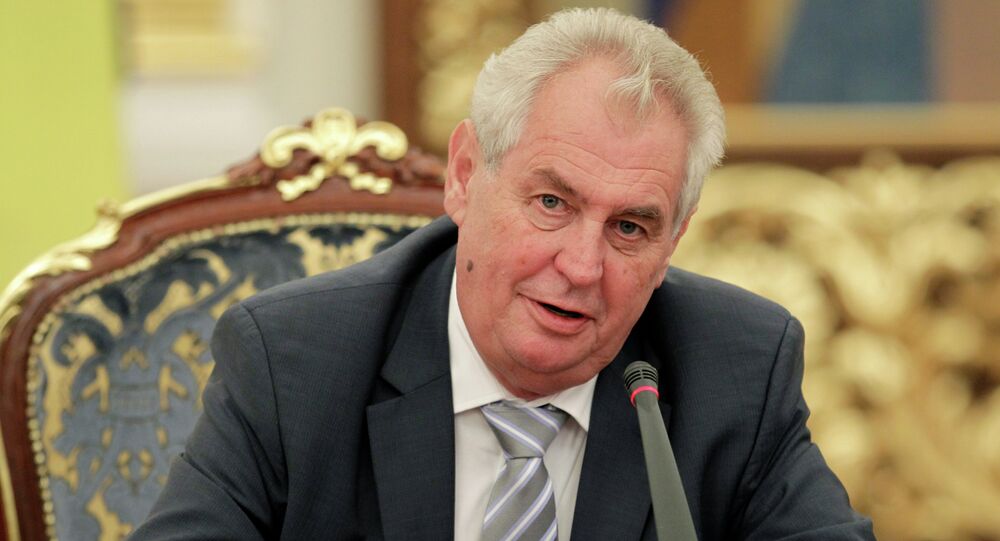 Over 35 percent of Czech citizens would vote for incumbent leader Milos Zeman in 2018, a poll shows.

PRAGUE (Sputnik) — Over one third of Czech nationals will potentially vote for incumbent President Milos Zeman at the 2018 presidential election, a poll by the Median research agency for Czech Radio showed Sunday.

"More than 35 percent of the respondents are ready to give their votes at the upcoming presidential election to current head of the republic Milos Zeman. However, the number of his supporters after May's government crisis decreased over the last month by 2 percent, mainly among the elderly people," Lea Michalova, Median's representative, commented on the results of the survey.

© CC BY 2.0 / European People's Party / EPP Summit, December 2015
Czech Deputy Prime Minister Criticized for Accepting Sudeten German Invitation
The number of the Czech citizens supporting another presidential candidate Jiri Drahos, the former president of the Czech Academy of Sciences, grew from 17 percent to 24 percent in May. According to the poll's results, the number of people who would potentially vote for Michal Horacek, the Czech entrepreneur and writer, remained at 20 percent.

The ongoing government crisis in the Czech Republic resulted from the row between Zeman and his political rival Prime Minister Bohuslav Sobotka over the suspected tax evasion by Finance Minister Andrej Babis. On May 2, Sobotka who has been leading the country’s coalition government since 2014, announced the resignation of his cabinet over the disagreement with Babis whose entrepreneur activities were considered by Sobotka undermining the government's authority.

© REUTERS / David W Cerny
Czech Crisis: Are Protests in Prague a Threat to Elections or a Prelude?
On May 5, Sobotka reversed his decision to resign but called on Zeman for Babis dismissal. The proposal was rejected by the president prompting about 20,000 people to rally against the decision in the Czech capital of Prague.

On May 10, Zeman held talks with the leaders of the three parties that make up the coalition, in an attempt to end the political standoff. According to media reports, the leaders expressed readiness to stay in power until the general election set for October 20-21.