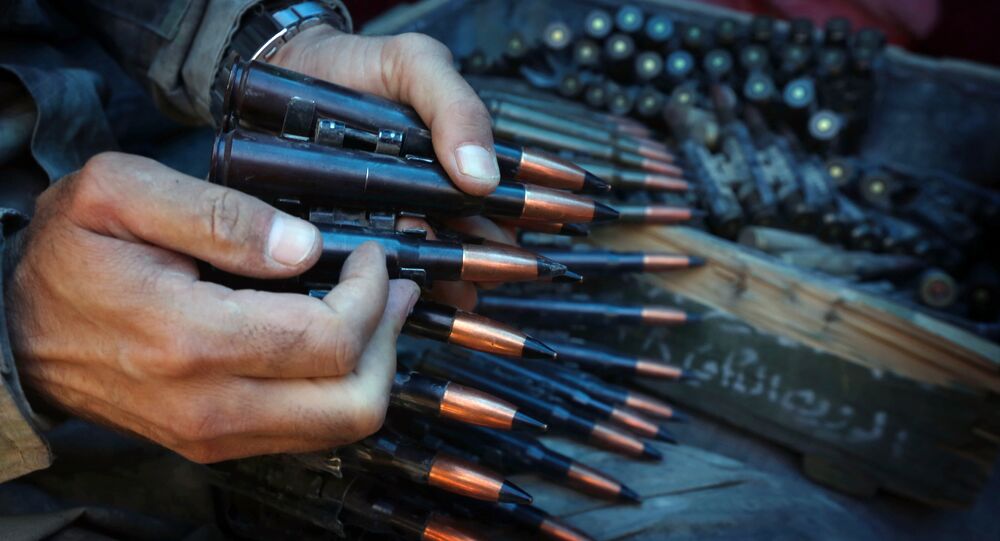 The recent Amnesty International report on the US Army failing to keep tabs on more than $1 billion worth of weapons has raised the issue of arms proliferation. Speaking to Radio Sputnik, Iain Overton of Action on Armed Violence stressed that a lack of coordinated control in US arms sales and procurement lies at the root of the problem.

© Sputnik / David B. Gleason
US Watchdog: Pentagon Cannot Verify if $2 Billion in Equipment Reached Iraq
The lack of control over the spread of weapons in war zones usually results in arms ending up in the hands of terrorists, warns Iain Overton, Executive Director of Action on Armed Violence, a British organization carrying out research and advocacy in order to reduce the incidence and impact of global armed violence.

The latest Amnesty International report sheds light on the 2016 US Department of Defense (DoD) audit which found several serious shortcomings in how the US military equipment intended for Iraq and Kuwait was logged and monitored.

The government audit revealed that the US Army "failed to keep tabs on more than $1 billion worth of arms and other military equipment in Iraq and Kuwait."

However, incomplete records mean those responsible for the arms were unable to ascertain their location or status.

"It makes for especially sobering reading given the long history of leakage of US arms to multiple armed groups committing atrocities in Iraq, including the armed group calling itself the Islamic State," Patrick Wilcken, Amnesty International's Arms Control and Human Rights Researcher, stressed in his statement on the organization's website.

© AFP 2021 / Noorullah Shirzada
Well-Calculated Negligence? Why Pentagon Continues to 'Lose' Arms in War Zones
The Pentagon officials refuted the allegations claiming that the watchdog's report was not "accurate."

Speaking to Radio Sputnik, Iain Overton compared his efforts to connect the dots while studying DoD's lengthy reports on its arms procurement with Alice's journey through Wonderland.

"I think one of the problems that really is at the heart is that there is a lack of coordinated control in US arms sales and procurement, and often that lack of control is partly driven by a kind of a controversial secrecy that prevails at many levels of US military. Some of that secrecy is understandable and some of that secrecy… leads to not only the situation that we have with Amnesty [International] reporting on this billion dollars loss of arms… but also leads to… a gross overspent of [US] tax money on weapons," Overton underscored.

The British expert called attention to the Action on Armed Violence's research that indicated that since September 11, 2001, the US Army has spent almost $24 billion on small arms and ammunition which were transferred to conflict zones in the Middle East.

"If you are buying a huge number of guns… and you are sending those [guns] to the Middle East to countries that don't have proper systems to ensure that those guns are not lost on the way or diverse into the hands of insurgents than you're kind of opening a Pandora's Box," Overton said.

He emphasized that there is evidence that small arms which were manufactured in the US had been found in the hands of Daesh (ISIS/ISIL). It is still unclear how these weapons found their way into the hands of terrorists. Likewise, a large number of AK-47 purchased by the Pentagon for the Iraqi Armed Forces also end up in the hands of extremists.

The lack of the control over guns is complicated by the fact that no one knows what happens to them "in the fog of war," the British expert noted.

In his recent op-ed, RIA Novosti contributor Alexander Khrolenko highlighted that the problem is, unfortunately, not limited to just small weapons and ammunition.

"Jihadists in Iraq and Syria have modern US-made anti-tank TOW systems and Stinger portable anti-aircraft missile systems (MANPADS)," Khrolenko stressed, recalling a series of episodes when the Pentagon was spotted losing track of its military equipment in Syria, Iraq and Afghanistan.

According to Overton, there should be more control over the arms proliferation from international organizations and the media.

"The entire challenge here is about not only identifying where arms go and that in itself is very difficult because it's not transparent in any way, shape or form but identifying where these arms have been used in human rights abuses," the British expert said, adding that an investigative journalist trying to find out the truth is usually faced with threats and violence.

In addition, "there is no raw money at the UN level to offer a kind of really hard scrutiny of that kind of international arms trade. It does really rely on journalists like yourselves or organizations like Action on Arms Violence to do that kind of investigation. And to be frank, journalism is underfunded and human rights investigations in the arms trade are even more underfunded," Overton admitted.