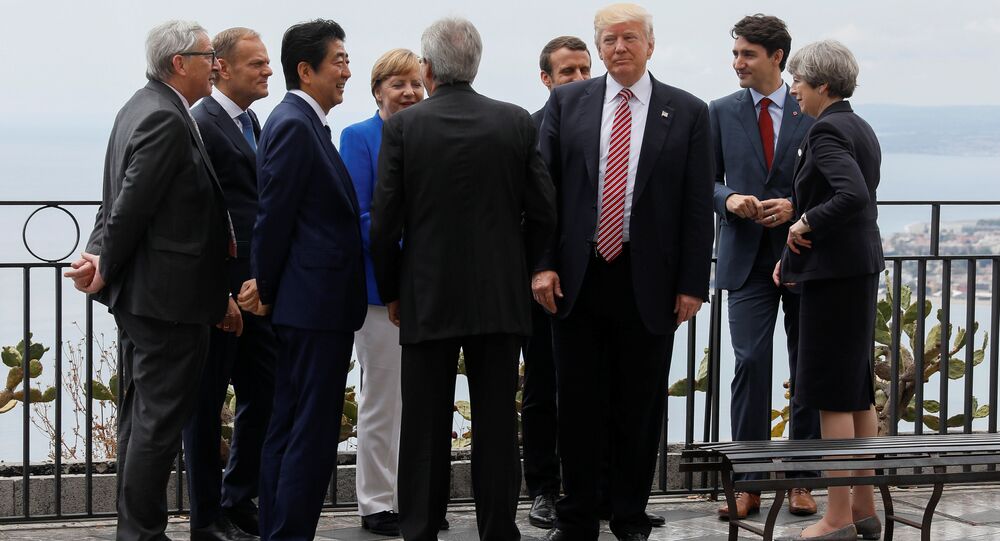 Unlike his predecessors, George W. Bush and Barack Obama, Donald Trump is not going to propagate America's global leadership, Russian scholar Vladimir Lepekhin wrote for RIA Novosti; according to the scholar, Trump is planning an overhaul of US foreign strategy to introduce a new world order.

Zbigniew Brzezinski's passing has marked the final transformation of the "grand" geopolitical chess match into a "card game," Vladimir Lepekhin, a member of Rossiya Segodnya's Zinoviev Club and General Director of the EurAsEC Institute, noted, adding that it's Donald Trump who is holding the deck now.

To illustrate his point, Lepekhin drew attention to the fact that US President Trump's first foreign trip went beyond the usual framework of his predecessors' foreign tours.

"George W. Bush's [first foreign] trip around Europe was a carefully prepared demonstration of America's global leadership and was aimed at providing guidance to the vassal countries for a new global policy (under the leadership of Washington), which the US began implementing after September 11, 2001," the Russian scholar wrote.

Similarly, during his first foreign tour former US President Barack Obama paid a visit to all major European countries delivering the same message of the US' world leadership.

"The route of Donald Trump during his first diplomatic and family trip was quite different: Saudi Arabia (meeting with the leaders of most Arab countries), Israel, the Vatican, Brussels (mini-summit of NATO) and Sicily (G7 summit)," Lepekhin emphasized.

Speaking to Radio Sputnik ahead of Trump's foreign tour, Russian political scientist Igor Shatrov suggested that the US president planned to visit "the centers of world religions."

"Most likely, [the Trump administration] is seeking positive externalities and PR — [the president is going] to pay tribute to the centers of world religions," Shatrov suggested, "I believe that in this case there are some 'marks' which Trump decided to make: the Christian and the Islamic world are parts of Donald Trump's sphere of interest."

For his part, Lepekhin believes that "Trump's logic does not fit into traditional geopolitical discourses": the American president is determined to do no less than to fully reconsider Washington's foreign strategy.

"One of the key problems of our period is that the international order with which we were familiar is disintegrating in some respects and that new elements from Asia and the developing world are entering it," as former American diplomat Henry Kissinger noted at the Davos Economic Forum in January 2017.

According to Lepekhin, the multipolar world differs much from both the bipolar "grand chessboard" and the global monopoly: "a multipolar world looks like a card table, with several players sitting at it; each of them joins different alliances, bluffs and carefully conceals his cards."

"In such a situation, the only one who has the advantage is the dealer," the scholar noted, adding that today the "dealer" holding the whole deck is Donald Trump.

So, why did Trump pay scant attention to his European partners?

The answer is obvious: Trump doesn't see any rationale for negotiating with uncooperative European leaders, the scholar wrote.

"Donald Trump's strategy [envisions collaboration] with the royal family of Saudi Arabia, the Islamic Ummah [community], the elites of Israel, Great Britain, China and Russia, and the Vatican," Lepekhin stressed, assuming that Israel will become Washington's major ally in the Middle East and therefore, the most influential player in the region.

© REUTERS / Francois Lenoir
It's Payback Time: How Trump Chided NATO 'Freeloaders'
But what about NATO? During his visit to the alliance's headquarters in Brussels Trump chided NATO member-states for not contributing enough to the military bloc. Does it mean that the US president wants to rebuild and strengthen the alliance?

According to the scholar, Trump sees the North Atlantic Treaty Organization as an alternative to US boots on the ground in the Middle Eastern and Central Asian war zones. However, if the alliance fails to efficiently fight against Daesh (ISIS/ISIL), al-Qaeda and Taliban, it is unlikely that Washington will continue to pour money into this "monstrous" organization.

"Trump is not going to demonstrate the American leadership to Europe and to the world. I believe he is not concerned about the standard foreign policy schemes and utilitarian interests of the State Department officials and oligarchic corporations; he is interested in fundamental issues related to the necessity to reformat the obsolete state of affairs and introduce a new model of the world order," Lepekhin concluded.

Trump Claims Money 'Beginning to Pour in' From NATO Allies