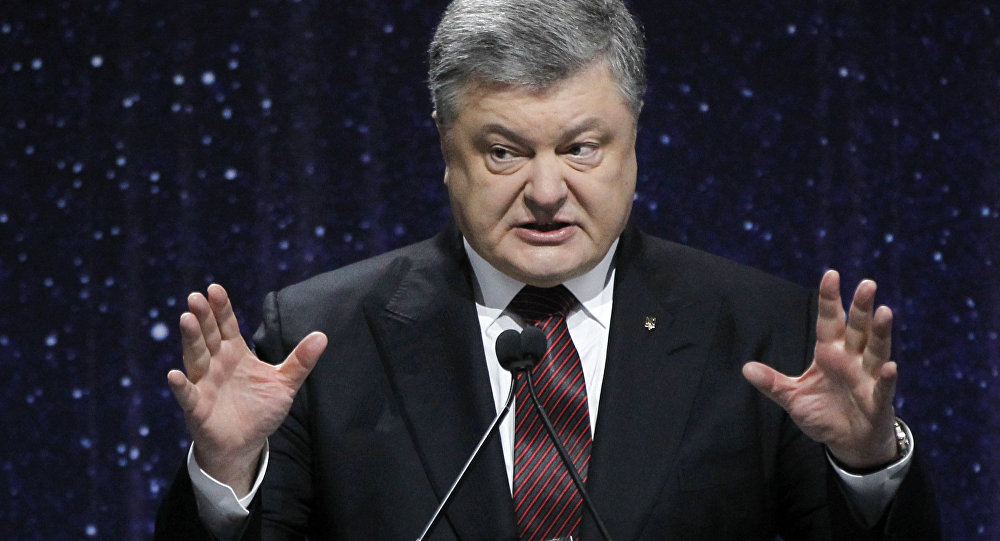 The 43rd G7 summit, which began Friday in the Italian town of Taormina, will wrap up on Saturday. Ukrainian President Petro Poroshenko, disappointed by the lack of consensus on Russia, has penned a whole article for Politico complaining about the "Kremlin's tentacles" and Kiev's brave attempts to cut them by banning Russian social networks.

Reuters reported Saturday that Group of Seven (G7) leaders have yet to agree on the language to be used to declare the group's position on Russia. According to a source cited by the news agency, officials haven't been able to agree on whether to include a pledge in the final communique to take additional action against Russia for Moscow's alleged meddling in the Ukrainian crisis.

Ahead of the summit, European Council President Donald Tusk complained that the meeting would "no doubt" be "the most challenging G7 summit in years," and urged leaders to maintain anti-Russian sanctions.

© REUTERS / Jonathan Ernst
G7 Leaders Vow to Cut Off Sources of Terrorist Financing - Statement
On Friday, White House economic adviser Gary Cohn tried to soothe Russophobes, saying that the US would not be changing its sanctions policy against Russia. "We are not lowering our sanctions on Russia. If anything, we would probably look to get tougher on Russia," Cohn said, speaking to reporters.

But such overtures didn't seem to be enough for Ukrainian President Petro Poroshenko, who penned an entire op-ed piece in Politico titled 'G7 must face down Russia or suffer disaster.'

The piece, which compares Russia to Nazi Germany and recalls Winston Churchill's unheeded warnings about the Nazis' aggressive plans ahead of WWII, says that "today, it is crucial not to repeat this mistake in Ukraine, which has become the primary target of Russia's revenge for the geopolitical collapse of the Soviet Union."

Poroshenko claimed that Russia is using 'hybrid warfare' against the West, and must be stopped. "The Kremlin's tentacles are reaching for the throats of key capitals of Europe and its transatlantic allies," he added.

© Sputnik / Natalia Seliverstova
Got the Picture: Kiev Says Complete Ban on Russian Social Networks Impossible
What are the real life manifestations of these 'tentacles'? According to Poroshenko, they include dastardly Russian social media sites Vkontakte and Odnoklasniki, which are administered in Russia (but are private companies, unaffiliated with the government – a detail the president deliberately left out).

Earlier this month, Poroshenko signed off on a decree introducing targeted sanctions against the Russian social networks, banning their use in Ukraine for a three year period. The measures, affecting some 25 million Ukrainians, have been slammed by journalists, rights activists, and even Kiev's erstwhile allies in the West. The ban has also become a source of considerable embarrassment for Poroshenko personally. Kiev has been forced to admit that an effective ban would cost a billion dollars and take two years to implement. Meanwhile, ordinary Ukrainians have already found ways around the restrictions.

In his Politico piece, rather than admit what even many pro-Kiev politicians say was a mistake, Poroshenko held firm, and even patted himself on the back for his own 'bravery'.

"Those who are brave enough to cut these tentacles only find themselves under renewed attack," the president complained. "This recently became obvious in Ukraine. When we suspended access to social networks administered by the Russian Federation, Moscow responded with a massive and coordinated cyberattack supported by information propaganda. Russia activated its information forces…to protect its social media agents such as VKontakte or Odnoklasniki."

© Sputnik /
Ukrainians See Red Over Poroshenko's Ban on Russian Social Media
Does this mean, by Poroshenko's logic, that Council of Europe Secretary Thorbjorn Jagland, who voiced his concern with the ban, is a Russian agent? Perhaps the German Foreign Ministry, which said that the ban raised "questions in the sphere of freedom of the press and media," was full of Kremlin puppets? Maybe Reporters Without Borders, which also broadly condemned the ban, is also just a bunch of secret Russian sleeper agents?

Getting to what was probably the real point of the whole op-ed, Poroshenko emphasized that Ukraine was now a warrior on the frontlines of the fight to defend the Western values of freedom and democracy. And warriors need weapons and ammunition. Defending peace and security, he said, requires "enhancing [the Ukrainian] army's defense capabilities, including boosting its store of modern defensive weapons." In other words, the president's op-ed could be summed up by the line 'Please Washington, don't cut our access to grants for US weapons." 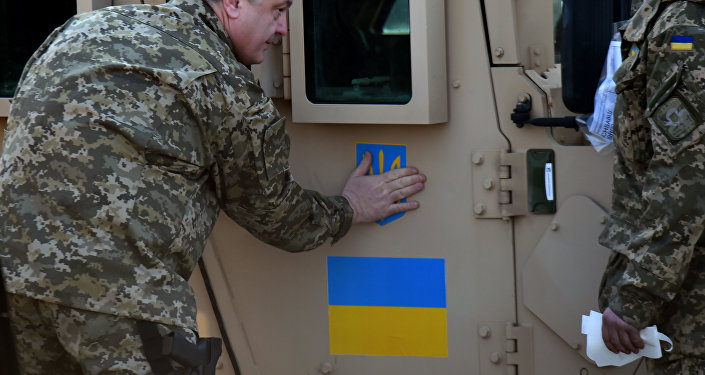 © AFP 2019 / SERGEI SUPINSKY
Oh the Humanity! Kiev Devastated by US Plans to Swap Weapons Grants for Loans
As for the G7, Poroshenko stressed that the group of countries must stay firm on anti-Russian sanctions. The West, he wrote, must resist the urge to restore normal relations with Moscow until the latter implements the Minsk agreements and gives up Crimea. Using the same sleight of hand tactics, the president left out the facts that a) Russia is not a party to the Minsk agreements, and b) Crimea broke off from Ukraine and rejoined Russia in accordance with international law, and after a referendum supported by over 90% of the peninsula's population in 2014.

Asked to comment on Poroshenko's op-ed, Russian senator Franz Klintsevich jested that the president's words about 'Kremlin tentacles' were a sign of just how far his paranoia seems to have advanced. "One cannot help but recall the words of US Secretary of Defense James Forrestal, who threw himself out the window of a hospital on May 22, 1949 while shouting the phrase 'the Russians are coming,' the senator said.

How G7's 2017 Agenda Differs From Past Summits