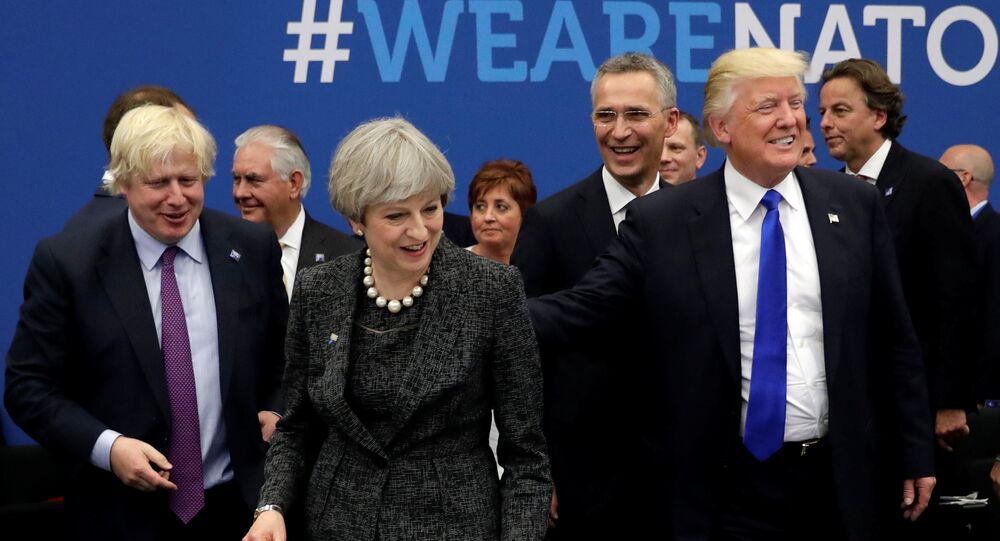 NATO Summit in Brussels: Trump Shows 'Who the Boss is in the Alliance'

The NATO summit has ended in the Belgian capital of Brussels. Members of the alliance agreed to increase their military spending to a goal of two percent of GDP.

© REUTERS / Francois Lenoir
It's Payback Time: How Trump Chided NATO 'Freeloaders'
However, the decision was made not without pressure from Washington. NATO Secretary General Jens Stoltenberg said that Trump’s message on defense spending was "blunt."

"NATO members must finally contribute their fair share and meet their financial obligations, for 23 of the 28 member nations are still not paying what they should be paying and what they’re supposed to be paying for their defense," Trump said, standing outside NATO’s new headquarters.

Moreover, Stoltenberg announced that the alliance will become a partner to a US-led coalition fighting against Daesh in Iraq and Syria, another decision made under Washington’s pressure.

"We agreed that NATO will become a full member of the global coalition in which all 28 allies already take part," Stoltenberg stated.

Earlier, media reported that European countries, including Germany and Berlin, are not going to bow to Washington’s pressure and are not optimistic about their involvement in fighting Daesh.

© REUTERS / Ali Hashisho
Stoltenberg: NATO to Become Part of US-Led Coalition Against Daesh
Stoltenberg must have been aware of possible differences with Berlin and Paris.

He continued: "This will send a strong political message of NATO’s commitment to the fight against terrorism. And improve coordination within the Coalition. But it does not mean that NATO will engage in combat operations."

"NATO supports efforts to find political solutions, peaceful solutions, negotiated solutions to the different conflicts we see around in the Middle East and the Arab world," he further added.

Russian political analyst Vladimir Bychkov suggested that in the current configuration of the alliance NATO will keep continue transmitting messages and orders sent by the US, the leader of the bloc.

"It’s nonsense that a military alliance wants to participate in making 'political solutions.' Talleyrand was right when he said that war is much too serious a thing to be left to military men," Bychkov wrote in an op-ed for Sputnik.

© Sputnik / Alexander Vilf
Russian Envoy: NATO Summit 'Has Not Changed Anything' in Bloc's Ties With Moscow
Furthermore, according to Trump’s statements at the summit, North Korea remains one of the most global problems. According to a White House statement, Trump, European Council President Donald Tusk and European Commission President Jean-Claude Juncker agreed to work together to isolate North Korea from the rest of the world.

"NATO’s relationship with Russia was another topic of the agenda of the Brussels summit.

NATO member nations also agreed to continue to enhance the alliance’s partnership with Ukraine, according to the secretary general. He noted that the alliance will support all efforts to enable the implementation of the Minsk agreements.

© Sputnik / Stringer
NATO to Keep Enhanced Presence in Eastern Europe Through 2022 - Polish President
As for Trump, the US president was laconic about Russia: "The NATO of the future must include a great focus on terrorism and immigration, as well as threats from Russia and on NATO's eastern and southern borders."

"Some say that Trump makes anti-Russian statements under the pressure of his opponents in Washington. To some extent, that’s true. But it was a mistake to believe that Trump would be Russia’s best friend. There was only a little hope of US-Russia normalization and constructive dialogue after his election," Bychkov noted.

Trump’s visit to summit was marked by an embarrassing incident. While taking a tour of NATO’s new headquarters, Trump fell behind the group, but pushed his way forward, shoving aside Montenegrin Prime Minister Dusko Markovic. The video of the incident went viral on social media.

"At the summit, Trump was quick to show to the other members of NATO who the boss is in the alliance," Bychkov ironically noted.

Markovic called the encounter an "inoffensive situation" and added that "it is natural for the president of the United States to be in the first row."

Commenting on the incident, Russian senator Alexei Pushkov said that by shoving Markovic, Trump put Montenegro in its real place in NATO.

"Of course, Trump was not very elegant when he shoved the Montenegrin prime minister at the NATO summit. But he dropped a hint of Montenegro’s real role in the alliance," Pushkov wrote on Twitter.