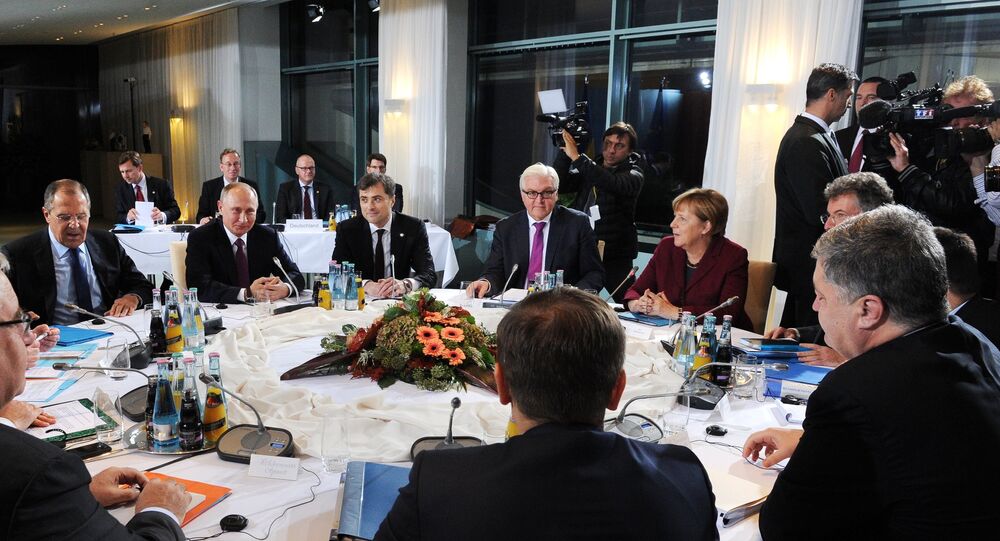 Russian President Vladimir Putin supports continuing the work in the Normandy format on Ukrainian settlement, while pessimism is caused by Ukraine's current position on the implementation of the Minsk agreements, Kremlin spokesman Dmitry Peskov said Friday.

MOSCOW (Sputnik) — Putin will meet with French President Emmanuel Macron on Monday, with France being one of the four members of the Normandy format.

"The president very consistently pursues a line on the need to resolve the internal Ukrainian problem, believes that the only tools available to us for settlement are the Minsk agreements. Which should be, of course, implemented," Peskov told reporters answering a question on whether the Ukrainian crisis would be on agenda of the meeting.

© Sputnik
Poroshenko, Macron Urge More 'Normandy Four' Efforts on Ukrainian Reconciliation
The spokesman stressed that Putin was in favor of continuing the work in the Normandy format.

"And largely, let's say, with pessimism, assesses the current dynamics, which the Ukrainian side demonstrates in terms of implementing the Minsk accords. This approach is well known, it is not new. And it is consistent," Peskov stressed.

In 2014, eastern Ukrainian regions of Donetsk and Lugansk declared their independence from Kiev. In response Kiev launched a military operation against the two self-proclaimed republics. In 2015, the sides reached an agreement in Minsk brokered by the leaders of the so-called Normandy Four group, comprising France, Germany, Russia and Ukraine.