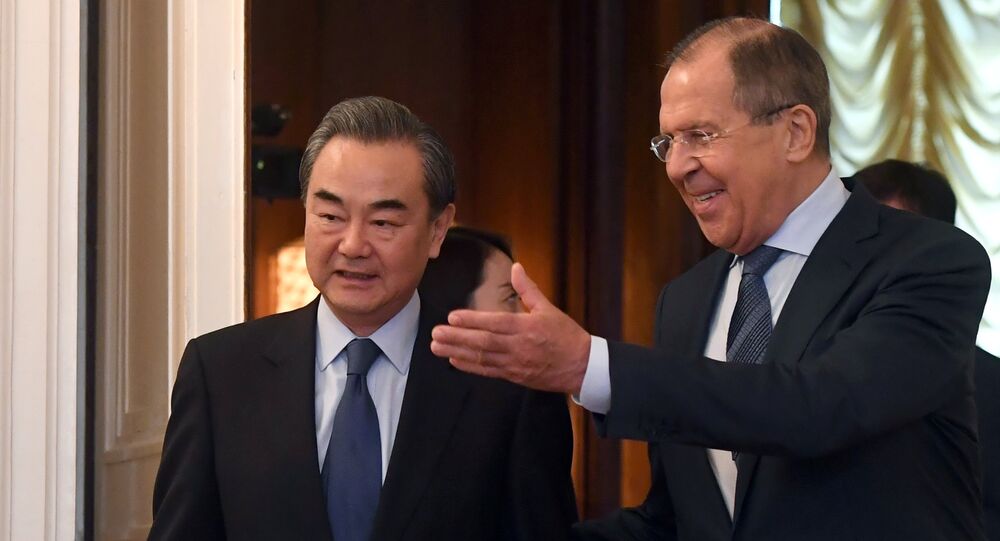 Everyone, Even US, Against 'Military Scenario' Toward N Korea - Lavrov

Russian-Chinese cooperation is a factor of stability in international relations, Lavrov said.

He said that Moscow and Beijing have the same understanding of the Syrian crisis, including the states' support of the peace talks between the Syrian government and opposition in Astana.

The Russian top diplomat said that Russia and China believe it is "counterproductive" to boost military presence on the Korean Peninsula under the prexent of the North Korean threat, including the deployment of the THAAD air defense system.

"We noted that attempts to use Pyongyang's actions as a pretext to boost military presence in the region, including the deployment of another part of the US' global anti-missile defense, are counterproductive."

"We are for adopting measures that, on the one hand, would hamper the further development of the North Korean nuclear missile programs, but at the same time would not lead to an increase in tensions in the region, would not block the possibility of a political and diplomatic settlement of the Korean Peninsula's nuclear problem," he said.

"We insist on ensuring peace and stability on the [Korean] peninsula, [oppose] any negative actions and statements that contribute to tension, oppose the deployment of the THAAD system in the Republic of Korea under the pretext of the DPRK nuclear problem," Wang told reporters.

© Sputnik / Vladimir Astapkovich
Why US' Sanctions Policy Against N Korea is Actually Aimed at Russia
He added that Russia and China call for measures which could impede the developement of the DPRK's nuclear program, but would not shut down opportunities of political settlement of the issue.

He added that Moscow and Beijing reaffirmed the need of all parties to abide by UN Security Council's resolutions on North Korea.

Russia and China call for the full denuclearization of the Korean Peninsula, Lavrov said.

© Sputnik / Iliya Pitalev
China Calls on US, Japan, South Korea to Reset Relations With DPRK
Use of military force would cause only negative consequences, Wang Yi said.

"Military actions can only escalate the crisis and bring serious consequences. No matter it was in the past, or in the future, it should not be an option for any country. China and Russia have reached consensus on this issue."

China takes into account the statements by the new South Korean leadership which is calling for a dialogue and sanctions as means to help resolve the issue, he said.

He called on Pyongyang to refrain from actions prohibited by UNSC resolutions.

"As for North Korea, our attitude is very clear. We hope and call on North Korea stop taking actions against UN resolutions and create necessary conditions for the restart of peace talks. The origin of the nuclear crisis on the Korean Peninsula is a security issue. All sides should focus on the security issue."

He said that now, everyone, even the US, understand that a "military scenario" in solving the North Korean problem is unacceptable as it could bring "catastrophic consequences."

"Everyone, even the United States, admits that attempts to use a "military scenarios" could be fatal. I must note the recent statement by US Secretary of Defense James Mattis, who directly said that the use of force to resolve the Korean Peninsula program would be fatal and catastrophic. Thus, a political solution is needed," Lavrov said, adding that more states are in favor of the contacts' restoration under certain conditions.

"Washington, Seoul and even Pyongyang started speaking about it, but each of them lays down conditions which presuppose that another one must make the first step."

Lavrov, in his turn, said that Russia and its partners in the Eurasian Economic Union are calling for Eurasian economic integration. He said that the union and the Chinese Silk Belt and Road economic project are cooperating in order to integrate Eurasia.

He emphasized that Moscow and Beijing are in favor of forming economic blocks which would not be closed for other participants hinting at the TTIP and TPP trade deals which have been promoted by the former US administration but rejected by US President Donald Trump.

Russia-China ties are at an "unprecedentedly high level," Lavrov emphasized.