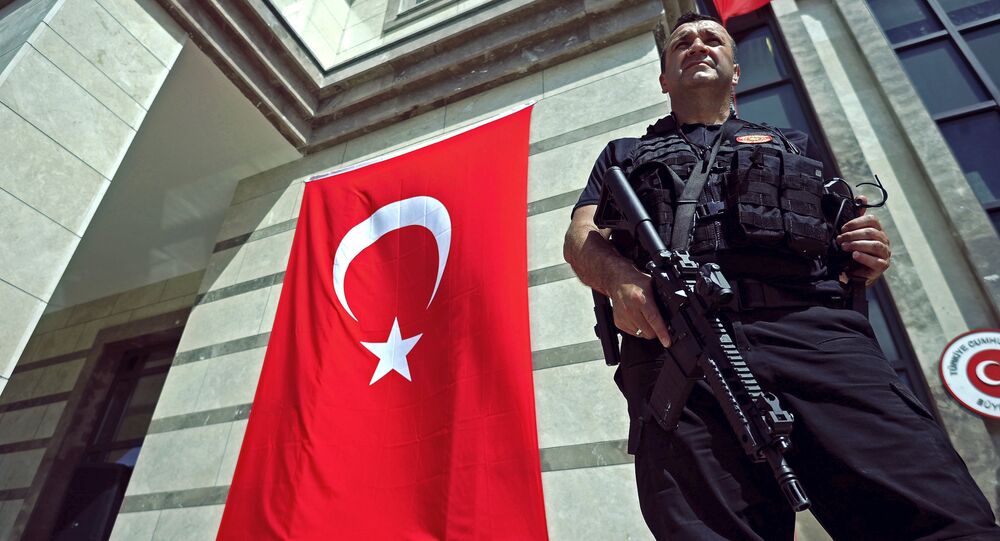 A Washington, DC, demonstrator who alleges she was assaulted by Turkish security personnel during Turkish President Recep Tayyip Erdogan’s May 16 visit to the US capital says that she is going to file a lawsuit against the Turkish government for injuries sustained during the melee.

Lucy Usayon is a Yazidi woman who was born in Armenia and moved to the United States when she was three years old. She joined the protests against Erdogan, where she claims to have been assaulted by Turkish security personnel.

"The protest was proceeding peacefully; however, being in the first line, I saw that another group joined the Erdogan supporters' group. Those people had completely different outfits – khaki shirts, sunglasses; big-muscled trained people with military boots," Usoyan said.

"I suddenly appeared on the ground, not even realizing how it happened. The next thing I remember is how somebody was repeatedly punching me in the head. I was thinking about one thing at that moment – why are they beating me if I'm not even defending myself?"

Usayon suffered head trauma and was knocked unconscious. A video taken of the fight shows Usayon, wearing red pants, lying unconscious on the ground at the 21-second mark. At the 25-second mark, a man in a suit and tie walks past her and kicks her in the leg before a DC police officer chases him away.

Her injuries will take six to eight weeks to recover from, but Usayon praised the few DC police officers who were present for their attempts to mitigate the brutality. "They were trying to protect us by a small group. The footage shows how an officer is trying to take me away from the attackers."

"Many law offices have reached to us. Big law offices that have sued different governments," Usayon told VOA's Armenia Service on Tuesday."We will also have a lobbying office to represent this case, because we believe no government — not only Turkey — no government has the right to come to this country and beat up US citizens and get away with it."

© REUTERS / Kevin Lamarque
Your Fault, Not Ours: Turkey, US Trade Blame Over Brawl at Washington Embassy (VIDEO)

As to why she participated in the protest, Usoyan said that she was "concerned with Erdogan's visit, thinking that a man who doesn't respect democracy isn't entitled to being hosted in the White House, which is a symbol of democracy."

She was also protesting the Turkish government's denial of the Armenian Genocide perpetrated by the Ottoman Empire in 1915. Historians and international bodies almost universally recognize the actions of the Ottomans as a genocide that killed 1.5 million Armenians, but the governments of Turkey and Azerbaijan deny it. "We – all Armenians – must stand up for rights and justice and demand the recognition of the Armenian Genocide," said Usoyan.

Usayon also criticized the Trump administration for its response to the incident – or more specifically, the lack of a response. US Secretary of State Rex Tillerson condemned the attack but said that he was going to hold off on taking any action until an investigation was completed. Congressional representatives have pushed for the Turkish ambassador to be ejected or for the security officers involved in the brawl to be arrested and tried in a US court, but neither of those seem likely to happen.

"I was talking to my family and relatives last night, and everyone takes this as a [sign of the] weakness of our current government," said Usoyan. "I do believe President Trump should shed a spotlight to this case and address this issue so it doesn't spotlight him as weak towards Turkey."

On Monday, US Ambassador to Turkey John Bass was summoned to Ankara to answer for the "aggressive and unprofessional actions" of "US security personnel," referring to DC police. One officer was injured in the brawl. On Thursday, the Turkish Foreign Ministry laid the blame for the violence at the feet of the US once more, as they claimed American authorities refused to take "necessary security measures."

Erdogan and Trump are expected to meet again at some point during the ongoing NATO summit in Brussels.