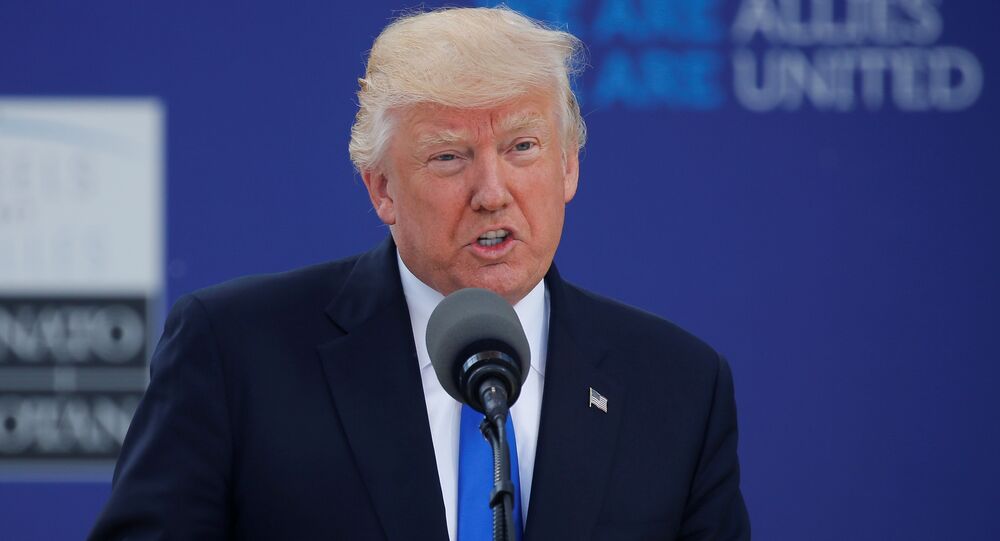 US President Donald Trump attends his first NATO summit in Brussels, on May 25, to call on the military alliance to further strengthen its efforts in the fight against terrorism. In an interview with Sputnik Italy, Italian military expert Mirko Molteni, commented on the meeting and gave his forecast about Russia-NATO relations.

© REUTERS / Peter Dejong
Trump Makes First NATO Meeting as Alliance Steps Up Fight Against Daesh
"During his first international trip as US President, Trump was able to assess the global political situation and consider steps he should take in the future. NATO still plans to deploy its troops in Lithuania, Estonia and Poland, but it remains for us to see whether Trump will be able to implement a new strategy aimed at the universal struggle against terrorism, a real enemy," the expert noted.

In his turn, a political analyst and expert on international conflicts from the Geneva Center for Security Policy (GCSP), Alexandre Vautravers, said that Trump seems to have recognized the existence of certain problems and has started taking responsibility.

"I think that Trump realized many problems and now takes responsibility. In addition, there are people — military advisers, ministers, other professionals — who are preparing a political platform for the American president. President Trump and his government are seeking to strengthen internal relations of the Atlantic Union," Vautravers noted.

During the summit, US President Donald Trump said that terrorism poses a common threat to the world and must be stopped in its tracks. NATO Secretary General Jens Stoltenberg, in turn, officially announced that the military alliance will join the anti-Daesh coalition and intensify the fight against terrorism.

"NATO understands that we have one common enemy — terrorism. It also seems that the placement of NATO troops close to the Russian border is rather symbolic. There is a possibility that eventually Trump will resolve this situation," Molteni noted.

However, during the NATO summit in Brussels, US President Donald Trump said that the NATO alliance must focus on the threats posed to Europe by terrorism, unchecked immigration and Russia.

"The NATO of the future must include a great focus on terrorism and immigration, as well as threats from Russia and on NATO's eastern and southern borders," Trump stated.

© REUTERS / Jonathan Ernst
What European Leaders Expect From Trump at NATO Summit
During his election campaign, Trump called for a thaw in US-Russia relations in order to cooperate in the fight against terrorism, saying that he wants to "get along with Russia," however, after he became the US president, Washington's ties with Moscow have remained strained.

NATO has set a sustainable course for the alliance's expansion by engaging Eastern European states since 2014, explaining the enlargement as a response to Russia's alleged meddling in the Ukrainian conflict. Moscow has repeatedly refuted such allegations, and regards NATO's encroachments as provocative.