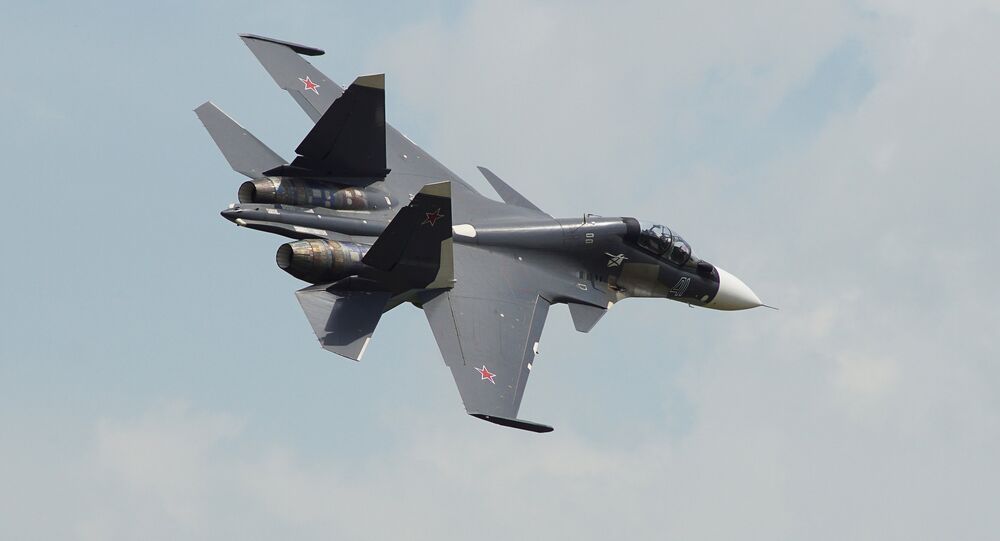 What a Pentagon official described as an "unprofessional intercept" of a US KC-10 aerial refueling tanker aircraft over Syria conducted by a Russian fighter jet was nothing but "escorting," Russian aviation expert Vladimir Popov told Radio Sputnik.

On Wednesday Lt. Gen. Jeffrey L. Harrigian, the commander of the US Air Forces Central Command (CENTCOM) told reporters about a Russian jet conducting an "unprofessional" intercept of a US aircraft over Syria on May 9; however, according to Russian aviation expert Vladimir Popov, what the US military describe as an "intercept" was merely escorting.

"I will share with you… one incident where there was an intercept they [Russia] ran that I would categorize as unprofessional," Harrigian said during a Department of Defense briefing via teleconference. "And we called them on it, and expressed our concern. And they came back, quite frankly, and apologized for that particular intercept."

© REUTERS / Hamad I Mohammed
Syrian Airspace: Why Flight Safety Memo Suspension Became a Painful Experience for US
When asked by journalists what had exactly happened, the military official responded: "Let's see. It was — know there was a fighter aircraft involved with one of our tankers. If you recall, I think when I saw Dan and Courtney out here back in the fall, we had had an incident at night with our AWACS. This particular one had to do with — I can't remember if it was a SU-35 or a SU-30 involved with one of our KC-10s."

At the same time, however, Harrigian asserted that "[the Russians] have been responsive and been receptive to what we've wanted them to do in a manner that has allowed us to continue to prosecute our fight."

Following the US Tomahawk massive attack on April 7 against the Syrian Shayrat airfield, which was used by the Syrian Arab Army (SAA) to launch airstrikes against Daesh (ISIL/ISIS) and al-Nusra Front in the region, the Russo-American collaboration over flight safety in Syria had been suspended.

Although later Moscow restored the memorandum of understanding on flight safety over Syria, this case appeared to be a painful experience for Washington, as Nikita Danyuk, deputy director of the Center for Strategic Research and Prognosis at RUDN University, told Radio Sputnik back in April.

Commenting on Harrigian's statement, Russian aviation expert Popov highlighted that, at best, the term "intercept" was a misnomer.

"The 'intercept' means that the aircraft must have been either forced to land, or squeezed out the zone of action, or shot down. This is the interception. All the rest is just escorting. In addition, one needs to take into account where exactly the plane was operating. The [US-led] coalition works in the east of Syria, and everything that is to the west is our area of responsibility. Most likely, we identified this plane, [since] we had to know what it was doing [in this zone]," Popov told Radio Sputnik.

© AFP 2021 / OLIVIER MORIN
NATO Can Help in Anti-Terror Fight in Syria if it's True Alliance's Goal - Moscow
While the Pentagon signals that "the pure quantity of phone calls" between the American and Russian military in Syria has recently increased, there is still no coordination and mutual control between the powers, the aviation expert underscored.

According to Popov, the lack of coordination triggers problems both in the Syrian airspace and on the ground.

"We [Russia] have long offered to dispatch our representative to the [command] center of the coalition forces. But they [the US] did not give their consent. All we have are telephone lines. And there was an incident when we tried to find information about a group of aircraft [of the coalition], but, ostensibly, the Pentagon colonel [in charge] was absent at the moment. Then there were explanations, but they had already launched a strike. That's what is at stake — there is no mandatory [mutual] control," Popov underscored.

Syria Returning Military Aircraft, Personnel to Airbase Attacked by US