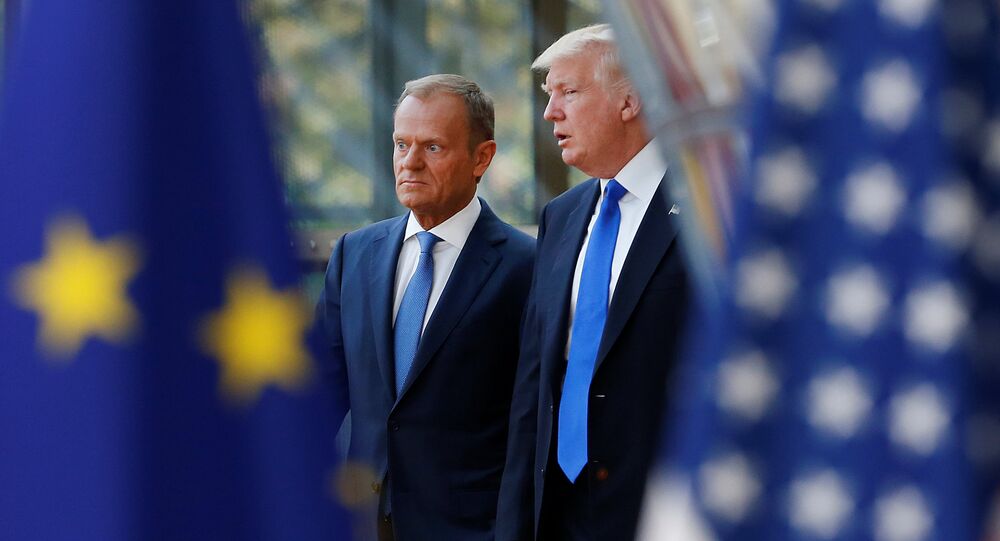 European Council chief Donald Tusk said Thursday that he and US President Donald Trump did not manage to overcome some of their differences on some issues such as climate and trade at their meeting, adding he was not sure that their opinions on Russia coincided.

MOSCOW (Sputnik) – However, Tusk said that he and Trump agreed on many areas, especially on counterterrorism.

"My feeling is that we agreed on many areas. First and foremost, on counterterrorism, and I am sure that I do not have to explain why. But some issues remain open, like climate and trade. And I am not 100 per cent sure that we can say today —we meaning Mr. President Trump and myself- that we have a common opinion about Russia, although when it comes to the conflict in Ukraine, it seems that we were on the same line," Tusk said in a statement.

The EU official added that he and Trump had also focused on "foreign policy, security, climate and trade relations."

© REUTERS / Jonathan Ernst
What European Leaders Expect From Trump at NATO Summit
The statement comes as Trump arrived in Brussels to attend the NATO summit which will be the first since the new administration came into the White House.

Meanwhile, a EU source told reporters speaking on conditions of anonymity that the US and the EU reached an agreement on Thursday to create a working group aimed at settlement of bilateral issues related to the sphere of trade.

"In the sphere of trade they have agreed about their interest in common work with the third countries on the issues of unfair commercial practices. The support to creation of a working group on bilateral relations, including on complicated issues and the ones related to the global trade, has been voiced," the source said.

Earlier in the day, US President Donald Trump held a meeting in Brussels with high-ranking EU officials, including European Council President Donald Tusk, European Commission President Jean-Claude Juncker, European Parliament President Antonio Tajani and EU foreign policy chief Federica Mogherini. Following the meeting, the US leader said that the sides failed to come to a consensus in the trade-related issues.