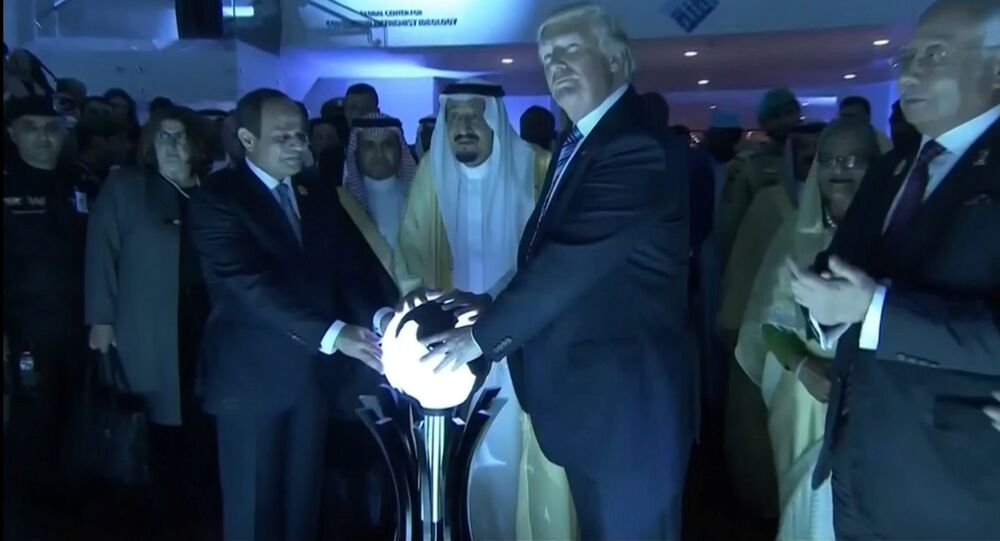 WASHINGTON (Sputnik) — US President Donald Trump proved on his visit to Saudi Arabia that he was prepared to turn a blind eye to Riyadh’s support for Islamists in return for lucrative oil deals, analysts told Sputnik.

"The arms deal signals that another US administration is willing to ignore the Saudis’ major role in Sunni terrorism… in return for allowing the US to buy Saudi oil in US dollars," California State University Professor Emeritus of Political Science Beau Grosscup said.

© REUTERS / Jonathan Ernst
Trump's Support of Saudi Arabia Predicted to 'Backfire' on US
The Saudis had given strong support and protection to Daesh terrorist group which killed nearly 3,000 people in its destruction of the World Trade Center and attack on the Pentagon on September 11, 2001, Grosscup recalled.

"After Trump’s visit, Saudi Arabia would continue its large investment in the US economy and remain a major purchaser of US arms purportedly to defend itself against 'Iranian aggression,'" Grosscup pointed out.

"The US president’s speech and comments in Riyadh also signaled "that the Trump administration remains committed to supporting the Saudi’s effort defeat Yemen’s Iran-backed Shiite revolution by terror bombing Yemen civilians into starvation," he stated.

In Riyadh, Trump echoed the policy of former President George W. Bush that "you are either with us or the terrorists," Grosscup observed.

"Like presidents Bush and [President Barack] Obama before him, Trump drew the world of terrorism in simplistic, bi-polar, and as he said, ‘battle between good and evil,’ imagery. The problem is, while politically useful at home, this imagery has no relationship to reality," Grosscup said.

Professor of neuroscience and political commentator John Walsh told Sputnik that Trump’s demonization of Iran during his Riyadh visit stood out as the main stumbling block preventing his goal of restoring good relations with Russia,

"Iran is the stumbling block to President Trump's genuine desire to get along with Russia, obviously genuine since he is willing to pay such a high political price to do so. And New Detente with Russia is the most important thing Trump has promised," he noted.

What do you think about Donald Trump's plan to create a united front with the US' Middle Eastern allies against Iran?
Voted: 30
All polls
However, Trump cannot expect Russia to turn on Iran, Walsh observed.

"So if that is his demand, then that is a deal breaker. [Secretary of State Rex] Tillerson, it seems, would oppose such a deal breaker," he said.

However, Walsh recalled that in Trump’s speech to the American Israel Public Affairs Committee (AIPAC) during the 2016 election campaign he promised not to nullify the P5+1 nuclear agreement with Iran but to enforce it.