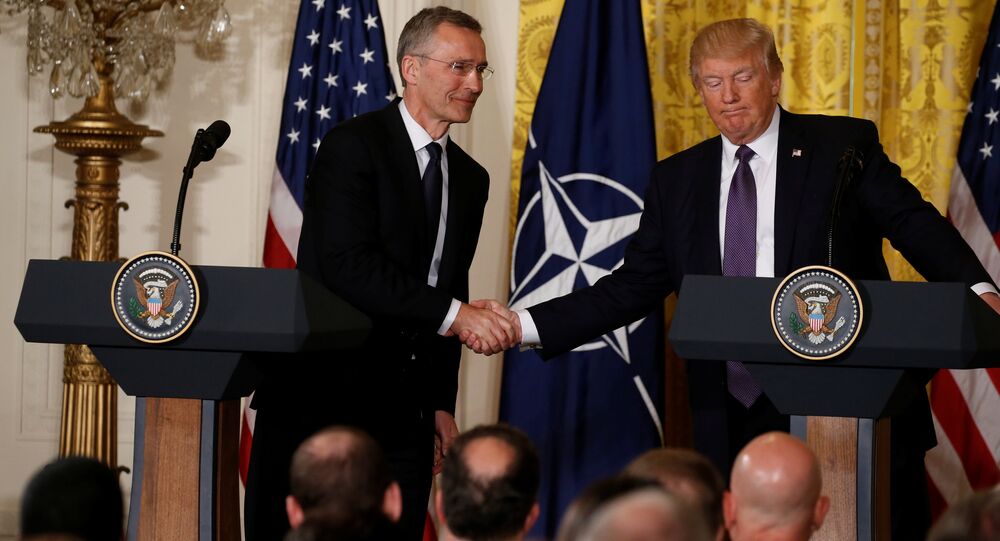 'Obsolete' No More? Trump's Policy 'Brings NATO Back in the Game'

United States President Donald Trump will take part in a summit of NATO national leaders scheduled for May 24-25 in Brussels. The main issues on the agenda are defense spending, alliance’s strategy in Eastern Europe and the fight against terrorism.

© REUTERS / Jonathan Ernst
Trump: NATO No Longer Obsolete, Needs to Play Bigger Role Fighting Daesh
However, the financial issue is likely to dominate the talks. Earlier, at a NATO defense ministers meeting, US Defense Secretary James Mattis warned that Washington would limit its obligations in the alliance if its members refused to increase their military spending to two percent of GDP.

Moreover, the participants of the upcoming summit will discuss joining an international anti-Daesh coalition. In a recent interview with Bild, NATO Secretary General Jens Stoltenberg said that the alliance would not participate in combat actions in Syria and Iraq.

"However, Trump may not like such a scenario since Washington has set a course to re-establish American leadership in the Middle East," political commentator Alexander Khrolenko wrote in an op-ed for RIA Novosti.

NATO’s strategy towards Russia will also be discussed, including increasing measures to boost the alliance’s presence from the Barents Sea to the Black Sea.

© AFP 2021 / PATRICK HERTZOG
Trump and NATO: 'Obsolete' Organization Could Yield to 'European Defense System'
Trump once sparked concerns among his European partners, calling NATO an "obsolete organization." However, this had no effect on the alliance’s relations with Russia. Apparently, at the upcoming summit, NATO leaders will decide on Montenegro’s admission to the alliance.

© AP Photo / Alik Keplicz
Russian Envoy to NATO Says Boosting Security Against Moscow 'Counter-Productive'
At the same time, Ukraine and Georgia are unlikely to become even a step closer to the alliance without affecting Russia’s interests. According to Khrolenko, taking into account the current level of tensions between Russia and the West, Brussels is unlikely to go that far.

In a recent interview with the Russian newspaper Rossiyskaya Gazeta, Russia’s envoy to NATO Alexander Grushko noted: "The leaders of NATO have deployed their troops and military equipment to areas where they are not allowed to stay, according to the 1997 NATO-Russia Founding Act."

According to Grushko, there is every right to consider this an attempt to mount military and political pressure over Moscow.

"Despite the fact that Stoltenberg said that Russia should get along with NATO expansion, Moscow always responds to force with force. Brussels should realize that its saber-rattling near Russia’s border will have a negative effect on security. Russia is not seeking confrontation with NATO.

De-escalation would be more productive, but it seems that no one takes it seriously. As a rule, the West tends to resolve the geopolitical problems it creates," the author pointed out.

Alliance in the Middle East

© REUTERS / Jonathan Ernst
Trump, Saudis Plan to Kit Out 'Arab NATO' With Massive New Arms Deal
Recently, during the Arab regional summit in the Saudi capital of Riyadh, Trump called on Muslim countries to unite against terrorism. According to Khrolenko, this marks the launch of a new conception, an analogue of NATO in the Middle East.

The new alliance is expected to be headed by Saudi Arabia, and its core will include the United Arab Emirates (UAE), Egypt and Jordan. There are also dozens of potential members of the new organization.

Khrolenko suggested that the new alliance would soon present its charter and a joint military force.

"Washington will use this project as a counterbalance to the current de-facto alliance between Russia, Iran and Syria in the Middle East. At the same time, such an organization will be a kind of response to China’s growing influence. If the project works out it is possible that a similar organization will be established by Washington in Southeast Asia," he wrote.

© AFP 2021 / FAYEZ NURELDINE
This is How Riyadh's Bellicose Threats Against Iran Can Backfire on Saudi Arabia
Currently, Washington’s official stance on the Middle East is clear. The US sees Iran as the main sponsor of terrorism in the region while Daesh and other terrorist threats are seen as products of Tehran’s foreign policy.

"From Lebanon to Iraq and Yemen, Iran funds, arms and trains terrorists, militias and other extremist groups that spread destruction and chaos across the region. […] For decades Iran has fueled the fires of sectarian conflict and terror," Trump said at the summit in Riyadh.

"What we’re witnessing now is another attempt by the US to shift responsibility. Similar accusation were made long before the US and NATO military operations in Iraq and Libya. The basis of Washington’s world order remains the same. Trump has given up his plan to normalize ties with Russia. Instead, Washington’s geopolitical momentum is bringing NATO back in the game," Khrolenko concluded.

Trump to Reaffirm Commitment to NATO, Need for Allies to Pay Fair Share

Trump, French President-Elect Macron to Meet on May 25 at NATO Summit