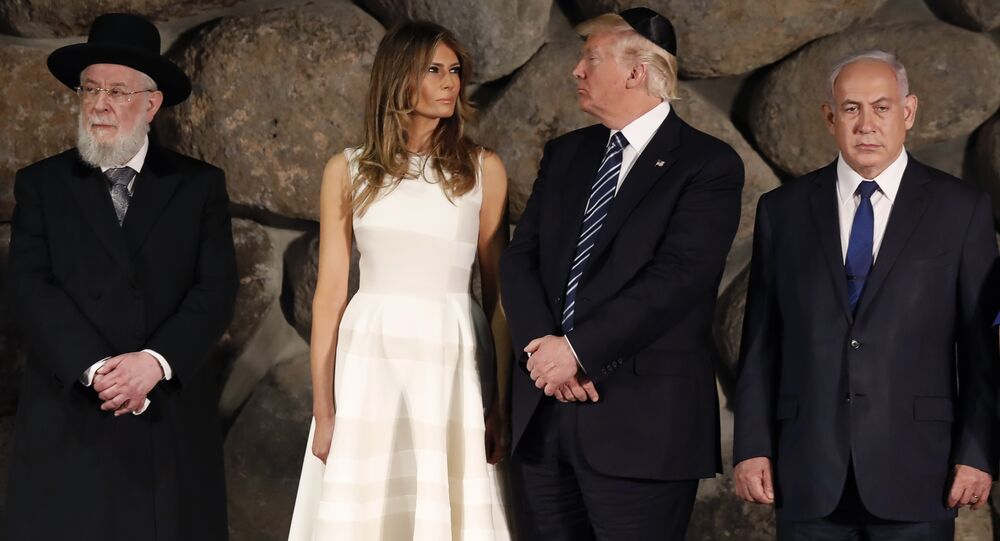 In spite of a campaign promise to move the US embassy in Israel from Tel Aviv to a location in the hotly contested city of Jerusalem, US President Donald Trump has departed from his visit to the country with no mention of the shift.

Prior to Trump's departure from Tel Aviv on Tuesday he gave a farewell speech that included plenty of political boilerplate but no specifics, particularly with regard to the highly charged political promise of moving the US embassy in Israel from Tel Aviv, the nation's financial, tech and business hub, to Jerusalem.

"What a heritage, what heritage," Trump declared in his speech. "The ties of the Jewish people to this holy land are ancient and eternal. They date back thousands of years," he said, as reported by the Jerusalem Post.

"I make this promise to you," added the US president, "My administration will always stand with Israel." In a pause following this remark, Israeli Prime Minister Benjamin Netanyahu spontaneously grabbed Trump's hand and shook it vigorously.

Trump's remarks took a darker turn while speaking of the continued violence within the country, stating that Israel is a nation in which "school children […] must run to the bomb shelters with fear but with speed. ISIS targets Jewish neighborhoods, synagogues… and Iran's leaders routinely call for Israel's destruction," before referring to himself in the third person by asserting: "Not with Donald J Trump."

After naming himself, the US president paused for breath while the handpicked audience erupted into an applause, which rapidly swelled to a standing ovation, while the Israeli prime minister grinned and pumped his fist in the air.

"I like you, too," Trump responded, cited by Jpost.com.

But no mention was made by the US president of the embassy move, and many Israeli officials came away disappointed, as Trump headed toward Europe on Air Force One to continue his nine-day foreign junket, his first trip outside the US since becoming president.

Netanyahu is known to be hoping to gain support in the US for the embassy move, as it would be interpreted as validating Israel's 1967 annexation of the eastern section of Jerusalem, and a slap in the face to Palestine's original claims on the region.