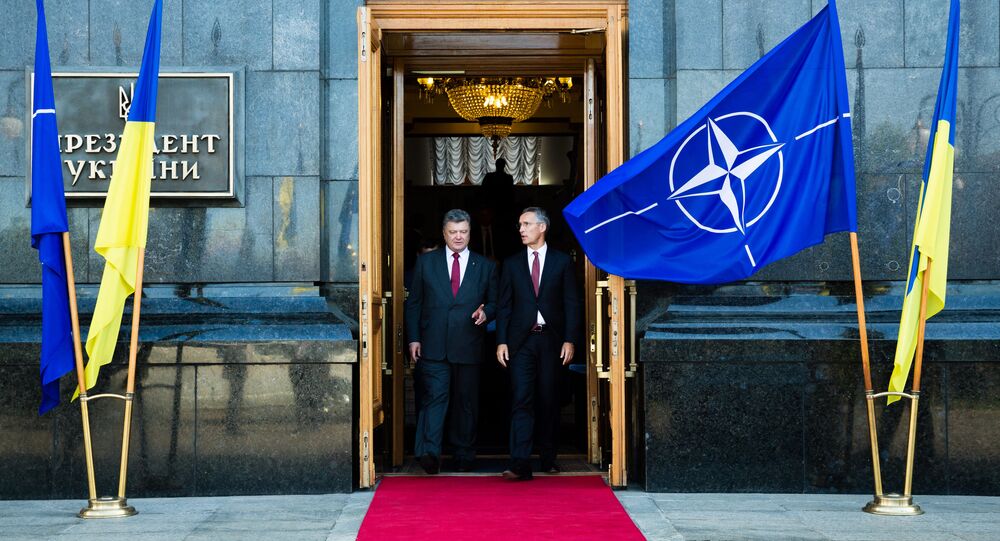 Exactly 15 years ago Ukraine announced its official decision to join the North Atlantic Treaty Organization (NATO). However, nothing has changed since then. RIA Novosti contributor Alexander Khrolenko and political scientist Denis Denisov shed light on what went wrong for Ukraine.

While Kiev pledged its readiness to join the North Atlantic Treaty Organization (NATO) exactly 15 years ago, it is rather doubtful that Ukraine will eventually become a member of the alliance, RIA Novosti contributor Alexander Khrolenko noted.

"Immediately after the collapse of the Soviet Union Ukraine joined the North Atlantic Cooperation Council (NACC) (renamed the Euro-Atlantic Partnership Council [EAPC] in 1997), and was the first in the CIS to join NATO's Partnership for Peace (PfP) program. Obviously, this 'fraternization' was not an impromptu action: a unified project of "Anti-Russia" had long been developed in the West," Khrolenko wrote.

© AP Photo / Northrop Grumman
No More Money for Nothing: Trump’s Budget Proposal May Frustrate Ukraine, Others
Thus, it was hardly surprising that on May 23, 2002, Kiev officially announced its decision to join NATO during a meeting of the National Security and Defense Council, chaired by then-Ukrainian President Leonid Kuchma.

However, although 15 years have already passed things haven't budged an inch for Kiev.

To add to the controversy NATO member-states "do not see the grounds for Ukraine's accession," Khrolenko highlighted.

"Brussels supports Kiev in conducting reforms and achieving compatibility standards just in words; however, given the current pace of the retraining of the Ukrainian army, the alliance instructors will need more than 60 years to fully reform the Ukrainian Armed Forces," he wrote.

What is the major obstacle in the way of Ukraine's NATO membership?

It appears that NATO war planners are seeking to use Ukraine "remotely" by not providing it with full membership in the alliance, Khrolenko noted.

According to the journalist, after the collapse of the USSR, American and European policymakers were not interested in the rise of prosperous and self-sufficient states in the post-Soviet space.

However, "the transformation of the Soviet Union into a group of pseudo-independent states which are hostile to each other, and the creation of a vast zone of enmity and self-destruction, in which everyone is fighting against all (without grabbing natural resources), was the West's failed project and a historical mistake," Khrolenko said.

© Sputnik / Stringer
Blast Hits Office of Ukraine's Right Wing Party in Kiev, No Casualties Resulted
Nevertheless, the Ukrainian leadership had contributed a lot to the destructive processes in the post-Soviet space and turned a blind eye to the emergence of ultranationalist and neo-fascist groups in the country.

The journalist recalled that Ukrainian army troops and at least 200 members of the neo-Nazi UNA-UNSO organization took part in Georgia's attack on South Ossetia back in August 2008.

"Kiev still hopes for the rapprochement with NATO following the implementation of the association agreement. Ukraine is planning to reach full compatibility of its armed forces with those of the alliance by 2020. At the same time, the Ukrainian leadership regards the country as the de facto eastern flank of NATO," the journalist wrote.

© AP Photo
Ukraine May Lose Right to Take Part in WHO Director-General Election Due to Debt
According to Khrolenko, NATO is unlikely to ever open the door to Ukraine: the crux of the matter is that Russia and its national security interests backed by a nuclear arsenal remain a red line for the Western strategists.

Furthermore, the alliance will never incorporate a country with territorial disputes and a simmering military conflict on its territory, the journalist remarked referring to Kiev's ambitions to return Crimea which reunified with Russia in 2014 in a result of a referendum and the Ukrainian leadership's war against the Donbass breakaway region.

Denisov drew attention to the fact that Ukraine does not meet a number of crucial requirements for NATO membership, including the military spending issue and the structure of the armed forces.

In addition "there is a civil conflict in the territory of Ukraine. A belligerent country cannot acquire membership," Denisov told Radio Sputnik.

Denisov believes, however, that if the US and NATO really wanted to incorporate Ukraine in the alliance they would turn a blind eye to the Donbass turmoil.

"But everyone understands that Ukraine's official invitation to NATO and its membership [in the alliance] would become a serious step toward the escalation of tensions between the West and the Russian Federation. Such a decision would actually change the strategic balance of power in the region, which, of course, would spell trouble to our Western partners," Denisov said.