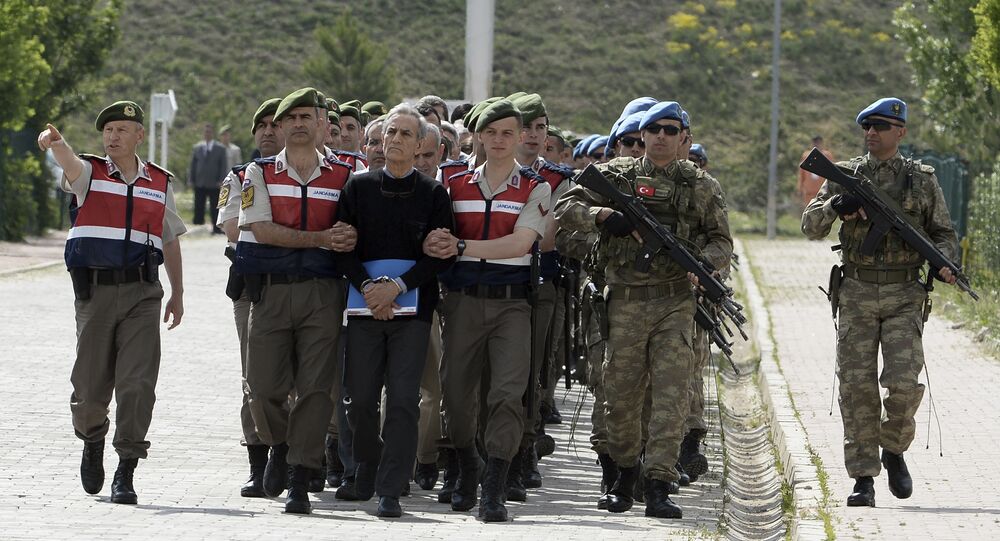 Trial Begins for 200+ Ringleaders of Turkey Coup, Who Face Life in Prison

More than 200 Turkish military officials, including 27 generals, have been put on trial for their part in the July 2016 coup attempt. They, along with 12 others not in the military, face life in prison -- and possibly the gallows -- if found guilty of the charges.

The suspects were paraded through the streets of Ankara as pro-government demonstrators barraged them with jeers. Some of them threw nooses at the accused as a symbolic call for the reinstatement of the death penalty.

Capital punishment was outlawed in Turkey in 2004 as part of a push to join the European Union, but Erdogan claimed that he would renew the death penalty after the coup if parliament or a public referendum wills it.

"We want the death penalty, we don't want them to be fed and housed here. We want these traitors to be buried without any flag," protester Cengiz Ozturk told Al Jazeera.

Öztürk led the procession of prisoners, who have been accused of "violating the constitution," "using coercion and violence in an attempt to overthrow" the Turkish government, "martyring 250 citizens" and "attempting to kill 2,735 citizens," according to Turkish newspaper Hurriyet.

Anadolu, the Turkish government's news agency, reported that approximately 1,500 personnel would be providing security during the trial, which is expected to last through June. Armored vehicles, rooftop snipers, and overhead drones were all part of the procession.

Twelve of the 221 being charged will be tried in absentia, most notably Fethullah Gulen, preacher and Erdogan's former right-hand-man who became one of his most bitter enemies following their 2013 falling-out. Gulen, who lives in exile in the United States, has been accused of masterminding the uprising. He denies the charges.

More than 47,000 people have been arrested in Turkey for having suspected ties to either Gulen or the "Peace at Home Council," which attempted to overthrow Erdogan's government in July 2016.

"Fundamental rights and freedoms, as well as the secular democratic legal structure based on the separation of powers, have been abolished by the heedless, misguided and even treacherous president and government officials," the Council said in a statement during the failed coup.

Another 100,000 individuals have lost their jobs as a result of their alleged involvement in the coup, more than half of them in law enforcement or education.