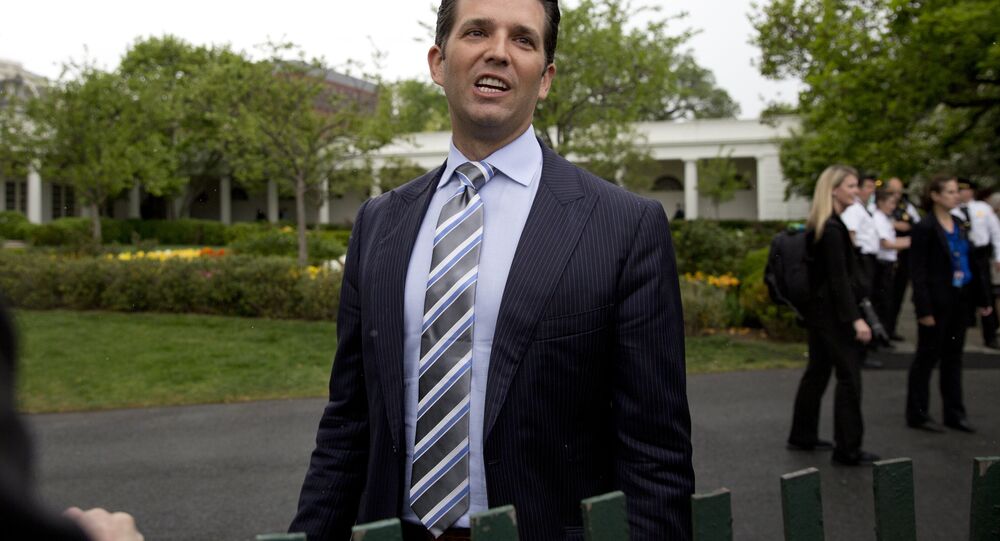 Facing increased pressure to reveal potential business conflicts, it instead appears that US President Donald Trump and his family are expanding their global business network.

Though the president said his Trump Organization would make no new business deals as long as he was in office, a Trump International Golf Club opened in February in Dubai, the United Arab Emirates, and a nearby Trump-branded golf course designed by Tiger Woods is under construction.

The president's oldest son, Donald Trump Jr., now running the Trump Organization while his father acts as the American leader, met Dubai billionaire Hussain Sajwani, the owner of DAMAC Properties, to take advance payments for the two Dubai golf courses, according to a report by the US Federal Election Committee.

Now, it seems, those two are again talking business.

On Saturday, the president arrived in Saudi Arabia on his first foreign trip. Donald Jr. seems to have been using the junket as an opportunity to nail down more deals in the region. Dubai business mogul Sajwani posted a picture on Instagram on Tuesday showing Trump Jr. at a large banquet table containing Middle Eastern food and French fries.

"It was great having my dear friend and business partner Donald Trump Jr. over for lunch," the photo caption stated. "Discussing new ideas and innovation always make our meetings even more interesting."

DAMAC apparently has plans with the Trump Organization in the coming years, despite the "no new foreign deals" promise.

On Monday, a quarterly earnings filing by the holding company that owns DAMAC detailed another new subsidiary called Trump International Golf Club LLC, documenting that it is a "golf club" but providing no further details, AP reports. It also listed plans for a "luxury boutique hotel to be operated by the Trump Organization" near the new golf course, and said the company's expansion includes "branding arrangements with… the Trump Organization."

In the week before Trump was inaugurated, he declared that DAMAC made $2 billion in deal offers to the Trump Organization, a figure confirmed by the Middle Eastern real-estate company.

The president's son was also paid an unknown amount to speak at the 2017 commencement event for Dubai's American University earlier this week. The move has been criticized as a way to drum up name recognition and respect for the Trump brand in Dubai, which has a stake in the university.

Although a US president is technically prevented from using his office as a means to further his personal business interests, Trump has shown little regard for the Emoluments Clause of the US Constitution, instead handing control of his many branded organizations to his sons and keeping key data, including his IRS tax information, out of the public eye.

The Emoluments Clause specifically prevents public officials from accepting gifts or payments from foreign governments and companies without Congressional approval, according to AP.