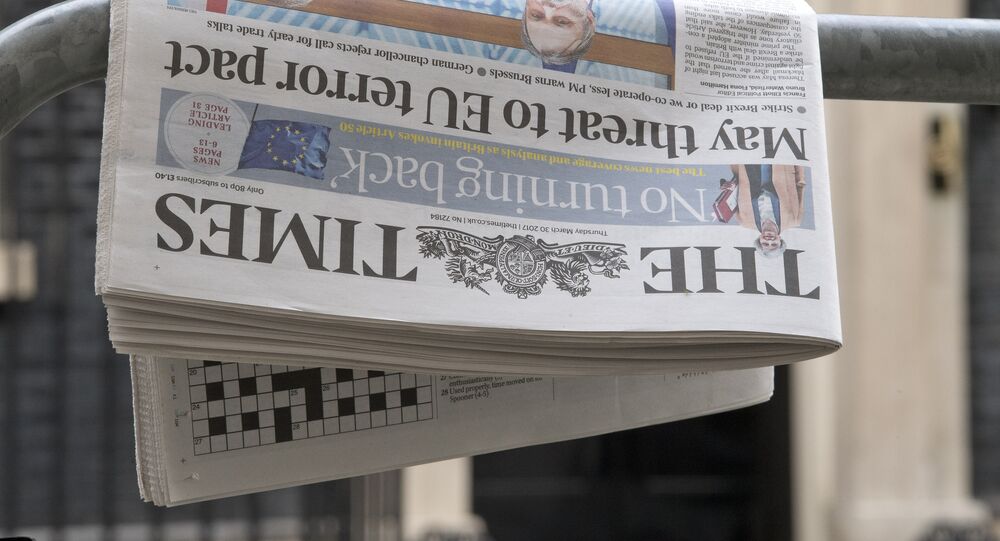 The Russian Embassy in the UK is up to its social media antics again, this time eviscerating the UK's The Times newspaper over its use of a photoshopped image of Russian President Vladimir Putin accompanying a story about hacking.

On Friday, The Times published a story about WannaCry, the large-scale cyber hacking attack infecting over 230,000 computers worldwide and hitting many private and government services in over 150 countries, including Britain's National Health Service.

The piece, titled "Hackers have given us a final warning," is illustrated in both the online and print versions of the newspaper with photoshopped images of Russian President Vladimir Putin and North Korean leader Kim Jong-un superimposed over a screenshot of a computer infected by WannaCry.

© Photo : Pixabay
'Thank God It Wasn't Us This Time': Russian Embassy in UK Trolls British Media
The corresponding caption explains: "Both Vladimir Putin and Kim Jong-un, far right, deploy hackers but [sic] it is known who was behind the WannaCry ransom attack."

The Russian Embassy in the UK, well-known for its trolling of Western politicians and media over their paranoid claims about Russia being responsible for everything wrong with the world, couldn't help but comment.

Addressing The Times' official Twitter account, the Embassy suggested that the use of the Russian president's image amounted to "cheap parlour tricks," driving its point home with the phrase "#russiansdidit again," making use of the popular hashtag.

The Times seems to have an obsession of going after Russia every chance it gets. Earlier this month, the newspaper featured story titled 'Putin's Propaganda', which accused RT and Sputnik of being a 'monstrous state instrument of fraud under the guise of news.'

© Photo : RUSSIAN FOREIGN MINISTRY
No Source Too Anonymous: As Leaks Pour From White House, Speculation on Russia, Comey, Kushner Rages
Taken aback by the newspaper's mendaciousness, the Russian Foreign Ministry issued an official response, using The Times' story as a crowning example of the false information being peddled about Russia in the Western media.

The Foreign Ministry highlighted that the newspaper "never ceases to amaze" with materials like 'Putin's Propaganda.' The Ministry reminded The Times that the activity of Sputnik and RT had been checked by British media regulator OfCom (Office of Communications), and that neither media resource has been flagged for containing materials containing falsehoods.

On the contrary, the Foreign Ministry said, it is The Times that is regularly censured for the distribution of 'fake news'.

Doing a bit of trolling of its own, the Foreign Ministry joked that "it cannot be excluded that feelings of journalistic jealousy may have pushed the editors of The Times to this slander against RT and the Sputnik News Agency."