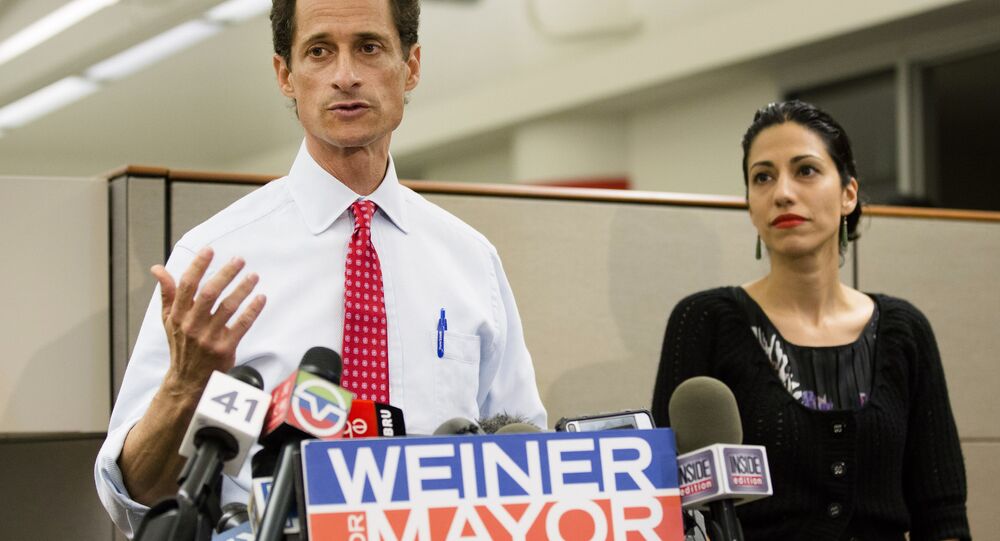 Former New York congressman Anthony Weiner pleaded guilty to trading sexual messages with a 15-year-old girl on Friday, tearfully telling a Manhattan court about the “destructive impulses” that shattered both his political career and his marriage.

The investigation into Weiner’s obscene exchanges with a high school girl in North Carolina whose age he was reportedly aware of was the culmination of a snowballing series of sex scandals dating back to 2011, when Weiner resigned from Congress to enter the mayoral race for New York City.

In May of that year, a picture of a man in his underwear briefly appeared on his Twitter page, an act he called a "prank" perpetrated by a hacker. He never confirmed or denied being the man in the picture.

A few months after Weiner announced his mayoral bid, a blogger published screenshots of sexual conversations Weiner allegedly had with a woman other than his wife.

His wife, former Hillary Clinton aide Huma Abedin, joined her husband at a press conference held to address the sex controversy, saying she loved and forgave her husband even though he made "horrible mistakes, both before he resigned from Congress and after."

In his guilty plea, the 52-year-old admitted to "compulsively” seeking the attention of women on social media, telling the court, “I engaged in obscene communications with this teenager, including sharing explicit images and encouraging her to engage in sexually explicit conduct, just as I had done and continued to do with adult women … I knew this was as morally wrong as it was unlawful."

He added, "I have a sickness, but I do not have an excuse… I apologize to everyone I have hurt. I apologize to the teenage girl, whom I mistreated so badly."

Prosecutors will seek a sentence of 21 to 27 months in prison for Weiner, who wept as he read his four-paragraph statement.

Abedin filed for divorce on the same day as her husband’s plea, bringing an "Anonymous vs. Anonymous" filing, likely to avoid media attention.

Since the filing was uncontested it is likely that there won’t be much conflict over assets or over custody Abedin’s five-year-old son with Weiner, Jordan.

Acting Manhattan US Attorney Joon H. Kim told reporters after the hearing that Weiner’s behavior "was not only reprehensible, but a federal crime, one for which he is now convicted and will be sentenced."

5 Questions About the CIA Sex Scandal