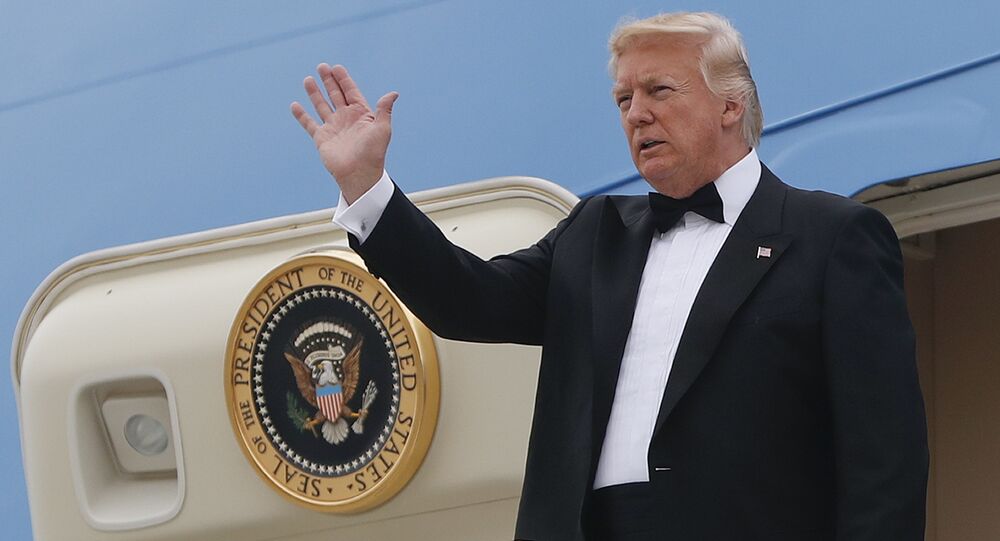 As US President Donald Trump heads out for his first foreign trip, Russian political scientist Igor Shatrov observes that the president's choice of destinations says much about his foreign policy priorities.

"[Trump's] trip begins Friday with a stop in Saudi Arabia, followed by planned visits to Israel and the Vatican. Trump will later attend the 28th NATO summit in Brussels, Belgium, and the 43rd G7 summit in Taormina, Italy," Fox News reported.

For its part, CNN couldn't conceal its sarcasm claiming that "if President Donald Trump's crucial first foreign trip passes off without a disaster, it will be considered a success."

The US president starts his first foreign tour amid simmering tensions at home: on Wednesday, the US Justice Department appointed a Special Counsel to look into the so-called "Russian investigation" and find out whether any "collusion" between the Trump campaign and Russian officials has ever taken place.

Trump Trip: Holy Pilgrimage or Unipolar Power Play?
Moscow has repeatedly denied both Russia's alleged interference in the US 2016 presidential election and its links to the Trump campaign, denouncing the accusations as completely unfounded and absurd.

However, Ed Rogers of the Washington Post views the "international trip" as "an opportunity for Trump and his staff."

"Presidential trips overseas can leave some problems behind and begin a reset even if relief is only temporary," the journalist remarked.

On the other hand, "Trump's meetings in Saudi Arabia, Israel, and the Vatican are opportune settings for this administration to make a bold statement to the world that the United States is stronger and more committed than ever to leading," Rogers believes.

Speaking to Radio Sputnik, Russian political scientist Igor Shatrov emphasized the importance of Trump's tour, stressing that it could shed some light on the president's future foreign strategy highlighting his priorities.

"In my opinion, [Trump's] priorities are natural: currently, the Middle East is the most troublesome region of the planet. But this is not just a Middle Eastern tour, it's practically a round-the-world trip, because having visited the Middle East [Trump] will fly to the US' traditional partners — after Jerusalem there will be Rome, the Vatican, a visit to the NATO headquarters, and then a meeting of the G7," Shatrov said.

© AP Photo / Evan Vucci
America First: Trump Promises to Protect US Interests During First Overseas Trip
Shatrov expressed his doubts regarding the efficiency of Trump's foreign tour, and still, these are the steps the US president needs to take right now, he noted.

"The efficiency has to be prepared in advance, as a result of lengthy negotiations. But the Trump administration has little time for such activity… Most likely, [the Trump administration] is seeking positive externalities and PR — [the president is going] to pay tribute to the centers of world religions," the Russian political scientist suggested.

"I believe that in this case there are some 'marks' which Trump decided to make: the Christian and the Islamic world are parts of Donald Trump's sphere of interest. I think that he wants to receive a blessing from Pope [Francis]… It seems to me that [Trump] has his own calculations and plans and that he pursues a certain goal," Shatrov stressed.