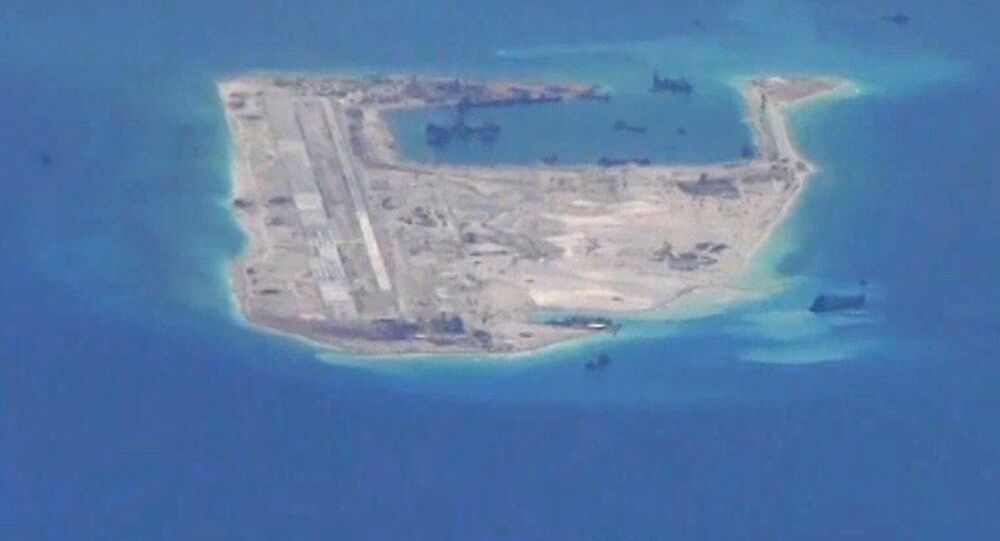 China has been deploying Norinco CS/AR-1 55mm anti-frogman rocket launcher defense systems on its artificial island for at least five years, Russian military expert Vasily Kashin told Sputnik, adding that given the narrow specialization of the short-range weapon system the deployment cannot be described as "militarization."

While the US and EU mainstream media have raised the alarm over Beijing's alleged "militarization" of disputed islands in the South China Sea, the whole thing appears to be blown out of proportion, Russian military expert Vasily Kashin told Sputnik China.

On Thursday, Reuters reported that China has installed rocket launchers on a disputed reef in the South China Sea, citing a Chinese state-run media outlet.

"The state-run Defense Times newspaper, in a Tuesday report on its WeChat account, said Norinco CS/AR-1 55mm anti-frogman rocket launcher defense systems with the capability to discover, identify and attack enemy combat divers had been installed on Fiery Cross Reef in the Spratly Islands," Reuters highlighted, adding that Fiery Cross Reef is also claimed by the Philippines, Vietnam, and Taiwan.

Speaking to Sputnik, Kashin remarked that despite the ongoing media fuss over the report, "this is nothing new."

"This weapon system first appeared in one of the Chinese media reports on the performance of artists of the military song and dance ensemble, published in early 2013. The system, which was clearly seen in the photo behind the dancing artists, could be identified as the widely known Russian-made DP-65 anti-saboteur grenade launcher system," Kashin told Sputnik.

© AFP 2021 / HOANG DINH NAM
China, ASEAN Countries Agree Draft Framework for South China Sea Code of Conduct
The military expert elaborated that the DP-65 system consists of a hydroacoustic station capable of detecting a combat diver at a distance of up to 500 meters and up to four remotely controlled 55-mm grenade launchers.

The system was manufactured by Scientific Production Association 'Bazalt', one of Russia's major developers and manufacturers of cutting-edge ammunition for the Land Forces, Air Force, and Navy.

"The DP-65 is able to independently detect an underwater target and attack it either automatically or manually," Kashin explained, "Due to the specificity of the aquatic environment, the underwater explosion of a small grenade [launched by the DP-65] will incapacitate an enemy combatant diver at a large distance."

"These systems are widely used by the Russian Navy's large warships, allowing them to protect themselves from enemy combat swimmers and terrorists," the military expert remarked.

© AFP 2021 / STR
Military Buildup: China Installs Anti-Frogman Guns in South China Sea
According to Kashin, China started producing the system most likely under a Russian license. However, it also cannot be excluded that it copied them from earlier purchased single samples, he added. It appears that since those times China has managed to develop its own advanced versions of the Russian DP-65 system.

The Russian military expert believes that the deployment of the Norinco CS/AR-1 55mm anti-frogman rocket launcher defense system on Beijing's artificial islands in the South China Sea is "a reasonable measure from a military point of view."

Several grenade launchers of this type could ensure the protection of China's islands created in the Spratly Archipelago, Kashin noted, citing mounting tensions in the South China Sea.

While Reuters insists that the deployment of the rocket launcher defense systems on Fiery Cross Reef is primarily aimed at fending off Vietnamese intrusions, the real reason could have been the challenge posed by US Navy SEALs, the Russian military expert suggested.

However, according to Kashin, the move could hardly be described in such terms as "militarization."

"Given the narrow specialization of the DP-65 and its Chinese versions and [the weapon's] short range, the deployment of such systems on the [disputed] islands should be regarded as a pure defense measure that cannot shift the balance of power in the South China Sea," Kashin told Sputnik, adding that it also cannot be considered as a step towards the "militarization" of the region.

At the same time, however, the move of the Chinese military signals that Beijing is bearing various scenarios in mind and is actively preparing for them, the military expert remarked.