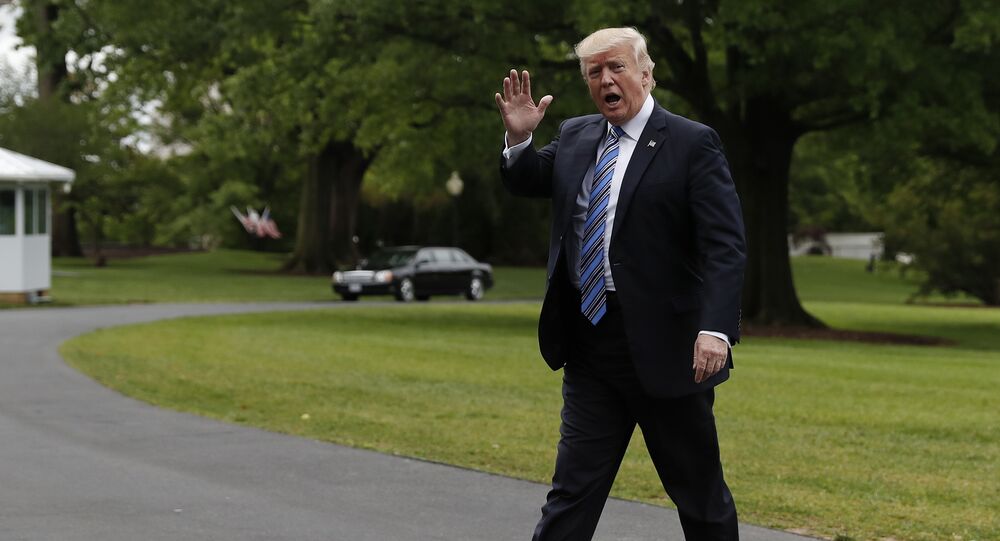 Appointing a Special Counsel to examine the Trump campaign’s alleged "collusion" with Russia is opening Pandora's Box, Wall Street analyst Charles Ortel told Sputnik. "What starts out as a narrow investigation can widen and touch subjects not originally contemplated," he said.

The Justice Department appointed a Special Counsel Wednesday to oversee the probe into Russia's alleged involvement in the 2016 presidential election including "any links and/or coordination between the Russian government and individuals associated with the campaign of President Donald Trump."

"My decision is not a finding that crimes have been committed or that any prosecution is warranted. I have made no such determination. What I have determined is that based upon the unique circumstances, the public interest requires me to place this investigation under the authority of a person who exercises a degree of independence from the normal chain of command," Deputy Attorney General Rod Rosenstein said in an official statement.

© East News / AP Photo/Steven Senne
Comey's Dismissal: 'A Long-Dwelling Swamp Creature Cannot Drain the Swamp'
According to the Atlantic, the appointment of a Special Counsel is "a significant concession to Democratic legislators," which signals "the seriousness of the ongoing federal investigation into Russian interference."

So, the question arises as to what this appointment really means for US President Donald Trump.

Sputnik got in touch with Charles Ortel, Wall Street analyst and investigative journalist who has been looking into the Clinton Foundation's alleged fraud for the last few years, asking him to share his views on the matter.

What has become the trigger for the appointment?

"The person who serves as Deputy Attorney General, Rod Rosenstein, is a distinguished public official who previously held the post of US Attorney in the state of Maryland from July 2005 through April 2017 — so he held the confidence of George W. Bush, Barack Obama, and Donald Trump," Ortel responded.

"It fell to Deputy AG Rosenstein to make this decision to appoint a "Special Counsel" because Attorney General Jeff Sessions recused himself," he added.

The Wall Street analyst noted that he had not seen the specific mandate that the Special Counsel had been given.

"I hope it is not simply restricted to whether Russia or any foreign power may have interfered, but also to whether elements within our own federal government may also have interfered. I also hope it extends to possible interference in both sets of primaries," he stressed.

© Fotolia / Serkat Photography
Keeping an Eye on Trump: CIA Whistleblower Points Finger at Clapper, Brennan, Comey
"Agitation by Democrats is likely a contributing factor," Ortel continued, "but so far I believe Rosenstein and Sessions have demonstrated they are fair-minded public servants dedicated to upholding the US Constitution and the rule of law. This is refreshing and in stark contrast to the behavior exhibited by former President Obama, Loretta Lynch, and Eric Holder."

He highlighted, however, that "appointing a Special Counsel is opening Pandora's Box — what starts out as a narrow investigation can widen and touch subjects not originally contemplated."

Who is new Special Counsel Robert S. Mueller III and is his appointment yet another step toward Donald Trump's impeachment?

"Robert Mueller has a long and distinguished career as a lawyer and as an investigator — he served as FBI head from September 4, 2001, through September 4, 2013 — these were challenging years," the investigative journalist said.

As for potential impeachment, it's not quite that simple, he noted.

"Impeachment is a long process that starts in the House of Representatives where that body must decide whether President Trump may have committed 'Treason, Bribery or other High Crimes and Misdemeanors'," Ortel told Sputnik, "We are only at the start of an investigation and the public certainly knows little concerning the Trump Presidency that is not yet even one-third of a year old…"

"Should Mueller remain in his role as Special Counsel, he will need time to define the boundaries of his investigation and then to complete it fully, fairly, and independently. After he reaches his conclusions and issues his findings, then the House of Representatives may be presented with evidence that requires commencing an Impeachment inquiry, or it may decide that Mueller has not gone far enough. Alternatively, Mueller may issue a convincing set of findings that exonerates the Trump Administration," the Wall Street analyst elaborated.

"In either case, the process will take many months," he stressed.

© REUTERS / Jim Lo Scalzo/Pool
U.S. President Donald Trump is applauded after delivering his first address to a joint session of Congress from the floor of the House of Representatives iin Washington, U.S., February 28, 2017

In his previous interview with Sputnik Ortel pointed out that there was the way to sort the "Russian interference" issue out once and for all.

"I am all for letting a special prosecutor have a wide mandate to investigate what happened during the 2015/16 election cycle, including which nations may have interfered in our election and whether our nation interfered in foreign elections and referenda," Ortel told Sputnik last week, adding that "special focus must be placed upon the ways in which various charities (real and fake) and [US] political action organizations may also have colluded to entrench political power and gain financially."

While clarifying his own remark, the investigative journalist called attention to the fact that "during the Bush-Clinton-Bush-Obama-Trump period, multinational players and foreign interests have come to realize just how valuable it can be to curry favor with American politicians."

"As we interact, former President Obama is continuing a practice emboldened by the Clintons of raising indefensibly outsized payments for 'speeches', for 'books", and contributions to a 'charity' named after himself," Ortel pointed out.

"We might start with 'no-bid' contracts but also investigate all awards to entities of say, $10 million or more, cumulatively from 2001 through 2016, entity by entity to see what whether there were any 'quid-pro-quo' arrangements," he stressed, "In this regard, the Obama calendar years (2009 — 2016) scream out for detailed inquiry as during those years government debt and deficits soared."

"It is among the oldest questions known to humans — 'Who benefits?'," Ortel noted, "Americans and friends around the world deserve answers — and President Trump still holds the power to motivate proper, searching, and empowered inquiries."