The US House of Representatives passed a bill that, if signed into law, would allow imposing sanctions on those who provide financial or military assistance to Syrian President Bashar al-Assad. Political analyst Andrei Sidorov told Radio Sputnik that this initiative is part of a broader anti-Russian campaign.

"This bill was introduced several weeks ago. It has a broad reach, covering Russia, Iran, Hezbollah and many others. They plan to slap restrictive measures on Russia in relation to war crimes supposedly committed during bombing operations in Syria. What can I say? The anti-Russian campaign, which is largely fueled by the US Congress, has continued. Simultaneously, a special counsel was appointed to investigate alleged 'Russian interference' during the presidential election in the US. The bill is only a part of this campaign," Sidorov, who heads of the Department of International Organizations and Global Political Processes at the Moscow State University, explained.

Defense analysts told Sputnik that the bill, even if passed in the Senate and signed by President Trump, would not have a lasting effect on the Russian Armed forces or the country's defense industry. 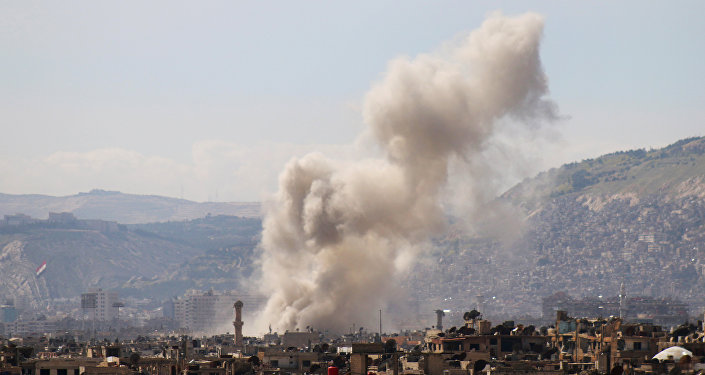 © AFP 2019 / Mohammed EYAD
New US Sanctions on Damascus Allies to Hinder Anti-Terror Fight in Syria - Russian Lawmaker
"I don't think that this bill will change anything. Communication through the channels of military and technical cooperation is virtually non-existent at the moment. We have never purchased components for our military equipment in the US. In this respect we do not depend on them. They have no means to influence the state defense procurement and acquisition or the rearmament program. This is why they have opted for symbolic sanctions," editor-in-chief of the Russian magazine Arsenal of the Fatherland, Viktor Murakhovsky, said.

The analyst added that Washington's latest move appears to be linked to Russia's growing military clout.

"This is in line with the policy which the United States has carried out since the Russian Armed Forces launched an operation aimed at destroying terrorists in Syria. They clearly are unhappy that Russia is once again capable of operating in remote theaters," he said, adding that Moscow should adhere to its foreign policy despite Washington's stance.

Political analyst Alexei Fenenko, an associate professor at Moscow State University's Faculty of World Politics, shared these sentiments, saying that new sanctions, if imposed, would not have major implications since Russia and the United States do not cooperate in military and defense areas. He added that Russia could introduce painful countermeasures.

"Trump is constantly being slapped on the wrist when it comes to foreign policy," he said. "I think that there is a sort of a schedule of introducing new sanctions against our country. It does not depend on who is the President of the United States at the moment."