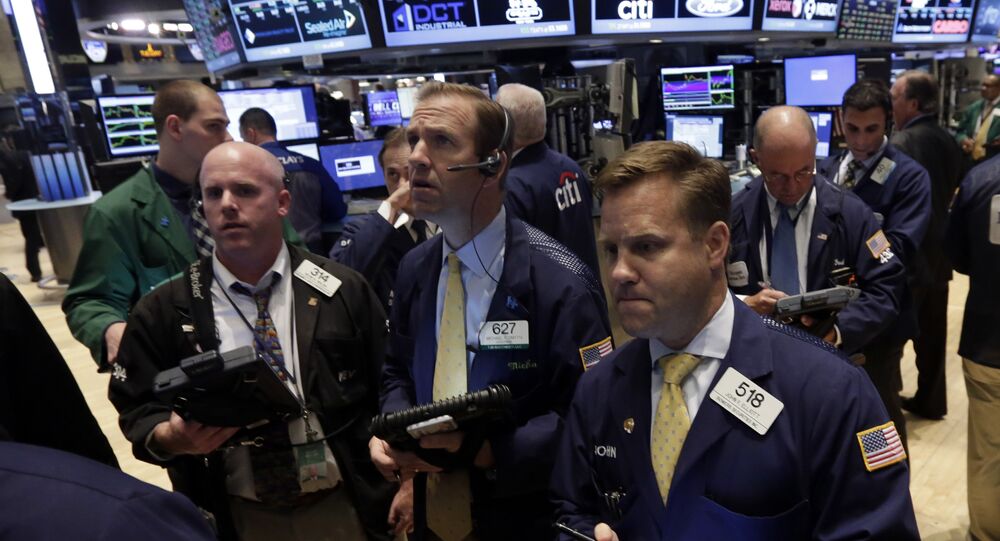 Why Controversy Over Trump Sends Shockwaves Through US Stock Markets

© REUTERS / Jim Lo Scalzo/Pool
Democrats Going to Do Whatever It Takes to Impeach Trump
The US stock market has slumped over mainstream media reports that US President Donald Trump allegedly asked former FBI Director James Comey to halt an investigation into former national security adviser Michael Flynn and his suspected "ties" with Russia.

To add to the growing uncertainty the Justice Department appointed Wednesday a special counsel to investigate possible "collusion" between Trump associates and Russian officials.

Although the White House keeps denying the allegations, the looming threat of a potential impeachment may jeopardize Trump's bold plans to advance tax cuts and other growth measures that boosted stocks.

As a result "the Dow and S&P recorded their worst day since September of last year" on Wednesday, while "the Nasdaq composite posted its worst session since June 24," CNBC reported.

Radio Sputnik got in touch with Marc Ostwald, Global Strategist at ADM Investor Services, asking him to comment on the matter.

"In market's terms basically there were a lot of doubts mounting for quite some time that a lot of promised reforms, tax cuts, changes to the Dodd-Frank [Wall Street Reform and Consumer Protection Act] are just not going to be delivered because… of a huge gulf between the executive [branch] i.e. the President and Congress i.e. legislature," Ostwald told Radio Sputnik.

According to the expert, while looking at the incoming economic data, financial markets are "probably overstating some of the weak numbers that we've had."

However, the question arises whether the whole optimism and the big rally that the US had seen since the November elections, above all in equity markets, was really justified, he added.

Ostwald highlighted that first of all one needs to see whether the allegations against Donald Trump will be proven in the court of law.

"I suppose the most important thing is to understand whether Congress will actually vote to get Trump out, because he is an enormously divisive figure: half the country is for him and half the country is distinctly against him," the expert stressed.

So, who is suffering the most from the recent incident?

"Perspective is really-really needed here," Ostwald responded, "Yesterday's [May 17] fall was very very modest, it has just fallen off a little bit from the all-time highs… [On the other hand] in historical terms the volatility is still inordinately low."

© AP Photo / Drew Angerer / GETTY IMAGES NORTH AMERICA
Trump Team Knew About FBI Probe Into Flynn Before Naming Him Top Security Aide
While there are actually no grounds for panic, the situation "could develop into something more severe" if the uncertainty over Trump continues.

"The big risk here is this huge amount of complaisance in financial markets at the moment. No one really believes that we are going to have a substantial sell-off and the Gap Risk, the risk of a sharp dislocation as we had back in 1997, has not been this high for a very-very long time. So the biggest risk is people don't take the sell-off seriously," he told Radio Sputnik.

Meanwhile, the Federal Reserve's project to increase interest rates two more times this year has been thrown into doubt over the Trump-Flynn case.

"The bond market is interpreting what could be the deepest crisis of Donald Trump's presidency as throwing the Federal Reserve off its path for interest-rate increases this year," Bloomberg noted Wednesday.

"The key risk is still related to interest rate," Ostwald told Radio Sputnik, "At some point, the central banks will basically start to remove a lot of the accommodation that they've given the world over the past ten years. At that point then there will be a big call on markets to basically take up the assets they hold on the balance sheet and give back the cash they've been injecting into the system."

According to Ostwald, that will become the moment of ultimate truth for understanding whether these low-interest rates and quantitative easing really work.

Ivanka for President! US Citizens Favor Trump's Daughter More Than Himself