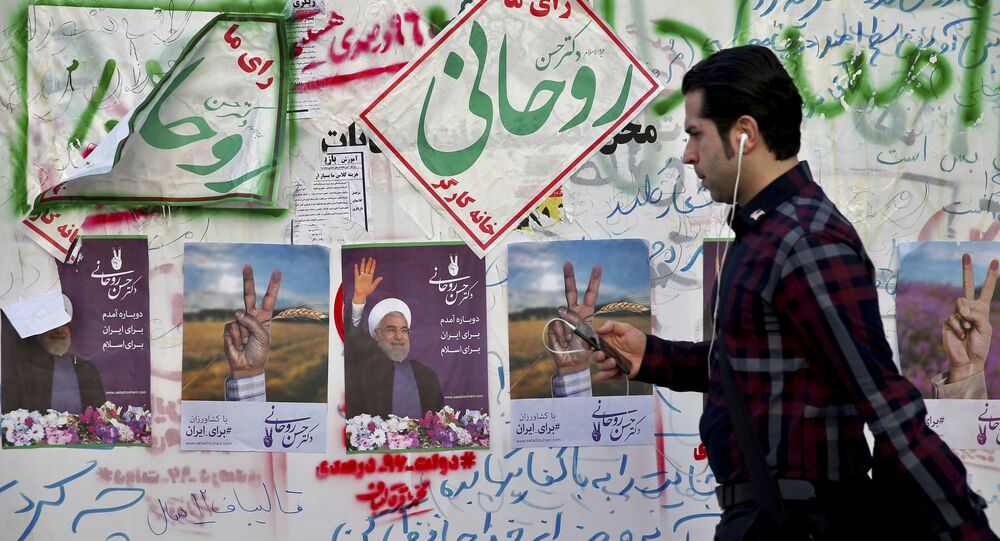 The fact that not a single Iranian president has failed to secure a second term since 1981 points to a voting pattern in the country, Iran analyst at Middle East Eye and director of research group Dysart Consulting, Mahan Abedin, told Radio Sputnik, adding that incumbent Hassan Rouhani is unlikely to become an exception to this rule.

This is not to say that all Iranian presidents served two terms.

"The first president, Abolhassan Banisadr, was impeached," the analyst said. "The second president, Mohammad-Ali Rajai, was killed in a bomb attack in August 1981. Basically since then every president who contested the second term has won. I think it is an important precedent. It speaks to a voting habit of the Iranian electorate. I think they prefer the devil they know to the devil they don't."

Abedin suggested that Rouhani, who has been in office since 2013, is likely to win the election.

"Polling does seem to suggest that Rouhani has a lead. He has a better political machine behind him. His campaigning has been more effective because he has got more money behind him. Campaign materials that I have reviewed in the past few days have been terrific, very good. Rouhani certainly has a momentum," he said.

"Raisi is basically the custodian of the Imam Reza shrine in Mashhad," the analyst said. He heads Astan Quds Razavi, "a very important institution not only because it deals with millions of Shia pilgrims who go to the Imam Reza shrine in Mashhad every year from all corners of the Islamic world, but because there is a vast business and charitable empire attached to that foundation. Its estimated revenue is $15 billion a year which is substantial by any standard. It also employs tens of thousands of people."

© REUTERS / President.ir
Iran Installs New Missile Defense Systems at Bases Across Country - Reports
The analyst further mentioned that Raisi was at one stage considered to be a likely successor to Ayatollah Ali Khamenei.

"But for some reason they put [Raisi's] name up for the presidency," he added. "I must say that he performed exceptionally poorly during the campaign process, worse than expected. His performance in the televised debates was extremely poor. He is mild-mannered. He is not really a politician. In fact he has no political background whatsoever. His background is in the judiciary. He is not a particularly good debater."

Slightly Over 66% of Iranians Plan to Vote in Presidential Elections