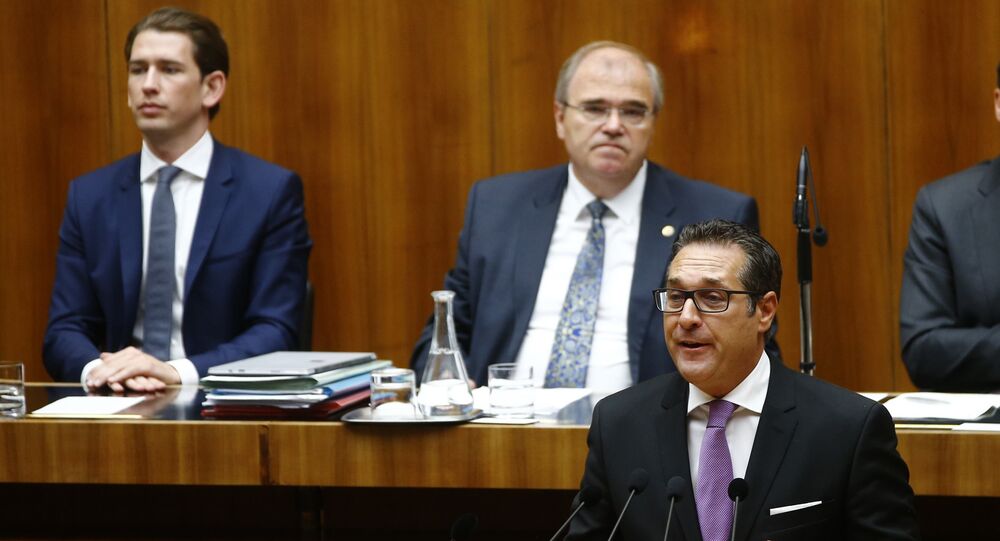 Austria's conservative People's Party under new leader Sebastian Kurz and opposition Freedom Party of Austria (FPO) are becoming strong rivals for the ruling Social Democratic Party (SPO) and both have high chances to win the parliamentary elections in the country, Roman Haider, a member of the Austrian parliament from the FPO, told Sputnik.

"It will be a very close race between the three parties. SPO, the People's Party and the Freedom Party. During the last months, every survey showed that FPO was leading. Now with that new leader of the People’s Party Mr. Kurz, who wants to follow a new trend in politics and create a new movement and who wants to get away from the image of an old conservative party for OVP, he may manage to improve his chances, as well as the Freedom Party," Haider said.

© AP Photo / Burhan Ozbilici
Austrian Chancellor Kern Offers Vice Chancellor Post to Foreign Minister Kurz
On Sunday, Kurz, the youngest foreign minister in Europe, announced plans to launch a "movement" that will include new names from the civil society on the OVP's list of candidates for the upcoming elections, drawing inspirations from France's President Emmanuel Macron’s La Republique En Marche! (The Republic on the Move!) movement, which field for the upcoming legislative elections in France mostly political newcomers.

Haider underlined that if Kurz leads his transformed OVP into the elections, he may have a chance to win the elections.

"I believe he [Kurz] might manage to win the election as well as our party. As I see it today, it will be a very close race, there will be 3 parties that parted from each other by 1 percent but the things still may change as well," the FPO member said.

Recent opinion polls show that the FPO is running first on roughly 30 percent, slightly ahead of SPO, with the OVP being third.

The Austrian lawmakers have decided to hold snap elections following the collapse of the coalition between the SPO and the OVP, which was meant to govern until September 2018. The breaking of the coalition reportedly occurred due to disagreements over reforms.