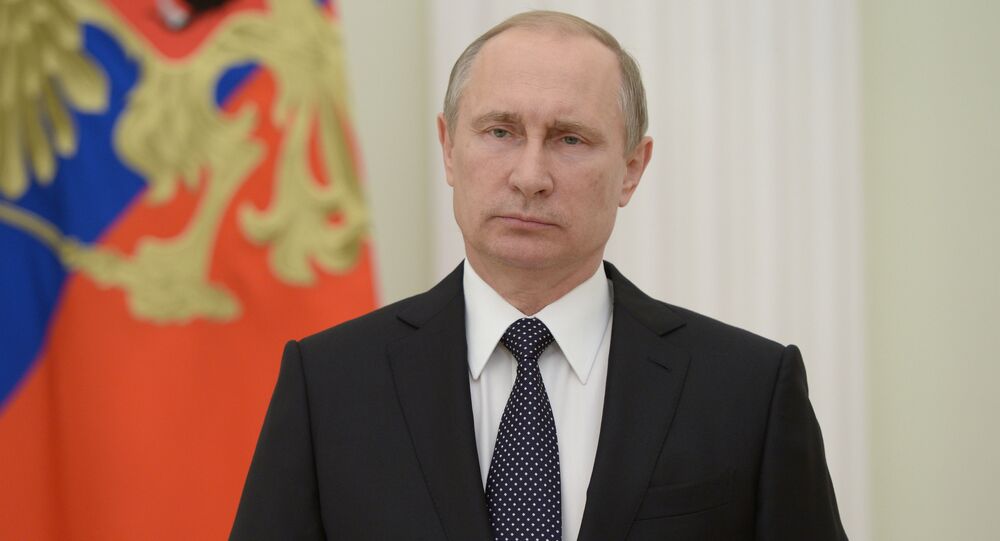 Russian President Vladimir Putin held a joint press conference with Italian Prime Minister Paolo Gentiloni following a meeting in Sochi on Wednesday and commented on Moscow's ties with Rome as well as allegations claiming that the US president provided Russia with secret information.

Putin said that Russia is ready to provide the US Congress with the transcript of the talks between US President Donald Trump and Russian Foreign Minister Sergei Lavrov if Washington considers it appropriate, when commenting on claims that the US president allegedly shared top secret information with Russia.

"Political schizophrenia is developing in the United States. I cannot explain differently the accusations against the current president claiming he revealed some secrets to Lavrov."

© Photo : RUSSIAN FOREIGN MINISTRY
What's Behind Bogus Story About Trump Sharing Sensitive Intel Data With Russia
The situation in the US is being in turmoil under anti-Russian slogans, Putin said, adding that Trump is not being allowed to work properly. He added that Russia highly estimates the results of Lavrov's visit to the US which followed after his US counterpart Rex Tillerson's visit to Moscow.

"At first, when we followed the developing process of the internal political struggle [in the US], it looked ridiculous. Today it is not just sad, it causes  concern because people who generate such nonsense can generate even bigger nonsense [in future]," Putin said.

The comment came after the Washington Post reported that Trump told Russian Foreign Minister Sergei Lavrov and Ambassador to the United States Sergei Kislyak information about a terror threat involving laptops on airplanes. The information reportedly came from a US partner through an intelligence-sharing agreement.

Later, Trump himself took to Twitter and said that he had every right to share information on terrorism and the safety of flights with Russian officials.

© Sputnik / Sergei Malgavko
'We Want Russia to Be Equal Partner in European Economic Integration' - Italian MP
Putin said that Italy is one of the countries with which Russia has one of major trade turnover despite EU sanctions against Moscow. He said that Italian businesses are actively investing in Russia.

Meanwhile, the Italian prime minister said that Italian companies has always had faith in the Russian market, adding that the trade ties between the states are improving.

"Our companies had always trusted this country … Approximately 600 Italian companies work in Russia."

He said that Russia counts on Italy's participation in diversification of Russian gas supplies to Europe via the Southern Route.

"We are counting on the participation of Italian companies in modern, promising work to produce hydrocarbons and in projects to diversify the supply of Russian fuel to Europe. I mean the construction of new gas mains, in particular along the southern route," Putin told reporters following talks with Italian Prime Minister Paolo Gentiloni.

Russian ties with the EU cannot be called "normal," Putin said, refering to sanctions and called for "getting rid of their excessive politization." Putin urged to restore constructive cooperation. Moscow and Rome agreed on deepening foreign policy coordination, he said.

"I am convinced that the expansion of economic cooperation between Russia and European countries… could contribute to building confidence in entire Eurasia," the Russian president added.

"Of course we exchanged opinions on the most pressing international regional issues, we touched upon the crisis situations in Syria, Libya, Ukraine, on the Korean peninsula. Russia and Italy support uniting the international community’s efforts to coutnter international terrorism, the main threat of today … Overall, we agreed to deepen further our foreign policy coordination," Putin told a press conference.

Gentiloni said that work with Russia on all issues is needed in order to resolve international crises. In his turn, Putin said that Russia would welcome anyone who wants to cooperate with it in any format.

The Italian prime minister said that the decision to extend anti-Russian sanctions cannot be taken automatically.

"We all know where these sanctions came from, we know the decisions that were adopted by the European Union, they were all connected with the Ukrainian crisis. We know that a positive response [sanctions lifting] is connected with the implementation of the Minsk agreements. From our point of view, our efforts, which we have made and continue make within the framework of the European Union and NATO, is to emphasize that there can be no automatic extension of the sanctions," Gentiloni told reporters following a meeting with Russian President Vladimir Putin.

"No one thinks that Italy would unilaterally cut ties with our allies but, of course, decisions related to the sanctions should not be taken automatically," the prime minister added.