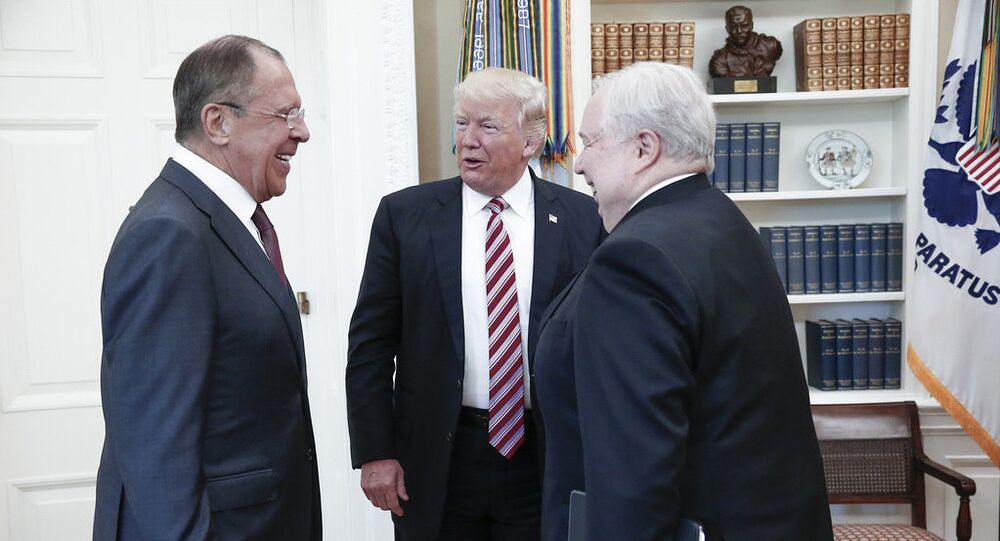 US media claimed that President Donald Trump revelaed classified information to the Russian foreign minister and the Russian ambassador to the US during their meeting last week. According to political analyst Nikita Danyuk, the scandal signals that struggle against Trump continues in the US establishment.

© AP Photo / Andrew Harnik
That Awkward Moment: Trump 'Wanted to Be Friends With Russia But Ruined Everything'
On Monday, The Washington Post claimed that United States President Donald Trump "revealed highly classified information to the Russian foreign minister and ambassador in a White House meeting last week," saying with reference to current and former US officials that the alleged disclosures "jeopardized a critical source of intelligence" on Daesh.

Trump has already denied the claim and said that he had "an absolute right" to share with Russians facts on terrorism and air flight safety.

"As President I wanted to share with Russia (at an openly scheduled W.H. [White House] meeting) which I have the absolute right to do, facts pertaining to terrorism and airline flight safety. Humanitarian reasons, plus I want Russia to greatly step up their fight against ISIS [Daesh] & terrorism," the president stated on Twitter.

© Photo : RUSSIAN FOREIGN MINISTRY
Kremlin Dismisses Media Claims on Trump Allegedly Passing Secret Info to Lavrov
Earlier, US Secretary of State Rex Tillerson said that the claims are false, while Trump in a meeting with Lavrov and Kislyak had discussed a wide range of issues related to counterterrorism, but had not mentioned sources, methods or military operations.

In an interview with Radio Sputnik, Nikita Danyuk, deputy head of the Institute for Strategic Studies and Prognosis at RUDN University, pointed out that the political struggle against Trump continues within the US establishment.

"There have been persistent attempts to discredit Donald Trump since the beginning of his term. Political struggle against him is still underway. At the same time, his relations with media remain tense. I think this stovepiping is also related to the dismissal of FBI Director James Comey. The recent allegations against Trump are retaliation from the security and intelligence community," Danyuk said.

According to the expert, the situation evolving around Trump and his team is not optimistic.

© AP Photo / Carolyn Kaster
How Comey Dismissal Might Play Up to Trump's Opponents
"Despite Trump’s intention to find common ground for constructive relations with Russia, his opponents will continue to undermine those attempts," he said.

Commenting on intelligence data sharing, Danyuk underscored that it is a routine and standard procedure.

"Such information is shared by intelligence services and defense ministries. Of course, as US Commander in Chief Trump has every right to give intelligence information to those fighting against global terrorism. But the manner in which the situation is covered by media proves that Trump still doesn’t have a solid team," the expert concluded.

Tillerson Says Trump Did Not Discuss Sources, Methods With Lavrov

Tillerson: Current US-Russia Relations Are 'Not Healthy for the World'