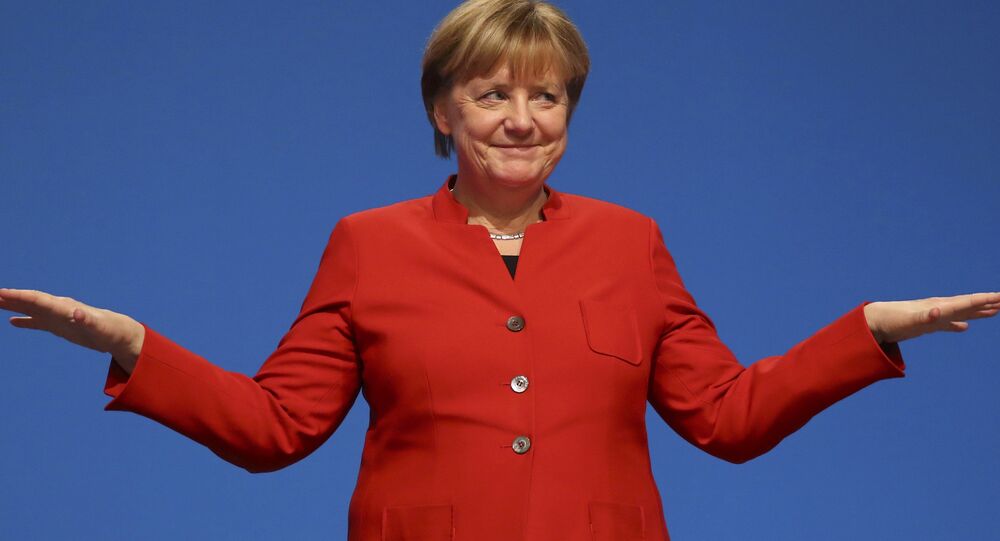 German Chancellor Angela Merkel’s CDU Party has won the regional election in the federal state of North Rhine-Westphalia. The results of the voting have drastically changed the situation four months before the general election in Germany, Deutsche Welle wrote.

© REUTERS / Hannibal Hanschke
Merkel’s CDU 7% Ahead of Social Democrats Four Months Before Elections
In the parliamentary election in North Rhine-Westphalia on May 14, the German Social Democratic Party suffered a major defeat. This is the third consecutive failure of the SPD over the last two months – after the elections in the federal states of Saarland and Schleswig-Holstein.

According to Deutsche Welle, the voting in North Rhine-Westphalia serves as a kind of a general rehearsal of the election in the German Bundestag that is set to take place on September 24.

"The defeat of the Social Democrats in North Rhine-Westphalia and their candidate for Chancellor Martin Schulz is particularly painful. Firstly, because he himself comes from here [this federal state]; secondly, this federal land has always been a mainstay, the main springboard of the SPD, and thirdly, the election here can be viewed as a kind of a general rehearsal [before the big day in September]," Deutsche Welle wrote.

According to Spiegel Online magazine, the victory in North Rhine-Westphalia is a great success for Merkel.

"Merkel has proved it to all them again: to all the naggers and doubters, all the nervous lads from her own ranks, who – after the refugee crisis and the electoral defeats last year – already predicted the Union’s decline. After the CDU triumph in North-Rhine Westphalia, they, too, could see: this Merkel is undefeatable," the magazine wrote.

The CDU is encouraged

"The big goal this year is the victory in the Bundestag election in September, which we want to achieve. So, today we have an occasion to celebrate, but tomorrow we start serious work for the benefit of Germany," Secretary General of the CDU Party Peter Tauber told journalists in Berlin.

Tauber noted that the main reasons behind the victory of the CDU in North Rhine-Westphalia was the strategy demonstrated by the CDU team in the most important areas for the region, such as "internal security, erroneous infrastructure and educational policy."

The issue of internal security has without a doubt become one of the most decisive factors behind the victory of the CDU in the election in North Rhine-Westphalia, given the large number of security incidents that took place over the last several months.

© Flickr / kaffeeeinstein
No Men Allowed: Female-Only Trains Appear in Germany After Cologne Sex Attacks
They include massive sexual attacks on female residents of the city of Cologne by young men of North African and Arab appearance that occurred during a New Year’s Eve celebration. The police received more than 700 applications from women who suffered from sexual harassment and beatings, as well as numerous thefts.

Another scandal that affected the federal state of North Rhine-Westphalia in 2016 was a terrorist attack that took place in Berlin on December 19, when a truck rammed into people at a Christmas market in the center of Berlin, killing 12 people and injuring 48 more.

Sociological surveys conducted by several research institutions showed that security issues were one of the main reasons driving people to cast their votes for Angela Merkel.

According to the Infratest dimap poll, which was published last week, 64 percent of Germans consider the situation in the world to be threat for Germany, and 69 percent agree with the statement that Merkel can ensure the wellbeing of the country in such turbulent times.

Merkel: Germany Not The First One Who Must Expand Capacities in Afghanistan'