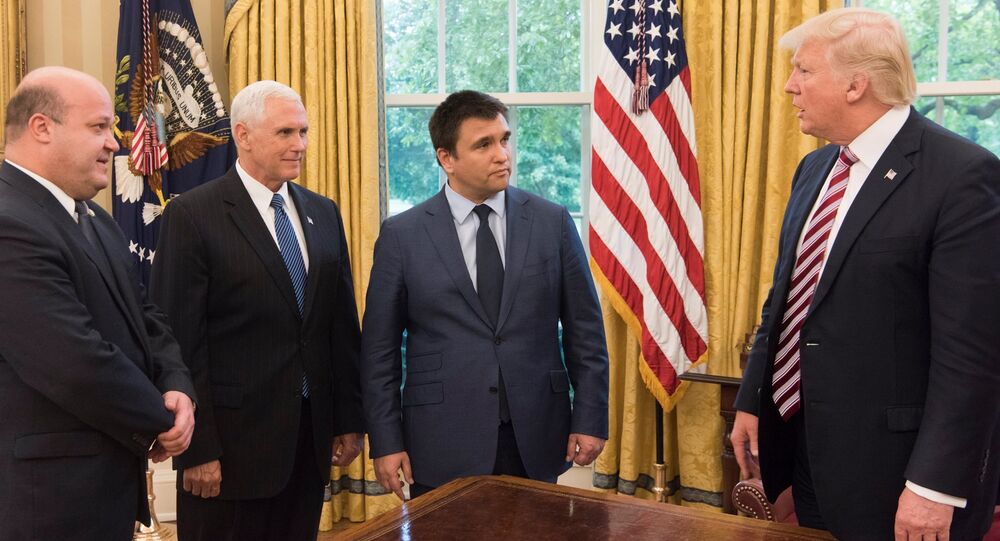 Last week, Ukrainian Foreign Minister Pavlo Klimkin met with senior US leaders, including President Donald Trump and Vice President Mike Pence. Handshakes, smiles and niceties aside, Kiev seems to have been given a clear message: Washington will no longer continue to subsidize the previous administration's Ukrainian project.

On Thursday, Ukraine's foreign minister paid a highly-anticipated visit to the White House, posing for a photo with President Trump and sitting down to speak with Vice President Pence about the situation in the Donbass.

© AP Photo / Evgeniy Maloletka
Mike Pence to Ukrainian FM: Minsk Agreements 'Most Viable Path Towards Peace'
According to a White House press release, Pence told Klimkin that while Washington would continue to offer "unwavering…support for Ukraine's sovereignty and territorial integrity," it also considered "that the Minsk agreements remain the most viable path toward peace."

Under the Minsk deal, signed in February 2015 in the Belarusian capital by the leaders of the Normandy Four negotiation format (Ukraine, Russia, France and Germany) Kiev was obliged to pass constitutional reforms on federalization and the provision of special status to the eastern territories which broke off from Ukrainian control after the February 2014 Maidan coup d'état. The deal stipulated that Kiev should do this by the end of 2015. Over two years have passed, but Kiev has yet to live up to its obligations.

The Ukrainian Embassy in Washington's recap of the foreign minister's meeting stated, among other things, that the two sides "discussed further [US] efforts to support Ukraine."

This was the first time that Klimkin succeeded in getting an audience with President Trump and Vice President Pence. The foreign minister had previously visited Washington in March, but was met only by Secretary of State Rex Tillerson.

Ever since Trump's election, Ukrainian diplomats have been working to arrange a meeting between the president and Ukrainian President Petro Poroshenko. Plans for such a meeting have yet to be announced. Observers speculate that Trump's aversion to Poroshenko comes down to the fact that he and other Ukrainian officials openly sought to sabotage Trump during the election campaign last year.

© Photo : Facebook / Embassy of Ukraine in the USA
Ukrainian Foreign Minister Pavlo Klimkin with US President Donald Trump in the Oval Office

As time passes, Ukrainian leaders have been growing increasing disillusioned over Ukrainian diplomats' efforts to woo the White House. On Friday, Rada MP Andrii Artemenko claimed that Kiev paid lobbyists $400,000 to arrange the meeting with Trump and Pence, which he said lasted only six minutes.

© AP Photo / Sergei Chuzavkov
Ukraine's FM Denies Claims of Payment for Arrangement of Meeting With Trump
Artemenko added that the meeting had not been planned in advance, but was arranged to compensate for the meeting between President Trump and Russian Foreign Minister Sergei Lavrov, which took place a day earlier.

On Friday, Klimkin denied that the Foreign Ministry paid lobbyists for the meeting. "I definitely do not use lobbyists or others for organizing meetings; this is my principle," Klimkin said, speaking at a press briefing.

Nevertheless, whether or not there is any truth behind Artemenko's scandalous claims, analysts have said that it's obvious to just about everyone that Kiev has yet to make any sort of substantive breakthrough with Trump.

Speaking to Radio Sputnik, political scientist and Ukraine expert Oleg Oponko recalled that Kiev has been trying to break through to Washington on several tracks, including the situation in the Donbass.

© REUTERS / Jim Lo Scalzo/Pool
What Stands in the Way of Russia-US Rapprochement Under Trump?
"The idea of including the US in the settlement of the situation in the Donbass has existed for a long time among Ukraine's political elite," the expert explained. "It appeared there at the suggestion of Ukraine's Polish partners, who are also advocating for the expansion of the Minsk format, and who would like to see a general reformatting of the dialogue on Ukraine," he added.

"Over the course of several months now, Foreign Minister Klimkin has been probing the American political elite for its consent to join this process. He has found support from Republican officials, but not from representatives of the Trump administration."

Oponko believes that the Ukrainian chief diplomat's efforts continue to have a low likelihood of success.

"Chances are that Klimkin will not able to achieve any results at this stage, because at the moment there is no readiness among the American political elite to engage in Ukraine's problems, or to support it with something more than what they are doing already. Most likely, Klimkin will receive new arms supplies, and some financial support, but no significant political support," the analyst concluded.

© Photo : RUSSIAN FOREIGN MINISTRY
Kremlin Expresses 'Cautious Optimism' After Lavrov's Talks With Trump and Tillerson
In the meantime, the Trump administration's actions may be speaking louder than words, demonstrating that Washington is not prepared to take Kiev under further under its wing, and on the contrary, is proposing cutbacks.

Last month, US media published next year's draft budget proposals on US foreign aid, showing that Washington may cut financial assistance to Ukraine by nearly 70% (or $570 million) in 2018. Kiev denied that figure, and estimated that the cuts would only amount to about 30% (or $177 million).

Still, even a 30% cut in aid would be a severe blow to Ukraine's economy. It would also demonstrate that whatever the Trump administration's priorities are, they don't seem to include unwavering support for the Obama administration's Ukraine project.

What Stands in the Way of Russia-US Rapprochement Under Trump?