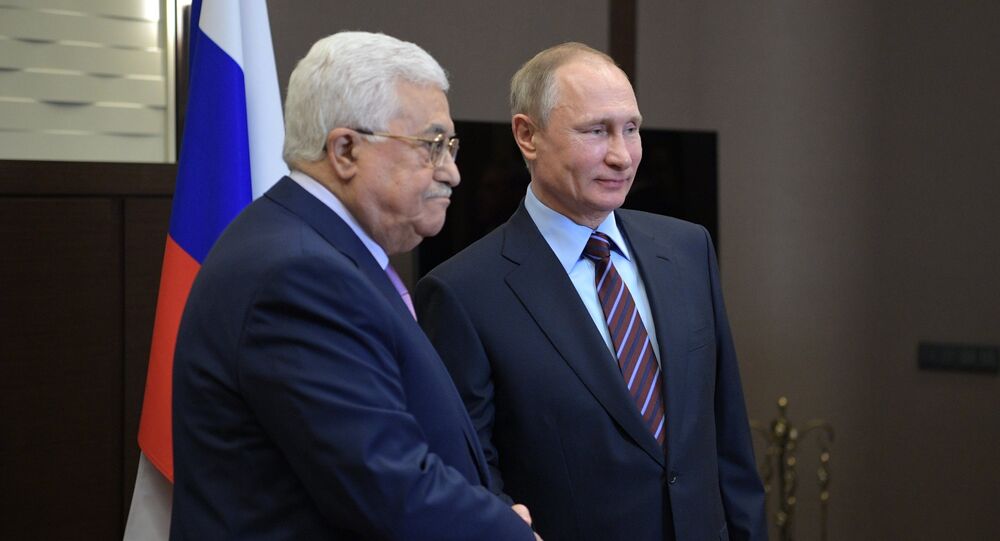 MOSCOW (Sputnik) — The comment comes just days after Palestinian President Mahmoud Abbas held talks with Russian President Vladimir Putin in the Russian resort city of Sochi on Thursday and US leader Donald Trump in Washington on May 3, with both Russian and US presidents expressing their commitment to help Israelis and Palestinians achieve a lasting peace settlement.

"The coordination between Russia and the United States in arranging the meeting between Palestine and Israel is likely and we welcome it as long as it is coordinated in the interest of achieving progress in the peace process and we say it publicly. Russia is very important as well as the United States. Any peace efforts between the Palestinians and the Israelis have to be endorsed and supported by both superpowers," Ziad Abu Amr told Sputnik.

© Sputnik / Alexey Druzhinin
Putin: Peaceful Coexistence of Palestine, Israel Guarantee Middle East Stability
Both Russia and the United States are members of the Middle East Quartet, which strives for revival of the Israeli-Palestinian talks, which are in deadlock since mid-2013.

Putin suggested a meeting of Israel and Palestine in Moscow as early as in 2016, with both sides stating that they supported the idea. However, the meeting has not taken place yet.

On Thursday, Abbas said at a joint press conference with Putin that Palestine welcomed the invitation to hold a trilateral meeting in Moscow with Israeli Prime Minister Benjamin Netanyahu. On Tuesday, the Palestinian president said that his country was ready to meet the Israeli side in the United Sates as well.

© Sputnik / Maksim Blinov
Palestine Ready to Hold Talks With Russia, Israel Anywhere
On May 9, Abbas told the RT broadcaster in an interview that he thought about a sort of political "rapprochement" between Moscow and Washington, and added that Palestine would like to use even a minimal mutual understanding between Russia and the United States in order to solve the Palestinian issue.

Palestine hopes Trump will continue efforts aimed at restoring the Middle East peace process during his upcoming trip to the region later in May, where he is scheduled to visit the Palestinian city of Bethlehem, Israel and Saudi Arabia, the Palestinian deputy prime minister said.

"We expect that during Trump's visit to Bethlehem we will pursue what we have started in the White House with regard to American efforts to revive the peace process in the Middle East," Ziad Abu Amr said.

Trump has decided to visit the city of Bethlehem in Palestine on May 23 as part of his first foreign trip to the Middle East. Trump stressed that comprehensive peace could only be attained through direct talks between Israelis and Palestinians.

"He is expected to visit Saudi Arabia and Israel so it is only natural to visit Palestine. He is scheduled to visit Bethlehem on May 23. It also comes as a follow up to President Abbas visit to Washington earlier this month," the official said.