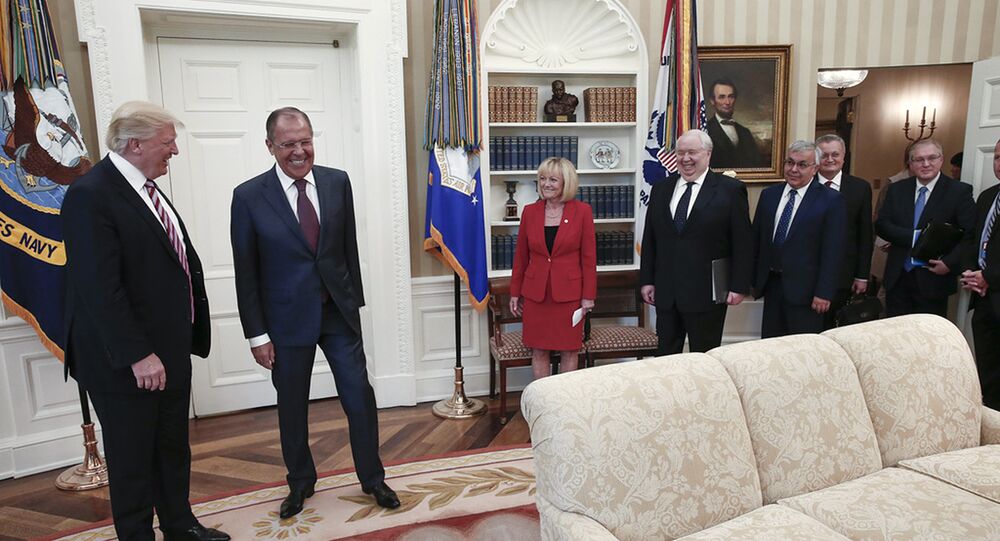 The Russian TASS state news agency on Thursday expressed astonishment over reaction of the US media to the publication of photos of the meeting between US President Donald Trump and Russian Foreign Minister Sergey Lavrov.

MOSCOW (Sputnik) — Trump and Lavrov met in Washington on Wednesday, with only two photographers, one from each side, present at the meeting, as the general press was denied an accreditation for the event. The Russian photojournalist was a TASS employee, who regularly serves as Lavrov's personal photographer.

The Russian Foreign Ministry and TASS published photos from the meeting later in the day, while the US side released no official photos, which triggered hysteria in the US media. Some US media outlets refused to publish the photos of Trump and Lavrov made by the Russian photographer, while the others stressed that they had to use them as US journalists were denied access.

© Photo : RUSSIAN FOREIGN MINISTRY
US 'Scared' of Photos Made at Lavrov, Trump Meeting - Sputnik Editor-in-Chief
"TASS photographer Alexander Shcherbak is a staff photographer of the TASS agency, and regularly accompanies Russian Foreign Minister Sergey Lavrov during his foreign visits, also carrying out functions of the personal photographer of the head of the foreign ministry. The Russian Foreign Ministry informed the US side even before the visit that the functions of minister's personal photographer would be carried out by TASS photographer Alexander Shcherbak," the agency said in a statement.

TASS added that the shooting format was agreed on with Washington, adding that no restrictions on publishing of photos were made. The news agency reminded that a US photographer also attended the meeting.

"It should be noted that TASS, like all other media outlets, regularly uses the materials published by media from the United States and other countries. The foreign media materials are not only used for illustrating events, which took place in foreign countries but Russian events as well. However, TASS never draws the attention of readers to the fact it used materials of foreign media outlets in covering the event," the agency said.

The TASS photographer himself called on the US colleagues "not to lose a sense of professional dignity," adding that he had been working in this field for many years and faced such "absurd accusations" for the first time.

Trump, Lavrov May Meet in Washington on Wednesday - Reports

Russia Takes Into Account Trump's Statements in Dialogue With US - Lavrov