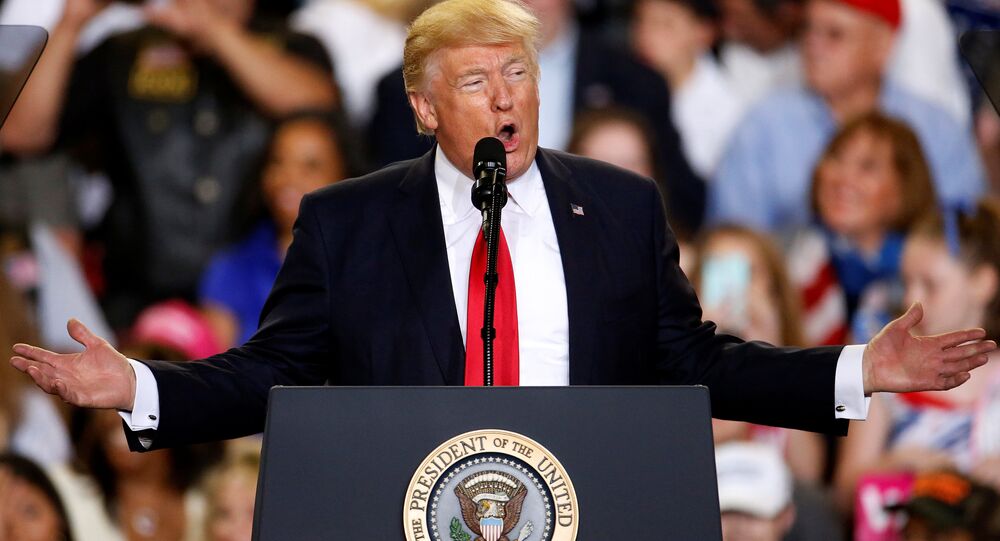 Take a shot of vodka and relax, maybe, Ted?

​Lieu, in a heroic response to the political tempest, has urged FBI personnel to “stand strong,” while diving into his role as fanner of the flames of Russophobic hysteria.

“Our 11 year old just asked me if President Trump was part Russian. That would be really funny if it wasn’t so really scary,” Lieu tweeted on Wednesday.

​The representative for parts of Los Angeles might have been wiser to stick with his adult judgement instead of demonizing people from another country.

​In fairness to Lieu, his argument seems to be that if Trump had Russian family heritage, his duties as president of the United States would be compromised.

That sounds awfully familiar. In 2016, during the campaign, Trump said Indiana Judge Gonzalo Curiel was ill-equipped to do his job because of his Mexican lineage, even though the magistrate was born in the US.

​At the time, Lieu commented to a fellow a Twitter user facetiously: “Um, you also believe a federal judge born in Indiana can’t be fair because he is ‘Mexican?’”

​Lieu also slammed Trump’s accusation, saying that denying the judge’s ability to fulfill duties as a public servant because “he is ‘Mexican’ … is a racist statement and view.”

So let’s get this straight: Lieu said judging a person’s ability to be fair in their job based on heritage is “racist.” But in saying Trump would be compromised by his own hypothetical Russian heritage, now that’s an example of the esteemed congressman abiding by his principles of integrity, honor, duty and country.

But the congressman didn’t stop there.

“Firing Comey when he was out of town w/ no notice suggests there is something big that [the president] did not want him to do or reveal,” Lieu speculated, deploying the hashtag #Watergate.

​Next Lieu offered a dose of #WednesdayWisdom, in which he proposed Congress “halt & resist any major trump agenda item” until the probe into supposed links between Trump associates and Russian operatives is complete.

​Leiu doesn’t rank very highly in fulfilling the one mission he has been elected to do. He hasn’t introduced any major noteworthy piece of legislation, so perhaps not much will change if he acts to “resist” legislation from Trump. Some Trump proposals might actually be favored by a lot of Democrats, like revamping public investment in infrastructure and re-introducing a rule that banking institutions cannot use consumer deposits to finance risky, speculative bets on obscure financial instruments.

Lawmakers are sent to Washington to do one thing: introduce, debate and vote on legislation. An acute case of Russian hysteria hardly gives Lieu permission to abdicate his duty to his constituents.

Further, Congressman Lieu openly advocated for government employees to ramp up the leakfest that’s been coming out of the White House. “Today is a good day to remind people that if you are a whistleblower, read my website on how to leak to the press,” Lieu publicized to his 186,000 followers, including a link to a “how-to” guide for sharing “key information,” dated February 16.

​Editor of the conservative Drudge Report website, Matt Drudge, tweeted Wednesday that his editorial team did not receive any “damaging” leaks from the Obama White House over the course of 8 years. Since January 20, however, such damaging leaks have been sent to the news outlet “hourly.”

Lieu’s confusion about his own policy prescriptions is mind-boggling to the point of the absurd: Following revelations about the CIA’s arsenal of hacking tools, Lieu blasted the leak, stating on March 10, “the ramifications could be devastating. We need to know if the CIA lost control of its hacking tools, who may have these tools.”

Right, so one month after publishing a how-to guide for exposing the inner workings of government, Lieu was stunned that CIA documents could have possibly have made their way into public view. The Stanford-trained computer scientist was “deeply disturbed” secret documents were published on WikiLeaks, according to a statement.

He didn’t condemn the CIA’s ability to conduct basically any surveillance on Americans it wants, including snooping on emails, listening to conversations through Samsung TVs and aggregating cellphone call data.

Icing on the cake?

Russia Provides Humanitarian Aid to Over 1,500 Syrians in Aleppo