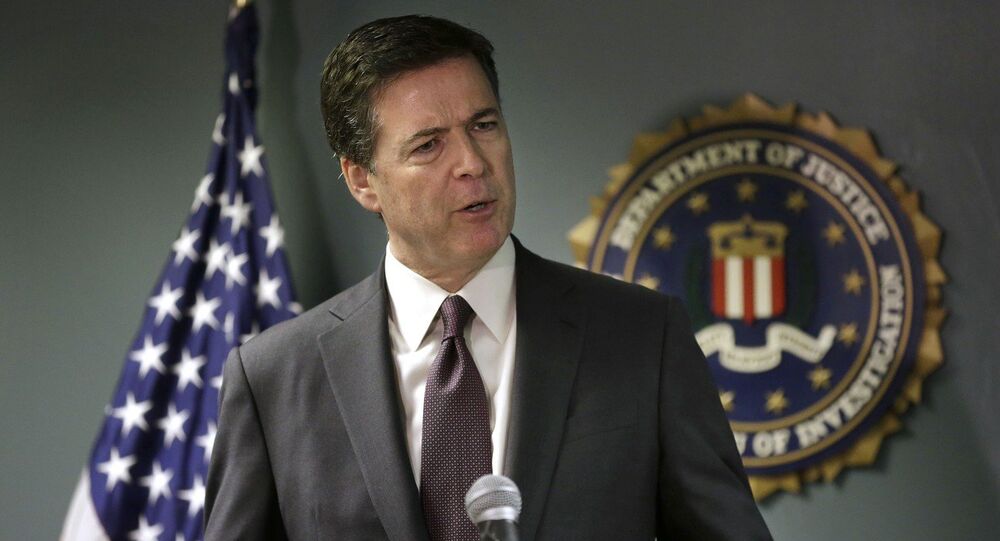 US President Donald Trump's decision to fire FBI Director James Comey has sparked a heated debate. Speaking to RIA Novosti political scientist Boris Mezhuyev noted that the timing of Trump's move wasn't quite good. For her part, Dr. Jeanne Zaino assumed that Comey's resignation would likely turn into a political nightmare for the US President.

Comey's dismissal came days after he testified about Clinton's use of a private email server during her tenure as Secretary of State and the probe into the alleged Russian interference in the US presidential elections.

"Dear Director Comey, I have received the attached letters from the Attorney General and Deputy Attorney General recommending your dismissal as the Director of the Federal Bureau of Investigation. I have accepted their recommendation and you are hereby terminated and removed from office, effective immediately," Trump's letter says.

Just a few days before Trump sacked Comey, Jennifer Rubin, an opinion writer for The Washington Post, highlighted that neither Republicans nor Democrats really trusted the FBI Director.

"FBI Director James B. Comey's testimony before the Senate Judiciary Committee on Wednesday underscored his status as a political Rorschach test, trusted by neither side for entirely different reasons," she wrote.

On the one hand, to the displeasure of the Republican camp, Comey had been investigating Trump's alleged "ties with Russia"; on the other hand, it was he who, according to Hillary Clinton, had dealt a heavy blow to her campaign by announcing on October 28, 2016, that he renewed the probe into her much discussed email case.

The Democrats have said some of the worst things about James Comey, including the fact that he should be fired, but now they play so sad!

​According to Mezhuyev, Comey's dismissal looks rather controversial.

"Now all eyes of the US media are turned to this story, which looks, to put it mildly, rather strange. Virtually no one believes that James Comey was removed because he behaved rudely towards Hillary Clinton: nobody takes this seriously. Obviously, the main reason is Comey's disloyalty to Trump, in matters related to the investigation of his 'Russia ties','" Mezhuyev told RIA Novosti.

"I think that the coverage of this meeting in the media could have been much more favorable if this resignation had taken place some other day — earlier, or even after this important and necessary summit," the Russian political scientist underscored, adding, however, that Trump's decision to fire Comey won't seriously affect the talks.

"I had a feeling that certain people who hope to ease Russian-American tensions have pinned their hopes on today's meeting. The fact that [Comey's dismissal] happened practically on the same day is not entirely satisfactory," he noted.

Echoing Mezhuyev, she emphasized that the former FBI director's dismissal has nothing to do with the Clinton email case.

"What seems to have happened is that the president has been frustrated in the last week or two by the ramping up… of the investigation into 'Russian collusion'… So that seems to have led to the firing and that is a political nightmare for President [Trump]," she emphasized.

The crux of the matter is that having become a private citizen Comey may shed light on Trump's case.

She cited the second paragraph from Trump's letter to Comey, which says that the ex-FBI director informed Trump "on three separate occasions" that the latter was "not under investigation."

"Unfortunately for President [Trump] what he has done with this firing is that he has made Comey a private citizen who is very capable and able now of answering questions from the press or Senate investigators and others about whether in fact Trump is under investigation and whether he said that three times to the president," Zaino pointed out.

According to the American political analyst, by removing Comey, Trump has opened Pandora's box and the consequences of that are hard to predict.

Russian officials have repeatedly denied allegations of interfering in US presidential elections. The Kremlin regards the charges as an absurd attempt to distract the US public from revelations regarding America's pressing domestic concerns.