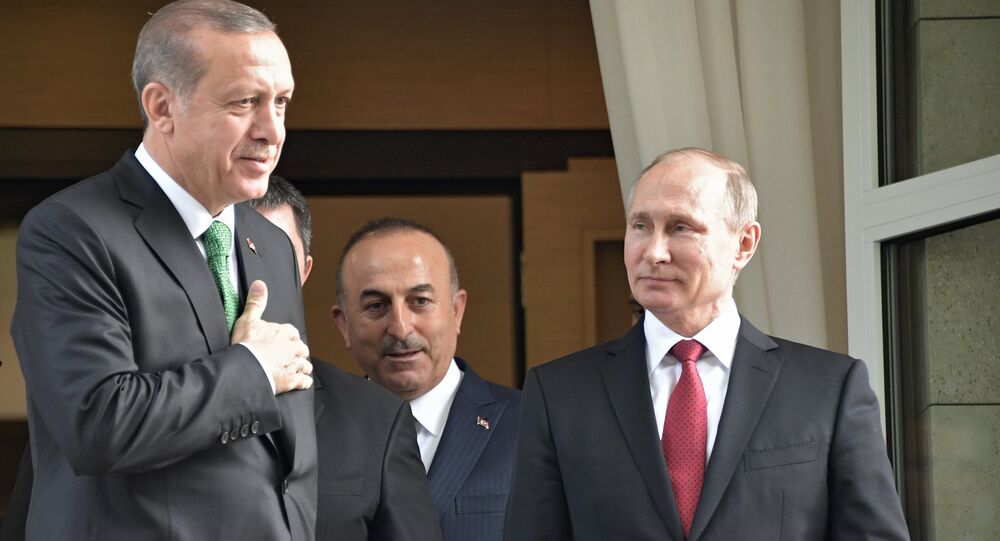 In the follow up to the bilateral meeting between the Russian and Turkish Presidents in Sochi, and ahead of Erdogan's trip to the US later in May, Sputnik discussed the outcome of the negotiations with Turkish political analysts. They said that the results clearly show that Turkey has more points of contact with Russia than it has with the US.

© Sputnik / Sergey Guneev
Turkey Up for Bid Between Putin and Trump? Why Erdogan Came to Sochi
"The meeting between the presidents was very important in terms of restoring Turkish-Russian relations, which have noticeably deteriorated after Turkish comments on the chemical attacks in Syria. Russia was firm that it was a provocation and urged the international organization to launch an investigation into the incident, and it is the right position. Turkey however joined the Western countries in accusing the Syrian government," Turkish political analyst   Hasan Unal, the head of the International Relations Department at the Ankara-based Atilim University told Sputnik Turkiye.

The results of the Sochi talks, he said, show that the two countries are on the way to reaching a consensus on this particular issue. The agreements reached during this meeting could prevent any repeated collapse in the relationship between the two countries over the Syrian issue.

He also commented on the decision to set up so-called "de-escalation zones" in Syria, calling it the right and appropriate decision for the country's security and territorial integrity. Syria's territorial integrity, he said, is of primary importance to Turkey, however there are a number of issues in Ankara's policy on Syria which contradict with this principle.

"If we are calling for the territorial integrity of Syria, let's cooperate with the legitimate Syrian government. Such cooperation is needed for the Syrian government to be able to defend the sovereignty of the Syrian territories. Until we start cooperating, Syria will remain divided and split," he told Sputnik.

© REUTERS / Bassam Khabieh
Signs of a Bargain? Why Russia is for the Establishment of 'Safe Zones' in Syria
Meanwhile, he said, Turkey is busy with securing the ceasefire in the country, which also means the further cementing of Syria's divided status. The further peace treaty will be based on this divided status, he suggested. And this is dangerous as Syria will then become a federation, however no federation will be able to exist in the Middle East.

Hence while Turkey's insistence in advocating Syria's territorial integrity is natural, it is important that Turkey should take into account the interests of the Syrian state.

He also commented on Turkish-US relations noting that chances are low for a long-term in-depth cooperation between the two countries given the differences of their stances on a number of issues and the US' support of the Kurdish Democratic Union Party (PYD).

"Taking the above into account, we could easily say that there is harmony in relations between Turkey and Russia with regards to their Middle Eastern policies, and Syria in particular and the strive for a compromise as Russia does not want to split Syria and is not calling for the setup of a Kurdish state in the region," Hasan Unal told Sputnik.

Serhat Erkmen, a Turkish political analyst and director of the Center for Middle Eastern studies at the 21st Century has a similar view on the issue. He said that Turkey has more points of contact with Russia than it has with the US.

"Turkey and Russia share a similar view on Syria, unlike the US. We can't say that the events not far from the city of Afrin did not have any impact on Turkish-American relations. It seriously hurt Turkey. Especially after the operation in Sinjar where the US military cooperated with the Kurdistan workers party (PKK), which came as a real blow to Turkey," he told Sputnik.