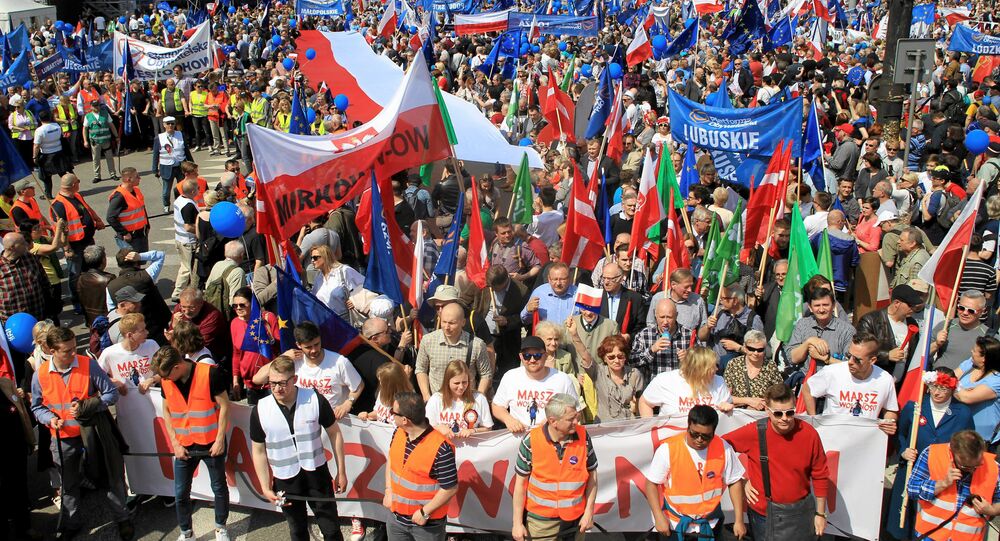 'March of Freedom': Up to 10,000 Participating in Opposition Rally in Warsaw

Up to 10,000 people have gathered in the Polish capital on Saturday to participate in a rally organized by the country's largest opposition party Civic Platform (PO) and some other parties and movements, a Sputnik correspondent reported.

WARSAW (Sputnik) — According to the organizers, the rally, dubbed the March of Freedom, is held to emphasize the country's adherence to the European values and to oppose the activities of Poland's ruling Law and Justice (PiS) party that allegedly violates these values.

© Sputnik / Alexander Vilf
About 1,000 People Participating in Opposition Rally in Moscow
After singing the country's anthem, the protesters started marching from Warsaw's Bank Square to the Constitution Square, carrying the flags of both Poland and the European Union, as well as banners criticizing the PiS and its leader Jaroslaw Kaczynski.

The rally has already been criticized by the PiS officials. Kaczynski said that no one could put into question the existence of freedom in the European country, adding that the march was a provocation. At the same time PiS spokeswoman Beata Mazurek said that the opposition had decided to hold a rally and to criticize the ruling party instead of proposing specific measures to improve the life in Poland.

The PO has repeatedly slammed the PiS due to a number of political steps, such as the reform of the Constitutional Court and the party's opposition to support former Polish Prime Minister Donald Tusk during his recent re-election as the European Council president.

Business as Usual: Poland Seeks to Ramp Up Political Pressure Against Russia