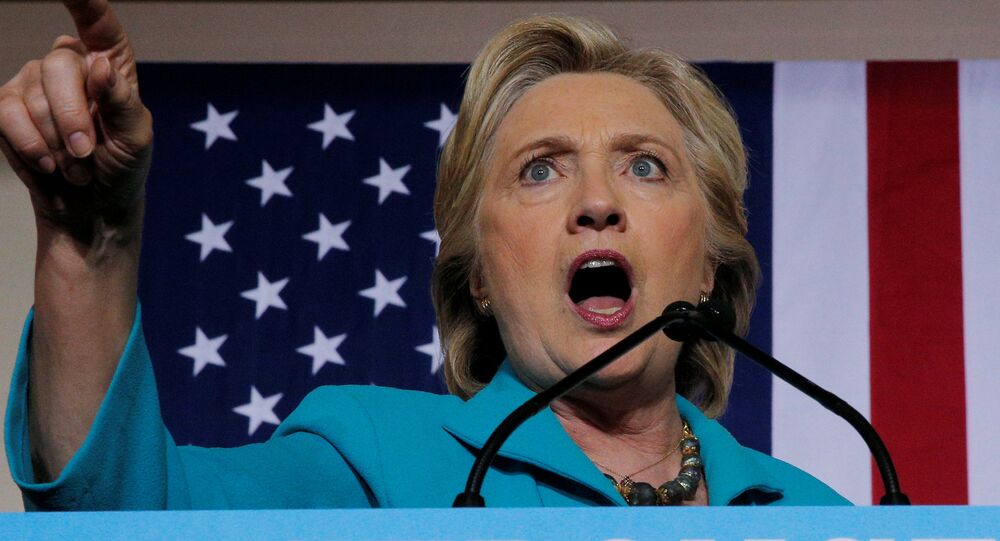 Former Democratic presidential nominee Hillary Clinton is reportedly busy creating a new group specifically aimed at funding organizations which will throw sand in the gears of Donald Trump and his Republican fellowmen.

It appears that former Democratic presidential hopeful Hillary Clinton is serious about returning to politics.

According to Politico, Clinton is building "a new political group" to counter her political rival, Donald Trump.

"The former secretary of state is building a new political group to fund organizations working on the resistance to President Donald Trump's agenda, spending recent weeks in Washington, New York City, and Chappaqua, N.Y., meeting with donors and potential groups to invest in, and recruiting individuals for the group's board of directors," Politico wrote Friday citing multiple sources with the knowledge of the matter.

© AP Photo / Pablo Martinez Monsivais
House of Cards: Is Assange Right About Hillary Clinton's Plot Against Trump?
It is expected that she will launch the new group called Onward Together as early as next week, the media outlet noted, adding that Clinton's spokesman refused to comment on the issue.

The rumors of Clinton's political comeback have been circulating in mainstream media since the beginning of the year.

"I'm certain Trump will screw up enough that by the fall of '18, Hillary's numbers will be way up again," former Pennsylvania governor and DNC chair Ed Rendell told Politico just a few days after Trump's inauguration.

Curiously enough, in mid-March WikiLeaks' editor-in-chief, Julian Assange tweeted that the former Democratic presidential nominee is harboring plans to oust Trump from the Oval Office by replacing him with US Vice President Mike Pence.

​"Clinton stated privately this month that she is quietly pushing for a Pence takeover. She stated that Pence is predictable hence defeatable," Assange tweeted.

Speaking to Sputnik in March, Charles Ortel, an investigative journalist and Wall Street analyst, threw the potential scenario into doubt, adding, however, that Trump's political opponents are likely to continue to attack the US President.

© REUTERS / Lucy Nicholson
Why Hillary Clinton Still Can't Stop 'Whining' About Her Defeat
Ortel's prediction has proved right: as Russian journalist Viktor Marakhovsky noted in his recent op-ed for RIA Novosti, a covert "cold civil war" is currently raging on between the Trump administration and the US political and media establishment.

In addition, during her latest interview with CNN host, Christiane Amanpour at a Women for Women International event in New York Hillary Clinton reiterated that it was FBI Director James Comey and the much-discussed "Russian hackers" who deprived her of her victory. According to Clinton, Trump's win was merely incidental.

"If the election had been on October 27, I would be your president," Clinton insisted.

Commenting on the reported creation of the Onward Together group, Cheryl K. Chumley of The Washington Times suggested that it resembles nothing so much as the Clinton Foundation 2.0.

"Hillary Clinton, after a six-month break from public life, is emerging to head up a resistance group, 'Onward Together,' aimed entirely at taking out President Donald Trump's policies and bringing down the Republican agenda. It smells like a watchdogger's dream. Can you say 'Clinton Foundation, deja vu?'," Chumley wrote.

According to the journalist, Clinton is calling her new initiative a "political fundraising outlet."

"The Clinton Foundation was a fundraising operation as well — supposedly, to fund programs that 'improve people's lives around the world,' as the site states. But as oftentimes happens when Clintons meet money, good intentions ran awry," Chumley remarked, adding ironically that watchdoggers should "start their engines" now.

Why Hillary Clinton Still Can't Stop 'Whining' About Her Defeat