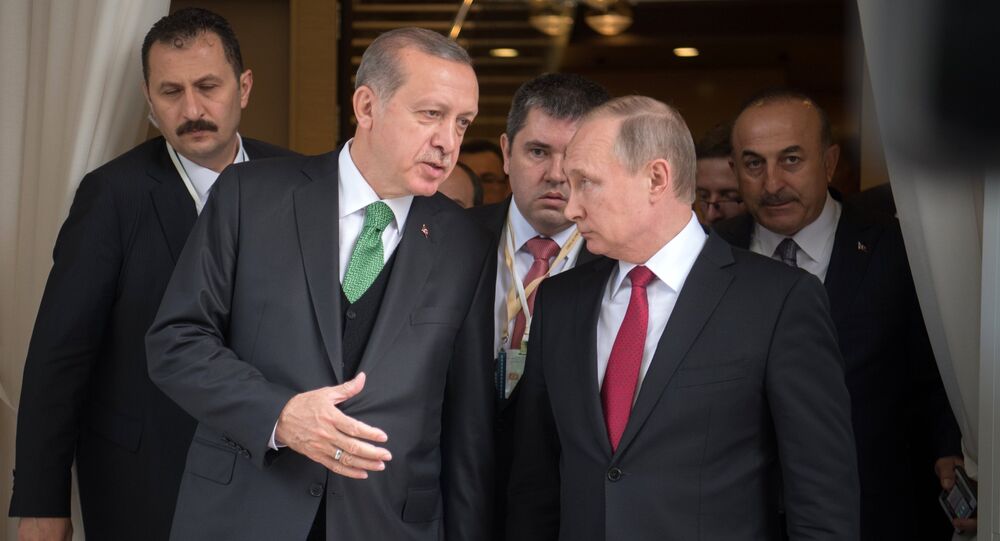 On Wednesday, Turkish President Erdogan came to Sochi for talks with President Putin. Later in May, the Turkish leader is scheduled to visit the US for talks with Donald Trump. Commenting on the results of the negotiations in Russia, political scientist Gevorg Mirzayan suggests that Erdogan has put his country up for bid between Trump and Putin.

"Turkish President Recep Tayyip Erdogan has come to Sochi to ask Putin for concessions in exchange for his loyalty. Moscow however has made it clear that it has no intention of tackling any Turkish problems at the expense of its interests. All the more so, for Erdogan's loyalty, which is nonexistent in nature," Mirzayan, Associate Professor at the Department of Political Sciences of Finance University under the Government of the Russian Federation, writes in his article for Sputnik.

© AP Photo / Alexander Zemlianichenko, Pool
Turkish Delight: Trade Alliance Between Moscow, Ankara is a Win-Win Situation
Russian-Turkish relations have recently been very complicated, he further elaborates, with the recent breach of the Syrian ceasefire by the Turkey-backed opposition, Erdogan's approval of the US air strike on Syria’s Shayrat Airbase and Turkey's ban on Russian agricultural products — mainly wheat, maize (corn) and sunflower oil.

Hence, the purpose of the trip, Mirzayan suggests, was not the simple settlement of these issues, but specification of the further foreign policy course of the new Erdogan's "sultanate" (Ataturk's Constitutional Republic was successfully buried at the April constitutional referendum in Turkey, he says.)

"According to some experts, Erdogan, who is set to travel to the US in two weeks, wants to put Turkey up for bid between Putin and Trump. The one who offers more will get Turkey's favor and support," says the political scientist.

The only problem, he notes, is that this asset is illiquid. Turkey is undoubtedly a very strong, important and active player in the Middle Eastern "playpit". It is Russia's tactical partner. However it is a very unreliable strategic companion.

Erdogan, he says, lacks cohesion and self-possession. He further cites Turkish political and economic commentator Atilla Yeshilada who says that Turkey "has no foreign policy but only one-night stand offers."

Many, he says, explain Erdogan's inconsistency and pertness by solely internal political conditions – everything has been "put at the altar" of the referendum. Erdogan has been flexing his muscles and quarrelling with his partners for the sake of more votes of the Turkish nationalists.

However, he says, Russian political scientists greatly doubt that this is the case.  The constitutional reforms, which have been approved at the referendum, will be implemented only in two years. Until then, Erdogan, who needs to defend his achievements in a constant fight against the opposition, will need to maintain the favor of the nationalists. Besides, his character traits, namely his excessive arrogance, also play a certain role.

Hence there is no sense in making concessions to such a partner, Mirzayan says. And judging by the results of the talks, Ankara seems not to have got any serious concessions, he further suggests.

With regards to the Syrian conflict, he says, the Turks have been interested in three issues: political process, Assad's future and the Kurdish issue.

Regarding President Assad, Moscow's position remains adamant and is not subjected to any changes: the Syrian leader remains the legitimate president of his country and his future can be defined only by his people. In other words, he could be removed only through elections which are only possible after the end of the conflict. Until then, Turkey has to put up and accept this. In fact, Moscow expects Turkey to stick to the position voiced by Prime Minister Binali Yıldırım that Turkey is ready to accept that the Syrian President Bashar Assad may be part of a transitional period in the country.

© AP Photo / Alexander Zemlianichenko, Pool
Putin: Russia, Turkey Agree on Comprehensive Decision to Lift Trade Restrictions
With regards to the political process and political solution to the conflict, including Turkish suggestion on "de-escalation" zones in Syria in order to "cement" a ceasefire in the country, Moscow, he says, has never been against such a suggestion.

Creation of safe zones in Syria will strengthen ceasefire regime, President Putin said on Wednesday after the talks with the Turkish leader.
"Yesterday, we discussed this issue by phone with Mr. Trump. As far as I understand, the US administration supports these ideas," the Russian leader said, adding that Russia has also held preliminary consultations with both Damascus and Tehran on the issue.

"We all believe that mechanisms which would guarantee the halt of bloodshed need to be created. And that would create conditions for the beginning of political dialogue," Putin told the press conference upon completion of the talks.

The issue of the Syrian Kurds however remains the key topic on the agenda, Mirzayan says. Their inclusion into the list of political forces eligible for the country's governance remains of particular concern to Ankara. The political scientist cites former Turkish diplomat and former Turkish Consul General in Erbil Aydın Selcen, who says that unlike the US and the EU, Russia has not even recognized the Kurdistan Workers' Party (PKK) as a terrorist organization.

© Photo : AKKUYU NÜKLEER A.Ş.
Putin: Russia to Invest $22Bln in Construction of Turkey's Akkuyu NPP
Besides, the former diplomat said, Russia has deployed its troops in the Kurdish Canton of Afrin in the north-west of Syria, which announced of its desire to cooperate with Assad in exchange for his protection against the Turks and Turkey-backed Syrian militants.

"From all appearances, Kremlin regards the Kurds as somewhat of a balance to Turkey, as Moscow is not sure of the reliability of its Turkish partners, and has no intention of giving up this asset in exchange for Turkey's favor. Has Turkey accepted Kremlin's position and has it agreed with it?" Mirzayan wondered.

He further noted that the talks between Putin and Erdogan took place at the same time as a new round of the Syrian talks kicked off in Astana, with the Turkey-backed Syrian opposition also taking part in it.

"The results of these talks and, what is the most important, the speed of the implementation of these results, will provide a full answer to this question," he said.

Kremlin, however is ready to constructively discuss with Ankara those strategic issues which bring no damage to Russian interests, the political scientist says.

© Sputnik / Bolat Shayhinov
Another Path Toward Peace: Astana Talks on Syrian Reconciliation
Among those, for example, is the construction of the Akkuyu nuclear power plant in Turkey, where Russia is ready to invest $22 billion or the deliveries of Russia's advanced S-400 missile defense systems.

"If Ankara is ready to pay for this project, Moscow is ready to help its Turkish partners to demonstrate their independence from the American military and industrial complex," Mirzayan said.

He further wondered if Erdogan hoped for more from Moscow. Absolutely, he said, however it is highly unlikely that Trump is going to offer more. The talks with Trump, he suggested, will be more complicated, with even less concessions.

The US and Turkey, he said, are NATO allies, however there are too many discrepancies between them in the Middle East. Trump won't step up his activities against President Assad nor will he give up  the Syrian Kurds, the only force which can be the US' ally in the region.

"If the US is able to set up the Kurdish autonomy in Syria, which will be under its control, it will be a perfect leverage to exert pressure on Turkey, Syria and Iran. And the President-businessman won't leave it as a gift to the President-sultan," the political analyst said.

© REUTERS / Murat Cetinmuhurdar/Presidential Palace
Erdogan Hopes Talks With Putin, Trump to Launch New Era in Syria, Iraq
Besides, he suggested, Trump has no intention of extraditing Fethullah Gülen, the US-based Turkish cleric, whom Ankara accuses of instigating the failed coup in summer of 2016.

"According to a certain data, Gülen has been closely and fruitfully cooperating with the American intelligence community, which Trump urgently needs to establish relations with," Mirzayan said.

Hence, he concludes, from all appearances, Ankara will be forced to accept the Russian bid at the auction of the Turkish future, without any serious concessions from the Kremlin.