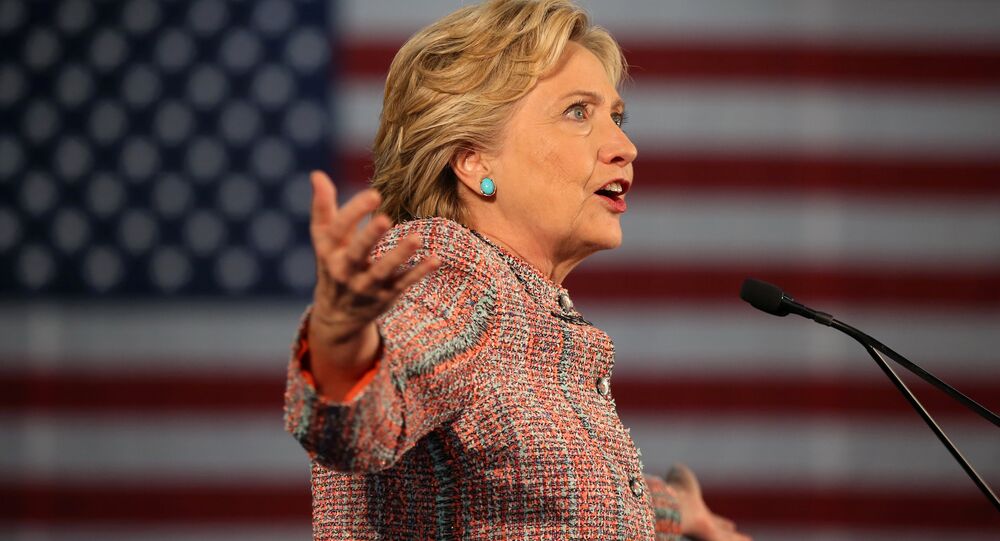 Why Hillary Clinton Still Can't Stop 'Whining' About Her Defeat

Hillary Clinton continues to push ahead with the story that Donald Trump's victory was purely incidental. Speaking to Radio Sputnik, Russian political analyst Mikhail Sinelnikov-Orishak explained what really lies at the root of Clinton's narrative.

It appears that former Democratic presidential hopeful Hillary Clinton still cannot reconcile herself to the shocking defeat in the November elections.

"If the election had been on October 27, I would be your president," Clinton told CNN host Christiane Amanpour at a Women for Women International event in New York.

© REUTERS / Carlos Barria
'Root of All Evil': Reasons Behind Hillary Clinton's Defeat
"I was on the way to winning until the combination of Jim Comey's letter on October 28 and Russian WikiLeaks raised doubts in the minds of people who were inclined to vote for me but got scared off — and the evidence for that intervening event is, I think, compelling [and] persuasive," she added.

Indeed, following Clinton's electoral defeat some observers speculated that the FBI stepping in on October 28, 2016, with its renewed investigation of Clinton's emails had dealt a heavy blow to her campaign.

Even though FBI Director James Comey had announced on November 6 that the second round of the investigation "hadn't turned up anything," the damage was already done.

However, US President Donald Trump does not share Clinton's views on what had happened to her campaign.

"FBI Director Comey was the best thing that ever happened to Hillary Clinton in that he gave her a free pass for many bad deeds! The phony… Trump/Russia story was an excuse used by the Democrats as justification for losing the election. Perhaps Trump just ran a great campaign?" the US president tweeted in response.

Commenting on the issue, Russian political analyst and expert in American studies Mikhail Sinelnikov-Orishak told Radio Sputnik that one shouldn't be surprised of Clinton's unceasing attempt to justify herself.

According to the political analyst, Hillary Clinton has clung to her "Russian hacking" narrative and is unlikely to give it up.

"She might have persuaded herself [that it is true]… and she will continue to talk about it, she is going to write a book about it," he said.

However, Sinelnikov-Orishak expressed confidence that Clinton would not have won even if the elections had been held on October 27, 2016.

"As for the reasons [behind Clinton's defeat], I think there are two of them," the political analyst pointed out. "The first reason is that the tendency towards the victory of the Republicans had been increasing since the days of [Barack] Obama. And the second reason is the unfavorable rating. They [Americans] liked neither Donald Trump nor Hillary Clinton, but Clinton's 'anti-rating' turned out to be higher. And even now they [Americans] would not have voted for her: an unfavorable rating is such a thing that can't fade away soon. And then [during the November elections], despite her belief, Clinton did not have many chances to win," Sinelnikov-Orishak told Radio Sputnik.

© AP Photo / Pablo Martinez Monsivais
House of Cards: Is Assange Right About Hillary Clinton's Plot Against Trump?
According to the political analyst, Clinton "will continue to work on the next election."

"Therefore she needs to demonstrate that the victory won by the Republicans was purely incidental. Of course, no one will miss a chance to exploit the 'Russian hackers' issue; this topic will be further circulated," Sinelnikov-Orishak assumed.

"Usually, the winners do not talk much about their victory, but the losers are constantly whining," he added.

The issue of Russia's "meddling" in US elections has become the centerpiece of the US establishment's anti-Trump campaign. However, the US intelligence community has not yet presented any credible evidence to back their claims.

Meanwhile, WikiLeak's disclosure of the CIA's hacking techniques has yet again thrown the "Russian hacking" story into doubt.

During the recent press conference dedicated to the summit between the Russian and German leaders, Russian President Vladimir Putin underscored that Russia "has never interfered in other countries' political processes."

"These are unsubstantiated rumors used in the internal political struggle," Putin stressed.

The 2016 US presidential elections were followed by allegations from the Obama administration that Russia may have meddled in the elections. In January 2017 the US Intelligence Community issued a report suggesting that such interference took place, but failed to provide any credible proof.

Moscow has repeatedly denounced the allegations.