© Sputnik / Vladimir Astapkovich
Merkel's Visit to Russia: German Chancellor Braces For a 'Recon Mission'
Russian President Putin started the presser by announcing that he had discussed with German Chancellor Merkel the preparation for G20 summit as well as Syria and Ukraine.

"We discussed international problems, including the Syrian crisis and the situation in Ukraine," Putin said, adding that the meeting also touched upon preparations for the G20 summit.

The Russian president also said Russia seeks to build relations with Germany on the principles of mutual benefit, respect and equality.

"The situation in Ukraine remains a source of serious concern," Putin pointed out, adding that during today's talks, the two leaders "confirmed the need for the implementation of Minsk agreements by all sides."

Putin also revealed that he discussed the issue of Syrian conflict with Merkel, and both leaders agreed that there is a need for a more active talks process.

"We decisively condemn any use of chemical [weapons]," Putin reiterated, saying that both sides agreed on the need for a full investigation of the attack on Syria's Khan Sheikhoun chemical incident.

"Those guilty must be found and punished," Putin told a news conference after talks with German Chancellor Angela Merkel held in Russia's Black Sea resort of Sochi. "But this can be only done after an impartial investigation." 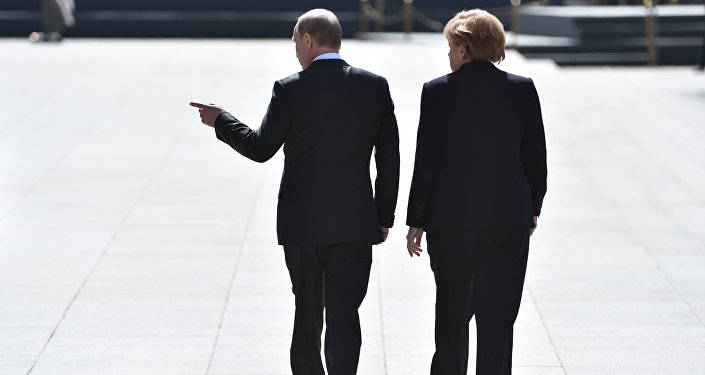 © AFP 2019 / Kirill Kudryavtsev
How Merkel's Meeting With Putin Fits Into 'Germany's Foreign Policy Ambitions'
"Syria conflict could be resolved only through negotiations," Putin concluded after talks with Merkel.

Merkel then took the floor, addressing the issue of anti-Russia sanctions: "Russia is a constructive partner, but the sanctions could be lifted only after the Minsk agreements are fully implemented."

Merkel said that she had expressed support for a truce in Syria and readiness to cooperate with Russia in the fight against terrorism.

"We also discussed the situation in Syria. As the federal chancellor, I noted that we wanted to do everything in our power to support the ceasefire, the cessation of hostilities to help people <…> I think afterward we could also discuss the situation in Libya. We are united in what concerns the fight against international terrorism. Russia and Germany could cooperate even more closely here," she told a press conference after the meeting with Putin.

When asked by a reporter about the possibility of a new agreement on the Ukraine conflict settlement, Merkel firmly said she is against that.

"We can not think up anything else and we do not have to invent anything other than the Norman format and the Minsk accords, since it is impossible to build new plans without achieving basic results in terms of what we have outlined in previous years," Putin said at a news conference after talks with German Chancellor Angela Merkel in Russia's Black Sea resort of Sochi.

Putin responded by saying that it is impossible to form up new plans while the existing ones have still not been implemented. He then reminded that "no one had separated Donbass from Ukraine" as it was the Ukrainian authorities that achieved that by imposing a blockade.

According to Putin, the Normandy four format is working, but the conflicting sides in Ukraine should pursue direct dialogue.

"The Normandy Four should continue to actively deal with the settlement of the Ukrainian crisis. That is, work in this format will continue after the presidential elections in France, as we have agreed on in the latest phone talks," the Russian president added.

© Photo : PIxabay
Washington’s ‘Highly Respected’ Cyber Investigator Tied ‘Russian Hacking’ to an Event that Never Happened
When asked by a reported about Russia's alleged influence on foreign elections, Putin stated that Russia "has never interfered in other countries' political processes": "These are unsubstantiated rumors used in internal political struggle."

The 2016 US presidential elections were followed by allegations from the outgoing US administration that Russia may have meddled in the elections. In January, the US Intelligence Community presented a report claiming that such interference took place, but without proof.

Moscow has repeatedly denounced the allegations. In March, Russian Foreign Minister Sergey Lavrov denounced accusations of meddling in the US as "groundless."