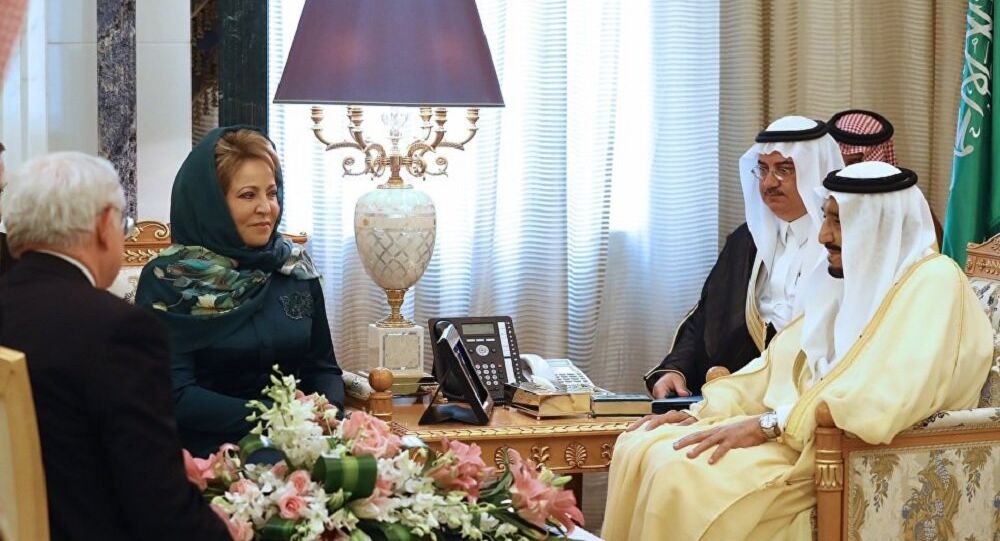 German Chancellor Angela Merkel refused to cover her head during her recent visit to Saudi Arabia. The country has welcomed many female politicians over recent years. Sputnik takes a look at some of the most prominent visits.

In Saudi Arabia, there is a strict dress code for women, but the German Chancellor refused to follow the rules when she met with King Salman bin Abdel Aziz al-Saud.

Merkel did not cover her hair upon arrival in the conservative Islamic kingdom. She was wearing a western suit consisting of brown trousers and a cyan colored blazer.

From #Syria: Thank you Angela #Merkel: Teach the #Saudis that a woman is not a piece of furniture. A woman is a leader. pic.twitter.com/ZogFpOhqbz

British Prime Minister Theresa May also avoided the scarf when she arrived in Riyadh in early April. She said that she hoped to be an inspiration to oppressed women in Saudi Arabia.

Theresa May arrives in Saudi Arabia without headscarf in rejection of strict dress code for women https://t.co/cwNymj57Ms

The kingdom enforces a conservative dress code in public, requiring women to wear a full-length robe and cover their hair. Women cannot leave their homes without a male guardian and are not allowed to drive around the city.

#Michelle_Obama_NotVeiled on her last trip to #SaudiArabia First time I've ever been proud of her. pic.twitter.com/bphacUaXaC

​Angela Merkel called for the burqa to be banned in Germany, saying it was “not acceptable in our country.” “It should be banned, wherever it is legally possible.”

During her visit she also met with Saudi women entrepreneurs. The Chancellor of Germany noted that the country has embarked on a path of change, but so far it is far from equality.

In #Jeddah, #German Chancellor Angela #Merkel met with #Saudi women leaders for talks on advancing the role of women in the Kingdom. pic.twitter.com/P7PQnJLLCw

​Meanwhile, when Russian politician Valentina Matviyenko visited Riyadh in April she took a different approach and opted for covering her head, “out of respect for the local culture.”

“I myself was an ambassador twice so I understand how sensitive this matter can be. Although it is an external expression, it immediately commands respect. Today, a lot of women deputies of the Advisory Council approached me and they especially emphasized this by saying, ‘Thank you for being so respectful of our traditions,’” Matviyenko told journalists when describing her two-day visit to Saudi Arabia.

During her meeting with King Salman bin Abdel Aziz al-Saud, the Russian politician wore a green long dress and covered her hair with a green scarf.

Subtle gestures, such as the choice of attire during an official visit, may point to the fact of how different countries handle diplomacy in a different manner.