Alterations in the Group of Seven (G7) format, including Russia's return to the group, are not discussed at the moment, according to German government spokesman Steffen Seibert.

© AFP 2019 / JOSEPH EID
Oxfam Urges G7 Members to Enhance Efforts to Resolve Syria Conflict
BERLIN (Sputnik) – Alterations in the Group of Seven (G7) format, including Russia's return to the group, are not on the agenda of its current participants, German government spokesman Steffen Seibert said Friday.

"G7 format changing is not discussed at the moment," Seibert told the briefing when asked a corresponding question.

At the same time, Seibert noted that Berlin wanted to involve Moscow in addressing global challenges beyond the framework of the so-called Normandy Four format of talks on the Ukraine crisis settlement, bringing together Russia, France, Germany and Ukraine.

The G7 presently involves Canada, France, Germany, Italy, Japan, the United Kingdom, and the United States. Russia used to be the group's member for 16 years until 2014, when the seven states boycotted the G8 summit in Russia’s Sochi, citing disagreements over the Ukrainian crisis. 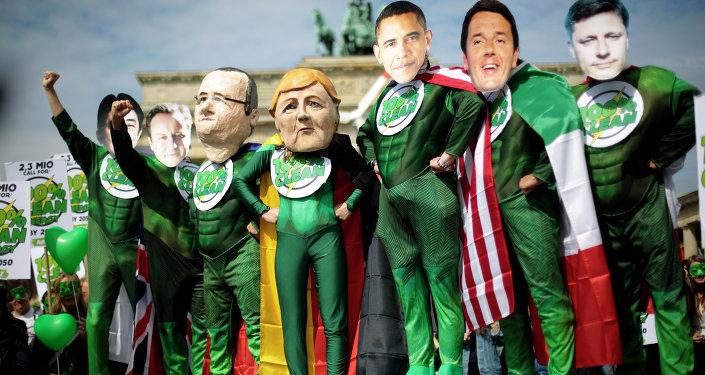 © AP Photo /
G7 Reaches No Agreement on Anti-Russian Sanctions Over Syria
In late December, Russian Foreign Minister Sergey Lavrov said the G8 and G7 formats largely exhausted their international authority, adding that Russia preferred G20 format to discuss the most pressing issues. Lavrov has repeatedly said that Moscow does not intend to make any steps to get back to the G8 group.

The relations between Russia and the Western states deteriorated amid the Ukrainian crisis, as Brussels and Washington put the blame of the eastern Ukraine conflict on Russia and continue to refuse to recognize Crimea’s rejoining Russia as a result of the March 2014 referendum. The United States and the European Union showed their disapproval of Russia’s alleged meddling in the Ukrainian affairs by introducing several rounds of anti-Russia sanctions despite the fact that Moscow has repeatedly refuted the allegations.