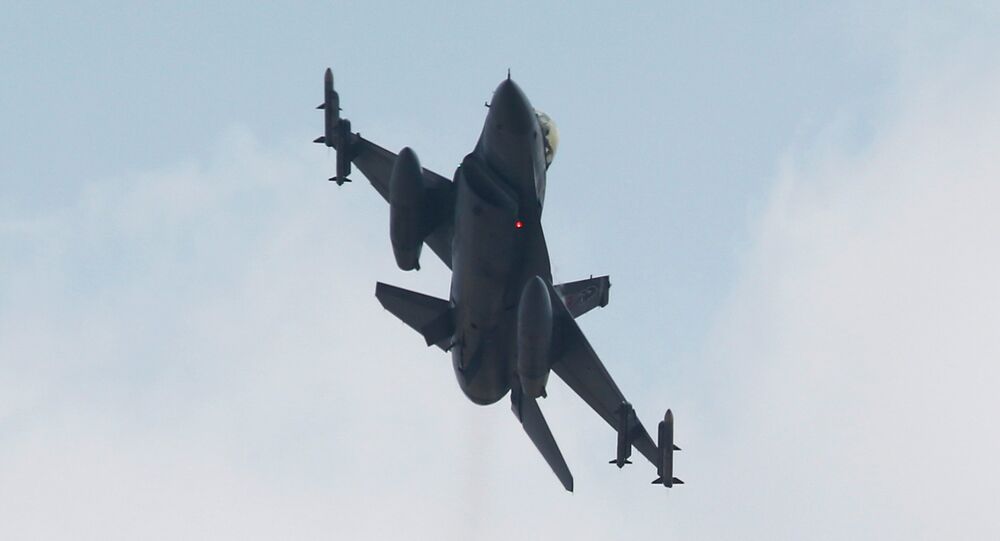 Turkey is likely to continue its fight against the Syrian Kurdish militia and the Kurdistan Workers' Party (PKK) in Iraq, Murat Baybatur of the Justice and Development Party (AK Party) told Sputnik, dubbing the recent attacks a "justified move."

Commenting on Turkish strikes against the positions of the Syrian Kurdish militia and the Kurdistan Workers' Party (PKK) in Iraq, Baybatur characterized the attacks as "a justified move, based on the need to ensure the national security of the country and the region against the terrorist threat."

© REUTERS / Rodi Said
Bloody Message: Turkey's Attacks on Kurds Show It is 'Not Happy' About Kurdish-Russia-US Contacts
The Turkish government designated the PKK as a terrorist organization and views the Syrian Kurdish People's Protection Units (YPG) as the affiliate of the PKK.

The Turkish parliamentarian drew attention to the fact that being located between Iraq, Syria and Turkey — Sinjar is of strategic importance for the PKK.

"Members of the organization's offshoots in Syria and Iraq receive reinforcements from the Sinjar area in the form of weapons, ammunition, and logistical support," Baybatur told Sputnik, "Turkey is ready to give a resolute response to an attack from outside the Turkish border, no matter what terrorist organization, either the PKK or the Daesh, will try to conduct it."

Baybatur emphasized the possibility of the continuation of the operation in Sinjar and northern Syria.

"Currently, the Turkish Armed Forces carrying out necessary preparation steps," he said, "Our armed forces are capable of carrying out ground operations in the Sinjar area similar to those we conducted in the [northern Syria] region up to al-Bab in order to clear the north of Syria from Daesh and PKK. At the current phase of the air operation, attacks are being launched at the terrorists' locations. And if a ground operation is required in the future, the Turkish Armed Forces will take this step."

© REUTERS / Rodi Said
Actions Like Turkish Syria, Iraq Campaign Influence Regional Situation Negatively - Moscow
However, it appears that the Iraqi Ministry of Foreign Affairs does not share Ankara's enthusiasm. On Tuesday it strongly condemned the Turkish airstrike in Sinjar, northern Iraq, calling it an act of aggression.

"Ministry of Foreign Affairs expresses rejection and outrage at the Turkish aggression in Sinjar, northern Iraq. This aggression is a flagrant violation of all international conventions and treaties, and incompatible with the principles of good-neighbourliness," the Iraqi Foreign Ministry's official statement said.

"It represents a violation of Iraq's sovereignty and reflects an unacceptable policy that cannot be tolerated," the statement added, calling upon the international community to put Turkey on a leash.

Still, according to Baybatur, the recent attack can't be seen as a violation of sovereignty.

"This is not an attack on Iraq's sovereignty, quite the contrary, it is [Turkey's] assistance to Iraq," the Turkish politician insisted, "The operation is carried out in order to clear Iraqi territory from terrorist organizations operating in the region. If we consider the issue of Iraq's sovereignty in this context, then the Iraqi leadership needs to make efforts to prevent the terrorist organizations acting on its territory from attacking neighboring countries."

© AP Photo / Anatolia, Kenan Gurbuz
Turkey Notified US, Russia 2 Hours Ahead of Airstrikes on Kurds in Syria, Iraq
Speaking to Sputnik, Baybatur argued that if the Iraqi government of Iraq had managed to expel "the terrorist elements" from the region, "Turkey would not have to conduct the operation."

"If Iraq is unable to cope with the problem, then we must bring an end to the terror threat because it is directly related to ensuring Turkey's national security. So, in this situation Turkey is assisting the Iraqi government in the fight against terrorists located on Iraqi territory," the Turkish politician said, referring to the fact that previously the Iraqi Kurdistan leadership called upon the PKK to withdraw from Sinjar.

Meanwhile, Washington voiced its deep concerns over Turkey conducting military action in Syria and Iraq without the anti-Daesh coalition's approval.

However, Salih Muslim, co-chairman of the Democratic Union Party (PYD), expressed doubts that Ankara could have kicked off the operation without the US-led coalition's approval in his Tuesday interview with Sputnik.