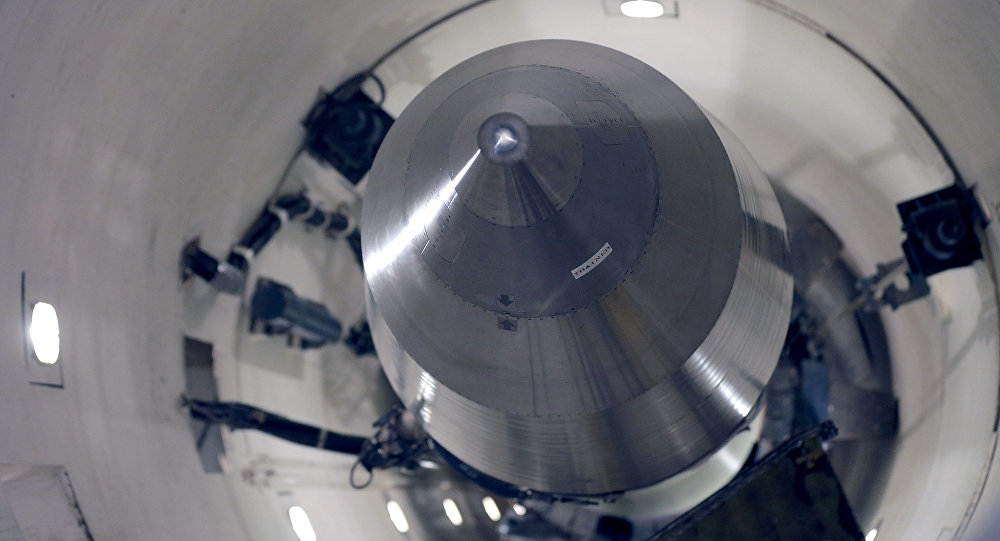 The test launch of the US nuclear-tipped intercontinental ballistic missile Minuteman III does look like a show of force amid growing tensions over North Korea, Russian military expert Igor Korotchenko told Radio Sputnik.

The US is about to test launch its nuclear-tipped intercontinental ballistic missile (ICBM) Minuteman III. Although the country's Air Force Global Strike Command insists that the test has no connection to the tensions simmering over North Korea, Igor Korotchenko, Director of the Center for Analysis of World Arms Trade (CAWAT), doubts the statement is entirely true.

"[The Minuteman III ICBM] serves as a strategic deterrent and demonstrates US readiness to strike a potential adversary," Korotchenko told Radio Sputnik.

© Photo : YouTube/ATFxclanxvids
US Holds War Games With Japan, South Korea Amid DPRK Tensions
"Every year, the US launches ballistic missiles from sea and land to confirm the operational utility of its strategic nuclear forces and to assess the technical characteristics of these missiles. Such missile tests are conducted by the Americans, and by us [the Russians], and by other countries of the nuclear club [on a regular basis]," he said.

However, he believes that despite the Pentagon's statements, there is a "certain military-political component" in the upcoming ICBM launch.

"As for this specific launch, it obviously has a military-political component, given the fact that the Americans continue to amass their [military] forces around North Korea. Therefore, at the given time this launch can more or less be regarded as military and political pressure on Pyongyang," Korotchenko underscored.

© AP Photo / Ahn Young-joon
It is Not Just North Korea But Asia That is in US Crosshairs
Dubbed by Boeing as the "backbone of the [US] nuclear deterrence triad," the land-based Minuteman III are due to be launched from California on Wednesday.

Meanwhile, the American strike group headed by the USS Carl Vinson is reportedly heading to North Korea in a show of force amid growing tensions in the region.

"It follows a two-day exercise with two Japanese destroyers as the Vinson group passed through the Philippine Sea en route to the Koreas," the media outlet reported, adding that the two exercises "demonstrate the ability of the US and Japan to work together at sea to respond quickly to threats in the region."

Washington's April 8 report regarding the USS Carl Vinson's alleged move toward the Korean Peninsula had exacerbated tensions dramatically, prompting Pyongyang to dub the supposed deployment of the US strike group in the Sea of Japan as a "reckless act of aggression" and threaten the US with a preemptive strike.

Commenting on the situation in the region, Russian Foreign Minister Sergei Lavrov warned against picking a military option while solving the Korean crisis.

"It is obvious that heavy-handed approaches that are beginning to be mentioned publicly are fraught with catastrophic consequences for the Korean Peninsula and the whole of Northeast Asia," Lavrov said. 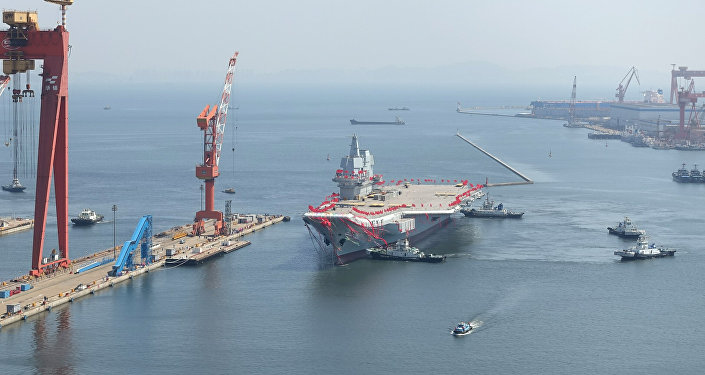 Moscow is not the only geopolitical player concerned with the escalation in tension over the Korean Peninsula.

On Wednesday Beijing launched the first-ever Chinese-made aircraft carrier, known as the Type 001A. The ship was constructed at the Dalian Shipyard, a port in northern China's Liaoning province, which shares a border the Democratic People's Republic of Korea (DPRK).

"The Type 001A is the country's second aircraft carrier, launching just over four years after the Liaoning, China's first, came into official service. While the  Liaoning, a refitted Soviet vessel, is classified as a training ship for the PLAN, the Type 001A will be the military's first combat-ready carrier which can guarantee the effective use of air power," the Chinese English-language media outlet Global Times reported Wednesday.

Perhaps, it is no coincidence that Beijing launches its aircraft carrier from the port closest to the DPRK, as the US strike group approaches North Korean waters and the Air Force Global Strike Command prepares to carry out its ICBM test.