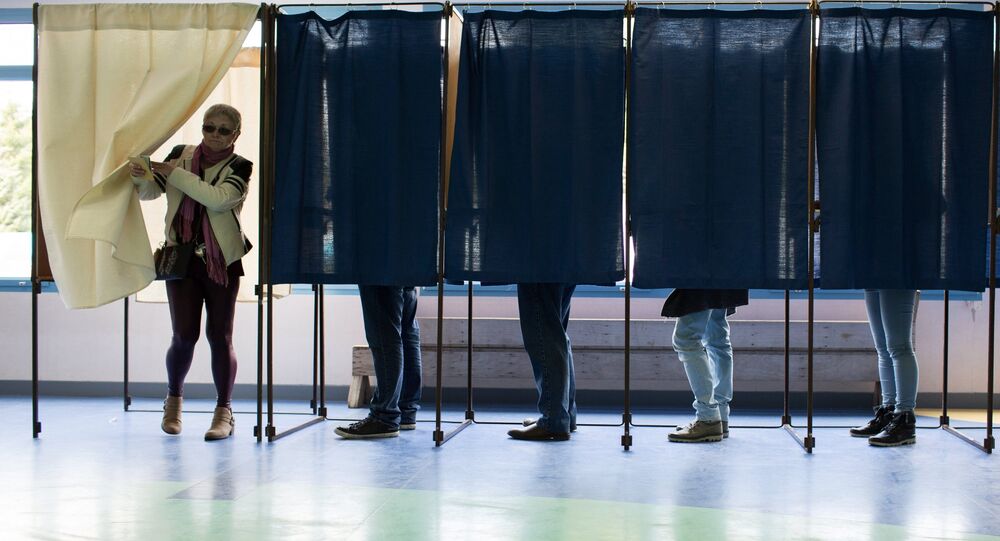 Emmanuel Macron of the centrist En Marche! movement and right-wing National Front leader Marine Le Pen won the first round of French presidential election, thus triggering a run-off on May 7.

MOSCOW (Sputnik) — On Sunday, the French citizens participated in the election in order to choose one of the 11 nominees to become the country's next leader after the end of incumbent President Francois Hollande's tenure. Ahead of the vote, Macron and Le Pen, as well as Republican candidate Francois Fillon and independent leftist Jean-Luc Melenchon had almost similar chances to make it to the second round.

However, fortune smiled upon Macron and Le Pen, who gathered support of 23.86 percent and 21.43 percent of votes respectively, with 97 percent of votes counted, according to the data published on the French Interior Ministry's website. Several media have published final results of the vote allegedly provided by the ministry, saying that Macron won 23.75 percent of the votes, while Le Pen got 21.53 percent. Both Fillon and Melenchon were supported by less than 20 percent of voters.

At the same time, Le Pen's result was mostly owing to the support of the French regions. In the country's capital she was backed by less than 5 percent of voters, while Macron won 34.83 percent of Parisian votes.

After the closure of the polling stations, Macron addressed his supporters promising them to bring hope and optimism to the presidential run-off, adding that he wanted to be elected president in two weeks.

© REUTERS / Benoit Tessier
Macron Forges Ahead After First Round of French Presidential Election
The politician said that he was grateful to his supporters for their contribution to his result as well as to Fillon and Benoit Hamon, the nominee of the Socialist party, who urged their supporters to back Macron in May.

Macron added that he should take steps to unite the French people and was planning to start "setting up a broad coalition for government and transformation."

Le Pen had also addressed her followers after the end of the Sunday voting process expressing gratitude for their support.

© REUTERS / Stephane Mahe
French Presidential Hopeful Le Pen Wins Some 5% of Votes in Paris
"You have led me to the second round [of presidential election] and I express to you, my voters-patriots, my deep gratitude. The first stage that must lead to the Elysee Palace is overcome," she said.

The politician called that the result of the vote "historic," adding that now she and her supporters have a significant responsibility to protect the French nation, its culture and values.

A number of both French and foreign politicians have congratulated Macron and Le Pen on their results in the first round.

The leader of the far-right National Front party has received less congratulations. Le Pen's result was welcomed by such politicians, as Matteo Salvini, the leader of the Italian party Lega Nord. The Italian Eurosceptic politician expressed hope for her victory in May.

The Sunday election was accompanied with a series of rallies across France. The distinctive feature of these events was the fact that several of them, like the one held at the Place de la Bastille square in Paris, opposed both Le Pen and Macron.

In order to calm down and disperse the protesters in Paris, French police had used tear gas and stun grenades. According to Sputnik correspondents, at least two people were injured in these clashes with police. At the same time French media reported about three people detained following the scuffle.

The rallies of people unhappy with the results of the vote took place not only in the country's capital. For example, hundreds marched across the French western city of Nantes throwing Molotov cocktails and breaking shop windows. Local police had dispersed the crowd using tear gas and rubber bullets as well as detained several demonstrators.