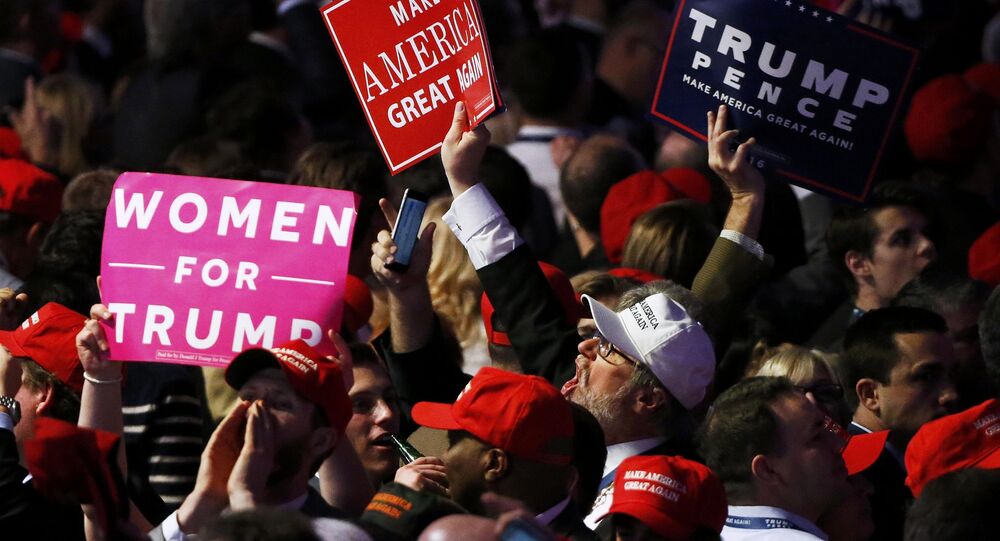 US President Donald Trump is approaching his 100th day in office, with the lowest approval rating of any president at that benchmark in 60 years. But poll results show those voters who put Trump in the White House stand by their choices.

© AP Photo / Andrew Harnik
Workplace Productivity Remains Unaffected by Trump-Related Political Talk - Poll
According to pollsters at ABC News/Washington Post, Trump's current approval rating is 42 percent. But when you look at approval rates for specific policies, support for The Donald gets considerably higher.

For example, 73 percent of respondents approve of Trump's campaign to create new jobs in the United States. This number includes Trump's traditional critics: Democrats, liberals and people of color.

Just shy of half — 46 percent — of respondents say Trump's handling of the North Korean situation is "about right.". A similar ABC/Post poll also reported 51 percent support for Trump's recent missile strike on Syria.

By contrast, Barack Obama was perceived by 53 percent of poll respondents, a majority, as being too weak and cautious on foreign policy at the 100-day mark.

While one might suppose that Trump's poor ratings are solely a representation of poor performance, they are rather indicative of a deep division within US voters.

For example, 96 percent of those who voted for Trump in November say it was the right thing to do, while only 2 percent regret their choice, according to a poll by Langer Research Associates produced for ABC News.

When compared to Hillary Clinton, only 86 percent of her November supporters say they'd back her again, should they have the opportunity to do so right now. According to ABC, this means the result of another vote would be very similar to the outcome of the actual election.

Respondents remain divided on whether Trump is keeping his campaign promises or on whether he is doing a better or worse job than expected. Half of poll respondents disapprove of Trump's decision to give relatives Ivanka Trump and Jared Kushner positions in his administration.